Kerala: Beware of the burn

The Indian Meteorological Department has warned that the heat wave will continue for two more days.

THIRUVANANTHAPURAM: Keralites have been caught unawares by the unprecedented rise in temperatures, heat wave conditions and sunstroke deaths.  The Indian Meteorological Department has warned that the heat wave will continue for two more days.   With relative humidity reaching 70 percent, the citizens feel  virtually suffocated.  Earlier, Palakkad district was prone to  extreme heat,  but now  Wayanad district is also experiencing it.

Despite the state government coming out with an action plan on climate change in 2014, the officials have been unprepared for  ‘sunstroke’  which has claimed at least six lives now. Dr. G. Babu Pillai, former environmental consultant with United Nations Environmental Programme (UNEP) for the environmental assessment of oil polluted sites in Ogoniland (the third largest mangrove ecosystem in the world) in Southern Nigeria, told DC that heat stroke is caused by failure of the body’s natural thermostat resulting in an inability to cool itself down by normal means.

“It usually occurs as a result of exposure to very hot surroundings. The onset can be sudden, resulting in unconsciousness in a matter of minutes. In such instances, medical assistance should be sought as soon as possible,”  said Dr. Pillai who is currently working for oil and gas companies in the Middle East. 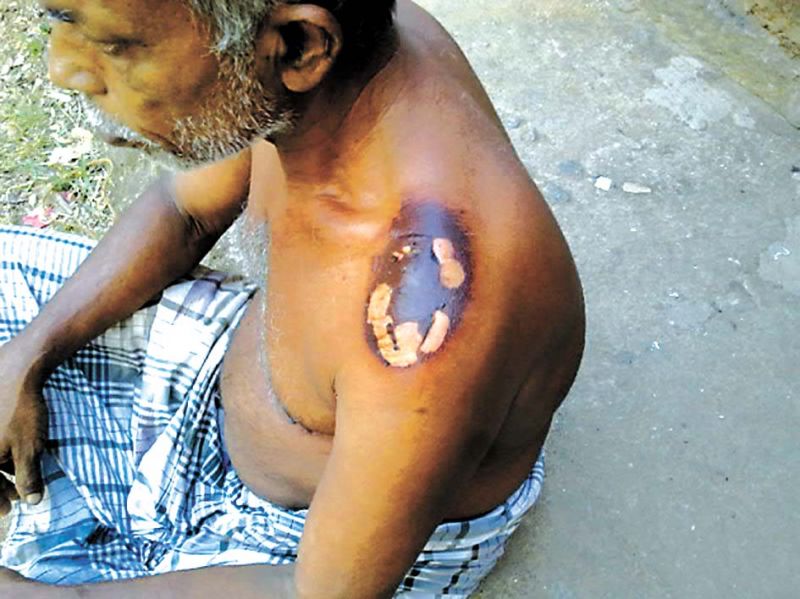 A man who suffered a sun burn. (Photo: DC)

Dr. Pillai with over  25 years of experience says there is no  limit for temperature for sunstroke. But, there is a term called heat index which is a combination of temperature and relative humidity. He  added that heat index chart is used to create the severity of heat index.

But Dr. K. G. Thara, head of Disaster Management Centre of Kerala Government,  told DC that it was  high time the state thought  in terms of long-term solutions.  She blamed urbanization for the rise in heat wave conditions.

“In the name of development, we are killing ourselves. We are cutting down trees which is like slow poisoning. Things have become very serious and it is hanging on our head like a Damocles’ sword,”  said Dr. Thara.

She says that 48 fully grown trees are used in the making of 500 rolls of paper napkins.  The people should take a vow to use only handkerchiefs made of clothes. Dr. Thara   demands that the government should ban all kinds of plastic bags and encourage the use of fountain pens instead of ball point pens.

Mariamma Sanu George, development consultant who is helping the Department of Health Services in coming up with a forecasting and surveillance system along with the Department for International Development (DFID) of UK government on climate change innovation,  feels that the action plan has to be revised with the evolution of new trends. Apart from Kerala, DFID is already associating with five more states--Assam, Bihar, Chattisgarh, Maharashtra and Orissa-- along with partial work in Tamil Nadu and West Bengal.

“Until last year, Keralites  had thought  that climate change is not applicable to us. But now the action plan has to be revised which was done along with nine sectors like agriculture, animal husbandry, coastal and inland fisheries, forest and bio-diversity, water resources, health, energy, urban and tourism”, said Ms. George.

She feels that swift action has to reach the grassroots level.  The health services department has demanded to have a forecasting and surveillance system where the final report is expected to come out only after  years. Ever since the summer season started, dermatologist Dr. Rajesh Nair of Skin Care Med Spa in Thiruvananthapuram and Ernakulam has been inundated with patients who come to him with complains of sun burn and heat rashes (Miliaria).

“This year, I have been getting many patients, especially women who come with complaints of heat rashes who are actually staying indoors. If earlier, I could treat them with calamine lotion and anti-allergic tablets, now I have to prescribe antibiotics”, said Dr. Nair who advises people to wash their body two to three times  daily to prevent heat rashes.

MET centre director K. Santhosh is optimistic of mercury levels coming down in the next few days with the onset of summer rain. He says so far there has been 50 percent deficiency in summer rain compared to last year.  Only isolated rain has been received across the state so far this year.