Kochi Metro runs up to Maharaja’s

An interior view of the Jawaharlal Nehru Stadium station.

Kochi: Kochi Metro is all set to extend services to MG Road, the Central business district of the city, on Tuesday when Chief Minister Pinarayi Vijayan will officially commission the five-km Palarivattom-Maharajas Ground section. The opening of the second reach of Phase One is expected to increase ridership in a major way with officer goers and regular commuters now expected to depend on the modern transport system. The development is also expected to ease traffic congestion woes experienced at several stretches like Deshabhimani Junction and Kacheripaddy.

“The Metro is meant to reduce pollution and congestion which will only happen if it can attract people traveling in private vehicles. For a car owner, a Rs 50 fare from Aluva to Maharajas may not be an issue considering the time and fuel cost saved. KMRL is also trying to provide some value additions to attract them to public transport,” said a senior metro official. The second stretch extends from Jawaharlal Nehru Stadium to Maharajas College with five stations – JLN Stadium, Kaloor, Lissie, MG Road and Maharaja’s Ground. Encouraged by the wide response for myriad theme-based decorations of stations in the first reach (13 km Aluva-Palarivattom section), Kochi Metro Rail Ltd (KMRL) has handpicked themes for all five stations. 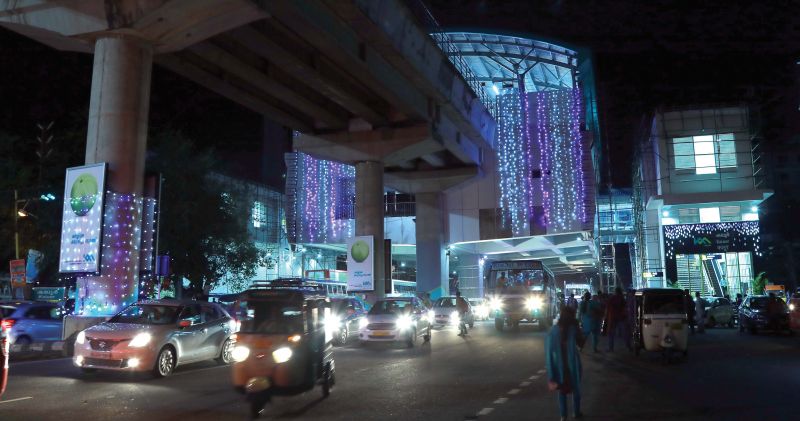 Views of the new stations.

A visit to the Jawaharlal Nehru Stadium station will be a visual treat on the state’s rich sporting Heritage like ‘kalaripayattu’ along with other modern sports like Hockey. Even staircases are designed like synthetic tracks. “We were running against time to open the section for traffic before the start of the U-17 FIFA World Cup on October 7. The participants and spectators are expected to depend on the metro,” the official said. The Kaloor metro station will be designed with the theme “Monsoon, Waterfall & Water Bodies”, capturing the aesthetic beauty of luscious waterfalls and green mountains of Western Ghats.

Lissie, the 14th station from Aluva, will be designed with the specified theme Dragonflies & butterflies of Western Ghats.  Maharaja's Ground, the last station, will be developed on the theme ‘endangered species and mammals of Western Ghats’. “MG Road is one of the six major metro stations that has been assigned with a specified theme -- “Ernakulam and its History”. MG Road itself was the commercial high street of Kochi for centuries ,” the official pointed out. 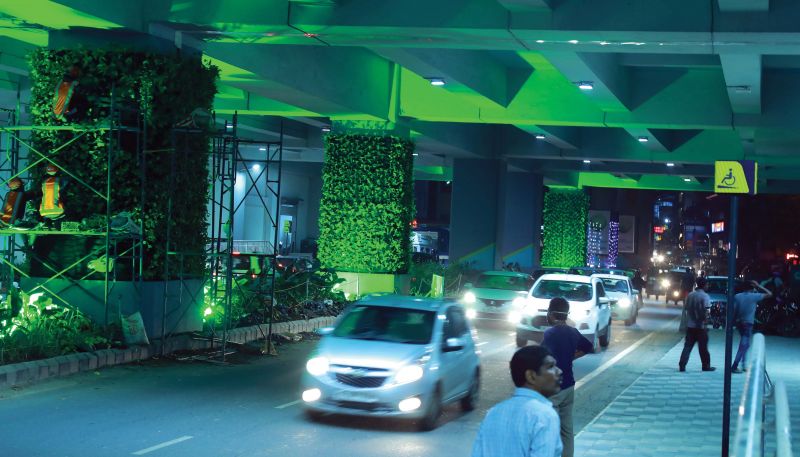 A night view outside the JLN Stadium station.

Chief Minister Pinarayi Vijayan will arrive at JLN Stadium Station at 10.30 am along with Union Housing and Urban Affairs Minister Hardeep Singh Puri for flagging off the Kochi Metro train upto Maharaja’s College.  They will then take the train ride on the second reach of the Kochi Metro from JLN Stadium Station to Maharaja’s College Station along with the Mayor, MPs and MLAs and come back to Kaloor Station, from where they would proceed to Ernakulam Town Hall for the public function, marking the launch of Kochi Metro into the city. 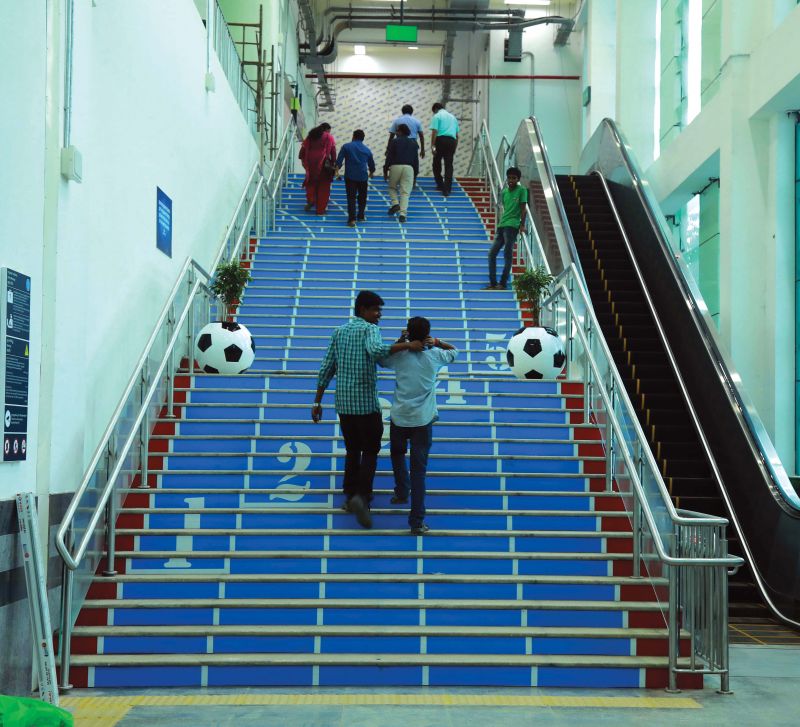 Staircase of JLN Stadium station set up on the synthetic track theme.

There will be no cut in the frequency of metro trains when the services are extended to Maharaja’s Ground on Tuesday, following the commissioning of the second reach. Kochi Metro Rail Ltd (KMRL) expects the daily ridership figures to double and touch 75, 000 commuters. “The frequency of trains will be the same – nine minutes during week days and seven on weekends and holidays. The number of rakes will be increased from the current six to nine with another two kept as back-up,” a senior metro official said.

The maximum fare has been fixed at Rs 50 (Aluva-Maharaja’s Ground section) while the trains would take 30 minutes to cover the 18-km stretch. “However, the commuter needs to pay only Rs 40 to travel from Aluva to Jawaharlal Nehru stadium and Rs 50 to the rest of the four stations,” the official said. However, the authorities made it clear that there would not be any cut in fares though monthly and daily cards will be provided to regular commuters offering upto 40 per cent discount.

“Now that the service reaches the city, we can determine the number of regular commuters and the tourist ridership. The discounts will be determined after analyzing the ridership figures,” the official said. Meanwhile, the new stations – all of which are built on specific themes, will display more Malayalam quotes. For instance, visitors would be welcomed by excerpts from ‘Jnanappana’ written by 16th century poet Poonthanam. The feeder buses too will be deployed in full from all the 16 metro stations. The feeder services include those to Aluva-Paravoor road, Masjid road, towards Pathalam, Kunnatherry-Ambattukavu Road, HMT Road, University Road, towards Vattekunnam, towards Trikkakkara Temple, Manjummel Road, NGO quarters, Edapally-Pookattupady Road, Edapally-Ponekkara road and Stadium Link road among others.

SC issues notice on plea for rehabilitation, vaccination of beggars amid pandemic