Shivalli, where Shaivism waits to be rediscovered

The spot where the cave is at Perampalli near Udupi.

There are many ancient sites which bring the twinkle back in the eyes of historians, where bygone generations a few thousand years ago, lived and toiled and also made sure they left relics of their culture and life for their kind in a future age to study and contemplate on. Few would known that in Shivalli, a little known village near Udupi, where the famous Krishna Math set up by Madhvacharya, the proponent of Dvaita philosophy, is located, lies hidden a treasure trove of information under the earth, waiting to be discovered anew. This came to light when a Chalcolithic site was found recently which proved that Shivalli was a religious centre which witnessed  continuous habitation for about 3,000 years! And what’s more ironic is the fact that Shivalli’s historic value came to light during something as simple as the preparation of land for staging a Yakshagana play! Gururaj A. Paniyadi profiles this unique habitat which breathes history from every grain of sand and could tell us a lot more about who we are and how the Shaivite culture evolved across the ages

Shivalli, now familiar to people as Perampalli, is a village between Udupi and Manipal situated one km south of the Swarna river. About two weeks ago, the Shivattaya family of Perampalli discovered a small cave like structure when their land was being prepared for a Yakshagana play of Kateel Mela. 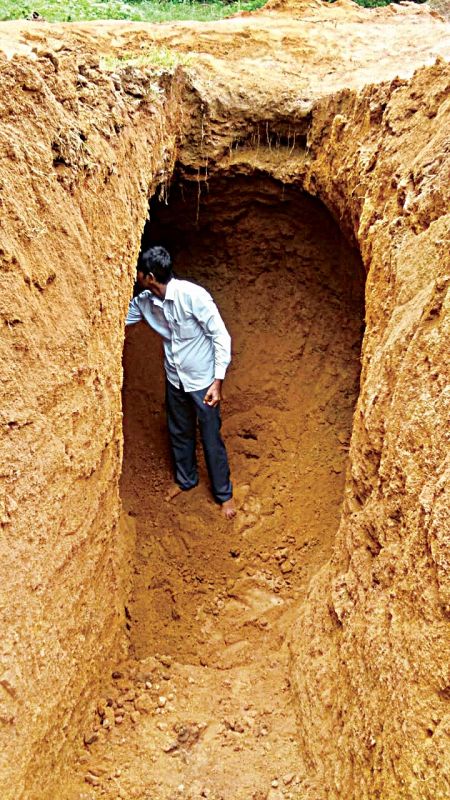 The cave-like structure at Perampalli.

As it had rained a few days ago, the soil had become loose which helped the family spot a small cave which was brought to the notice of Prof. T. Murugeshi, historian and Archaeology Professor at Shirva MSRS College. Mr Murugeshi and his team initially suspected it to be a megalithic burial ground but they did not find the capstone which is usually found on the top of the cave.

Hardly did they know that they were entering one of the oldest prehistoric burial sites in the region! There was virtually a treasure waiting for them – not gold or gem stones, but something more precious – various types of pottery that could throw light on prehistoric settlements. 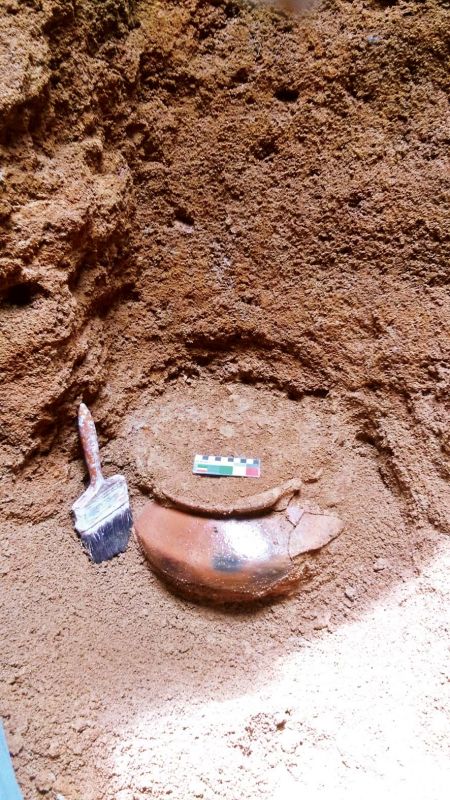 The pot found inside the cave.

On excavation, Prof. Murugeshi initially got a black and red ware pot which is typical of the Megalithic age. “We noted that the entire cave was dug not in laterite stone but in the soil. This is the first time such a cave has been discovered. Usually, a cave is dug only in laterite stone,” Prof Murugeshi explained. The team had a tough task removing the sand carefully ensuring none of the pot pieces were damaged. After removing about 5 loads of sand, they saw an intact red ochre pot about 7.5 feet below. The pot had become fragile due to weather conditions and broke but it and the material it contained were collected and sent to Deccan College in Pune for studies.

The cave also had three stone tools used to carve it out of the soil. It indicates that people of those ages believed that all material used for the dead and for cremation should not be taken back but should be placed inside the cave itself.

“As we do not have any strong proof to date it to the Neolithic age, we prefer to call it a Chalcolithic Megalithic cave,” the professor said adding that this was the oldest burial cave found till date in the region.

The new discovery could throw more light on the antiquity of Shivalli as a religious site. “ This discovery is very important in the study of Udupi history as we now have proof that there were inhabitants here about 3000 years ago,” the professor said. Udupi became an important religious place at least since the 8th century. Some scholars opine that initially Shivalli was the religious headquarters which in later years might have shifted to the present day Udupi.

There are several inscription which throw light on the importance given to Shivalli and how it was revered. Shivalli means Village of Shiva (Shivana Halli) and still has an old temple dedicated to Lord Shiva. The recently discovered Chalcolithic Megalithic cave is about 1 km from this temple!

Just a few metres away from the cave is the 'Tangodu Temple,' where historians have found idols dating back to the 8th and 10th century. All these indicate that the place was once a centre of religious and cultural activity. But later, the religious hub moved from Shivalli to  Udupi. Sri Anantheshwara Temple received importance during the age of Advaitha and later the Udupi Sri Krishna Math was founded by Sri Madhwacharya which rose to prominence with Shivalli gradually forgotten. Incidentally, the Udupi Brahmins, also called Shivalli Brahmins, have got their name from this place.

“We knew that Shivalli was important and was equated to Kashi. But now it looks like Kashi and Shivalli are both pre-vedic Shaivite centres,” Prof. Murugeshi said.

Lord Shiva lords over every Hindu’s life in the modern age where science and technology may have made mindboggling advances but faith continues to wield its magical influence on our minds. Does Shivalli, like Kashi in the north, hold the secrets to the evolution and domination of the powerful Shaivite philosophy which has intrigued scholars over several centuries? Is there something more waiting to be discovered in this little habitat which could help every Hindu rediscover himself, his thought processes and his ways of living? History waits for an answer and so does Shivalli.

Bengaluru braces up for urban flooding

In Mumbai, civic staff lock up an entire housing society of 18 buildings