A shot for longer innings

BJP president Amit Shah is having close look at his own reflection in the mirror inside the lift of the government guest house in Kochi on Friday. Shah arrived in Kochi as part of his three-day Kerala visit. (Photo: SUNOJ NINAN MATHEW)

Thiruvananthapuram: Cardinal Mar George Alencherry and Verapoly Archbishop Joseph Kalathiparambil have done the honours, hosting BJP president Amit Shah at the Renewal Centre in Kochi on Friday but a large section of the flock feels betrayed by their silence over the raging issues of cattle slaughter curbs and “the disregard of the Federal norms” at the meeting. Syro Malabar Church spokesperson Jimmy Poochakattu confirmed to DC that the slaughter restrictions and “ban” were not raised at the closed-door meeting. This confirms the clergy’s fears of a conscious effort by the bishops to play it safe by not commenting on the beef controversy. “None of the bishops thought it essential to join the public debate on beef ban. Is there an understanding among the Church leaders to remain silent than fall afoul of the Modi regime?” asked a vicar, who pleaded anonymity. However, he said, bishops heading dioceses in north India have been “vociferous in criticising the Centre because they are the direct victims of the majoritarian policies being imposed on the country”.

Critics say the Renewal Centre meeting is salient for what has been left unsaid than what has been said. Demands to use the full might of the Centre for the release of Fr Tom Uzhunnalil and steps to shore up rubber and fisheries are but community-specific concerns and seem narrow when uttered exclusively at such a conclave. “Unsaid at the meeting has been the Church’s commitment to the concept of basic humanism and Christian concerns, empathising with sufferings of fellow human beings, be it at the hands of the rulers or an unjust social order. If our bishops stood beholden to the powers-that-be and forgot to share the Church’s concerns with the BJP chief, then it unnerves us all”, said another senior priest. According to insiders, many others invited to the meeting never turned up. There was no prelate worth the name from either the Jacobite or Orthodox Church.

Possibly the conclave at the Catholic centre prompted the rest of the Church leaders from evincing an active interest when they could engage Mr Shah directly. A prominent at the meeting face was Marthoma Metropolitan Joseph Mar Thoma. A section of the clergy felt that the BJP was mollycoddling Christians and ignoring Muslims, hoping to gain a leeway in the State’s coalition politics. Social critic M N Karassery said this was not right. “The BJP has already built bridges with the Sunni faction, led by Kanthapuram A P Abubacker. They were the only one to be invited to a pan-Indian Sufi meet organized by the BJP in Delhi last year. So BJP is being selective, handling one at a time. One can’t blame the BJP for it because it needs to reach out”, said Prof Karassery. The Renewal Centre meeting also shows Mr Shah’s adroitness in taking on board community leaders and laying foundations for a longer innings. Series of such meetings help lessen inhibitions in minds of the faithful and the cadre. The dialogue Mr Shah has initiated will help the party appear accessible to the very same sections it is at loggerheads most of the time.

The BJP president Amit Shah has assured a group of Christian bishops that he would bring the issues raised by him to the attention of the Union Government. In closed door meeting with the BJP president at the Renewal Centre in Kochi on Friday Cardinal George Alencherry Syro-Malabar Church and six bishops of other Christian churches raised the problems faced by Christian minorities in the country and the difficulties of farmers in Kerala including the fall in price of rubber. They have told the BJP leader the concern in the attacks against Christians and Christian institutions in different parts of the country.

The bishops have also called for a more proactive role by the Union Government for freeing Fr. Tom Uzhunnaill abducted by terrorist at Yemen. Rubber farmers are in dire-straits due to the unbridled import of the commodity and the fall in price, they pointed out. The bishops also called for protecting the life and property of fishermen. Shah said that he would bring the concerns to the attention of the union government. The BJP president informed the bishops that non-cooperative attitude shown by state governments towards pro-farmer policies of the union government. He also blamed the international agreements signed by previous governments for the fall in price of rubber. Mr. Shah however promised that the government will be asked to think about imposing curbs on rubber imports. On the atrocities against the Christians he said the law and order is a state subject. 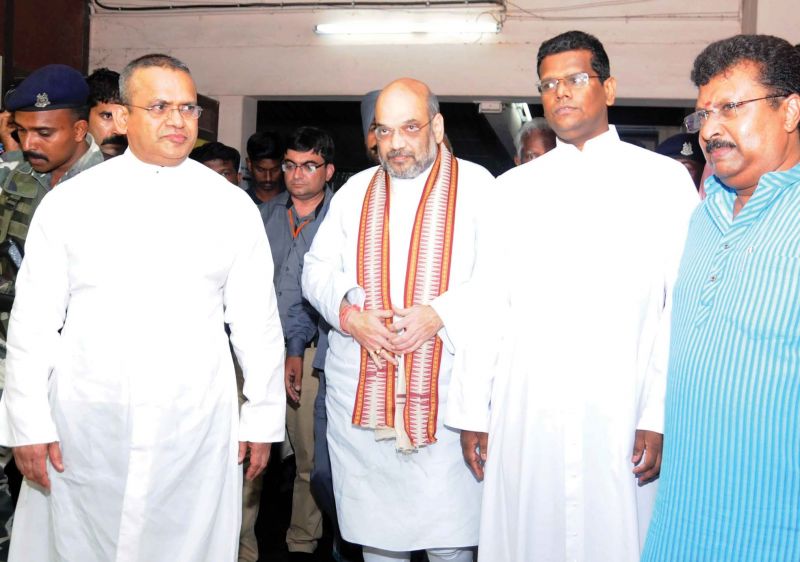