Palakkad/Kozhikode: Young politicians M.B. Rajesh MP  and  V.T. Balram and T.V. Rajesh MLAs took a bold educational step on Thursday.  They enrolled their children in  government schools at  Palakkad, Thrithala and Vilayankode respectively  to prove that government schools are also centres of excellence. Their action came at a time when  most politicians and government officials in the state,  including government teachers,  prefer  to enrol their wards in  top private, CBSE and central schools.

Mr  M.B. Rajesh in his Facebook page announced that he was enrolling his second daughter Priyadatha in Palakkad East Yakkara Government Lower Primary School in class one. His eldest daughter Niranjana was taken to Government Moyan Model Girls Higher Secondary School in class VIII. The MP also keeps a note for the nearly 800 people who approached him for 10 of his quota seats for admission to Kendriya Vidyalaya.   “At least the people whose children couldn’t get into the Kendriya Vidyalaya would understand my position now,” he adds. 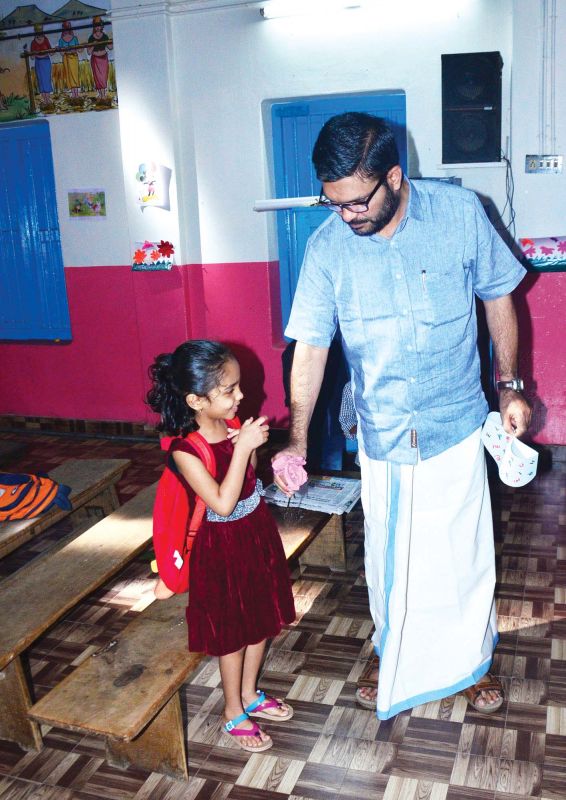 Mr T.V. Rajesh  took his son to his alma mater St Mary’s Upper Primary School (Aided), Vilayankode,  Kannur. Already his daughter is a student of the same school. The MLA himself inaugurated the celebrations at the school on Thursday.   He said the school has four divisions in class one, which is an indication of the Pinarayi government’s campaign to promote schools in public education system. Mr Balram,  MLA from Thrithala, said in his  Facebook post that  their decision to enrol  their children in government schools was  part of his effort to instil  confidence among  the public that government schools are  also centres of excellence.

He would work towards further improving the academic quality and facilities  of government schools in his Assembly segment, he said. After enrolling his son Adwaith Manav in  Areekode Government School in Thrithala,  he inaugurated the Praveshanolsavam at the school. “I didn’t come here just as a people’s representative to inaugurate the ‘Praveshanolsavam’ but also as a parent to get admission for my son,” he said. Everyone, including people’s representatives, must get their children admitted to government schools, he added.

Over 5.68 lakh devotees turn up at Lord Venkateswara shrine during Brahmotsavam

KCR casts his eyes on AP; visiting Vijayawada on Oct. 18