Having travelled to most places in the world, I never felt as safe as I do in Chennai. I think it's the culture that has the influence on 'feel safe’ factor. Chennai is very approachable, you can ask anyone on the road for anything, whether its directions, or suggestions of where to shop or eat—a Chennaiite would never shy away. I've heard this from a lot of my friends who visit the city. Surya Dinkar, Entrepreneur

Madras for many is not a city but an emotion. From the glistening beaches of Marina to the bustling Central station, from the fishing grounds at Kasimedu to the silver sands of ECR, a myriad of memories flow through its length and breadth for all of us who call it home. As the city turns 380 years old, here is what makes Madras day so special over the years.

The entry of East India company was transacted on August 22, 1639, on the land where Fort. St. Ge.rge stands today. The deal was struck by Francis Day, Beri Thimmappa, and Andrew Cogan, with the local Nayak rulers. It is believed that this deal was made on August 22, 1639. Settlement grew around the fort. Then the villages around it were brought together. And then, the old and new towns linked up to form what is now called Chennai, with all its glory. Soon the city grew multifold not only in population but in every sectors- be it education, healthcare, IT, history, tourism, auto industries, movies, etc.

Haggling with the autokaarans, swearing at the humidity, cursing the Mount Road traffic, is what comprises a Chennaiite. But there is a lot of fervor attached to the term Madraasi- a Madraasi is made of elai sapadu, Satyam's popcorn, Marina's sundal- bajjis and Rajni's moves. There is more to the city's heritage than what meets the eye and every corner has a story to tell. Madras Day is the day which celebrates this spirit of the city every year. 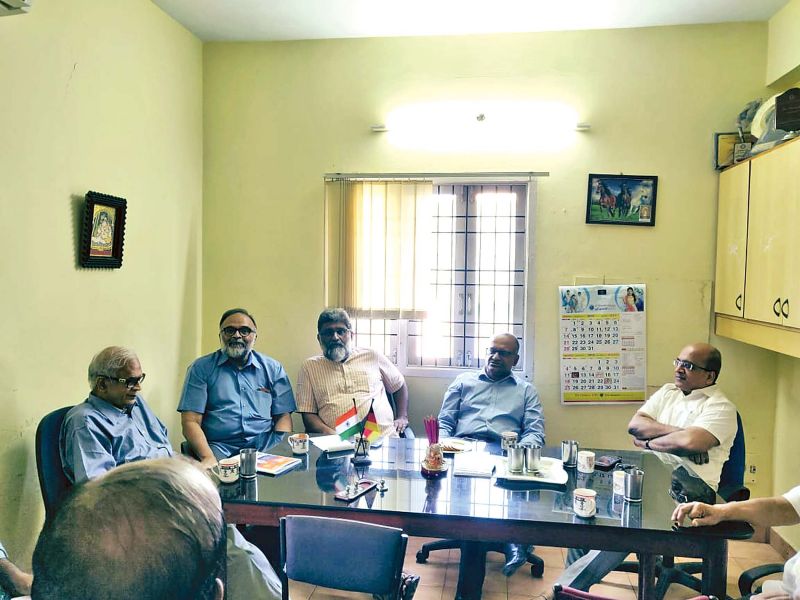 An idea that started with three people put together - the city's famed historian, late S. Muthiah, journalist Sashi Nair and publisher Vincent D' Souza. Later, they were joined by three others - senior journalist and editor Sushila Ravindranath, journalist and website entrepreneur Revathi R and entrepreneur and writer-historian V. Sriram. What began as Madras Day on August 22, 2004 and expanded to Madras Week is now Madras Month!

“Madras Day focuses on the city, its history, its past and its present and the core team motivates communities, groups, companies and campuses in the city to host events that celebrate the city”, says Vincent. “Heritage walks, school exchange programmes, talks and contests, poetry and music and quiz, food fests and rallies, photo exhibitions and bike tours . . . these and more are the ways in which the city is celebrated”.

Over the years, somehow, Chennai has managed to evolve retaining the old and new. Today, Madras day has events and participation for all ages. “Even the young love going back into time, into heritage and into the classic while they enjoy the 'now' life. So while there is some fun events, most are focussed on our histories. And there is pride in celebrating that”, says Vincent.

Sridhar Venkatraman, a social activist, conducts food walks in the city and has been the food walks that are held for Madras day. “I try to align the theme towards historical locations of the city like Mylapore, Sowcarpet, Pursaiwalkam, with food joints which have been around for a long time and present bits of history about the localities we visit,” he says. “I have had participants across all age groups and it is an interpersonal interaction of sorts across cultures and ages which lacks in this age of social media.”

A volunteer-driven celebration of this nature is not an easy task to accomplish. One has to coax, encourage, talk to and discuss with potential hosts to get an event going. Yet, every year, there is freshness, newness and more voices and events. The Madras Day movement is a process.

It has evolved its own way over the past 15 years. “It has garnered a respect for the heritage and pride in the city's uniqueness by people coming together voluntarily- young and old alike. I would let Madras Day be what it is. And grow naturally”, adds Vincent.

The info on the events is available at www.themadrasday.in and will be updated every day through August 2019.