Members of the family were tested for coronavirus after the funeral in Mandya district of Karnataka.

Mysuru: Four people who brought a dead man’s body from Mumbai for cremation in his native place in Mandya district in Karnataka have tested positive for Covid-19 virus, and now the administration is trying to find out if the man himself had been an undetected positive.

According to Mandya district deputy commissioner M V Venkatesh, the deceased man was a 53-year-old native of B Kodagalli of Pandavapura taluk, Melkote hobli in Mandya district. He died after suffering a heart attack at the U N Desai government hospital in Mumbai on April 23. 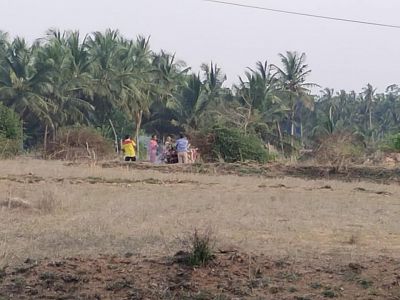 The cremation took place outside the man's native village after the local administration refused to allow it inside the village.

Wanting the final rites performed in his native place, the man’s family got the body embalmed and procured all the medical records and certificates from the hospital and brought it in an ambulance belonging to the Desai government hospital.

When they reached Pandavapura taluk in Karnataka on the evening of April 24, the local administration did not allow the body to enter the village but allowed the relatives to cremate it outside the village.

And since the family had come from Mumbai, the district administration quarantined all seven of the man’s relatives, and their samples were sent for testing on 28 April.

The results showed that the deceased man’s 25-year-old son, daughter-in-law, daughter, and two-year-old grandchild are positive for Covid 19. All of them have been admitted at the Mandya Institute of Medical Sciences although they have no symptoms.

Deputy commissioner Venkatesh said that in the Desai hospital records in Mumbai there was no mention whether or not the man had been tested for Covid-19. “We are writing to Desai hospital to clarify if the deceased person was tested for Covid 19. It is also possible that the family got infected by the man’s son who works in the loan department of ICICI Bank in Mumbai and visits several offices in different areas of Mumbai,” he said.

The man’s ancestral B Kodagalli village now has been sealed off. Though tests done on other members of the family have come back negative, the Mandya administartions plans to repeat their tests.

So far 26 people have tested positive for Covid 19 in Mandya district.

BJP gears up for Huzurabad byelection

English medium must at under graduate level in Andhra Pradesh