Ahmedabad: Prime Minister Narendra Modi unveiled the 'Statue of Unity' in Gujarat's Narmada district on the birth anniversary of Sardar Vallabhbhai Patel today. He reached Kevadiya Colony near the Sardar Sarovar Dam in Narmada district on Wednesday morning for the event.

The 182-metre structure of Sardar Vallabhbhai Patel is the world's tallest statue. It is twice the height of the Statue of Liberty in the US and is built on Sadhu Bet, an islet near the Sardar Sarovar Dam.

Apart from the main attraction, the venue also has a viewers' gallery at 135 metres height. This gallery can accommodate up to 200 visitors at one time. It offers a spectacular view of the Sardar Sarovar Dam, its reservoir, and the Satpura and Vindhya mountain ranges.

The statue has been built using over 70,000 tonnes of cement, 18,500 tonnes of reinforcement steel, 6,000 tonnes of structural steel and 1,700 metric tonnes of bronze, which was used for the outer cladding of the structure.

11:45 am: Prime Minister Narendra Modi inaugurates Wall of Unity on 143rd anniversary of Sardar Vallabhbhai Patel at Kevadiya in Gujarat.

11:20 am: "I am amazed when some people of our own country dare to see this initiative from a political view and criticize us like we have committed a huge crime. Is remembering country's great personalities a crime?" PM Modi said.

11:05 am: Prime Minister Narendra Modi says, "If it was not for Sardar Sahab, then we Indians would have to take visa to see the Gir lions, pray at Somnath, or to see Hyderabad's Charminar."

#WATCH: Prime Minister Narendra Modi says, "if it was not for Sardar Sahab's resolve, then we Indians would have to take visa to see the Gir lions, pray at Somnath, or to see Hyderabad's Charminar". #StatueOfUnity pic.twitter.com/RfAu3tOSyu 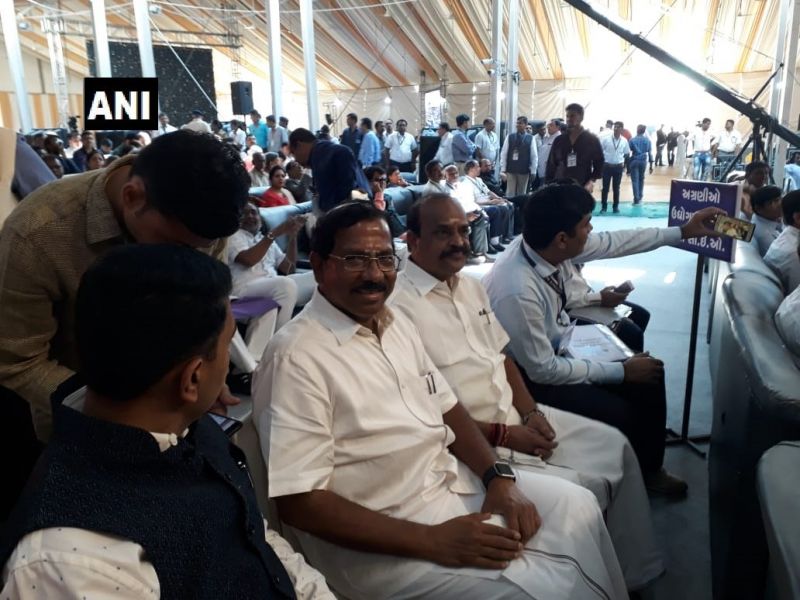 10:50 am: "This is a project we thought when I was the hief minister of Gujarat. To build the Statue of Unity, lakhs of farmers from all over India came together, gave their tools, portions of soil and thus, a mass movement started," says PM Modi.

10:45 am: PM Modi addresses the gathering, says, "Events like today are very very important in a country's history and such events are difficult to erase. It is a historic and inspiring occasion for all Indians. I am fortunate to dedicate this statue of Sardar Sahab to the nation."

10:40 am: Watch: Inauguration of the Statue of Unity -- world's tallest statue. 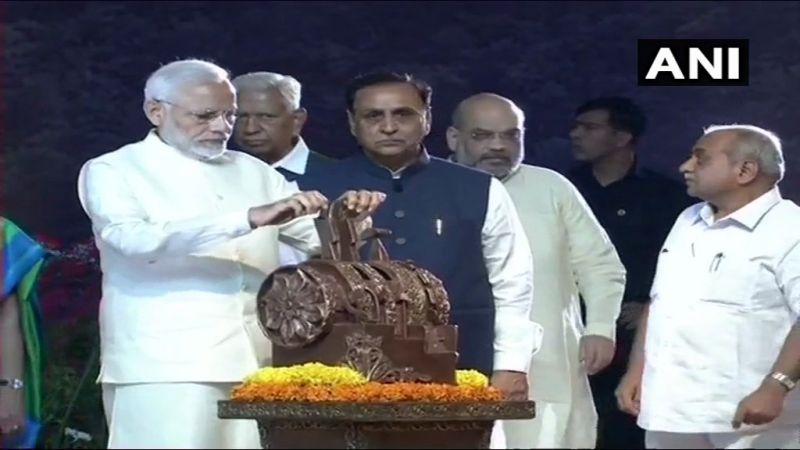 09:30 am: PM Modi visits Tent City ahead of unveiling of the statue.

09:00 am: At the launch ceremony, PM Modi will pour soil and Narmada water into a 'kalash' to mark the dedication of the statue. He will then arrive at the Wall of Unity to inaugurate it. At the feet of the statue, Modi will perform a special prayer to mark the occasion.

08:45 am: Defence Minister Nirmala Sitharaman, who is in Chennai, said, "Post our freedom movement, Sardar Patel worked hard to get more than 550 princely states together to make India one. It's only right that we remember him today."

08:40 am: Prime Minister Narendra Modi's reaches Kevadiya in Gujarat. He will inaugurate Sardar Vallabhbhai Patel's Statue of Unity in a short while.

08:35 am: Defence Minister Nirmala Sitharaman flags off and participates in Run For Unity in Chennai on the occasion of Rashtriya Ekta Diwas. 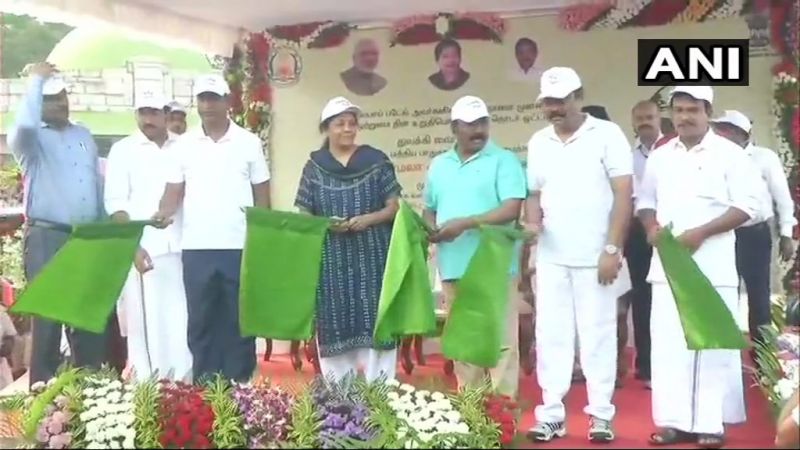 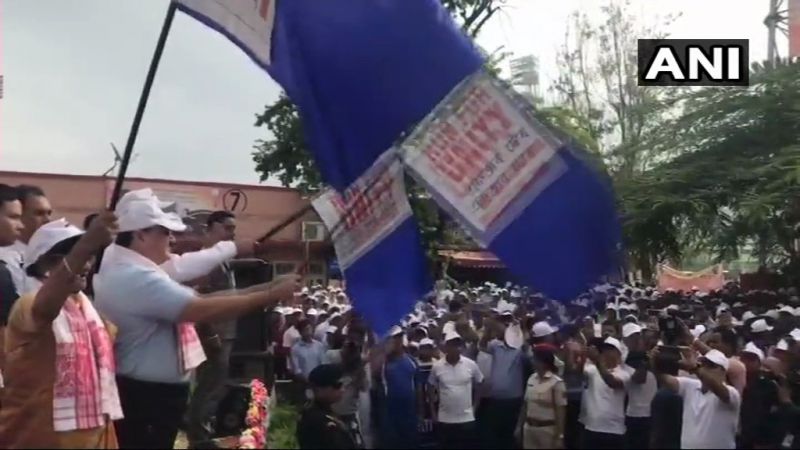 08:25 am: Visuals from Kevadiya, Gujarat, ahead of the inauguration of Sardar Vallabhbhai Patel's Statue of Unity today.

Gujarat: #Visuals from Kevadiya ahead of the inauguration of Sardar Vallabhbhai Patel's #StatueOfUnity pic.twitter.com/MYtc0dAEaX

08:20 am: Paying homage to Sardar Patel on Rashtriya Ekta Diwas, Sports Minister Rajyavardhan Singh Rathore said, "Sardar Vallabhbhai Patel's statue which is the tallest in the world should have been made years ago. India has today paid tribute to a man who built India." 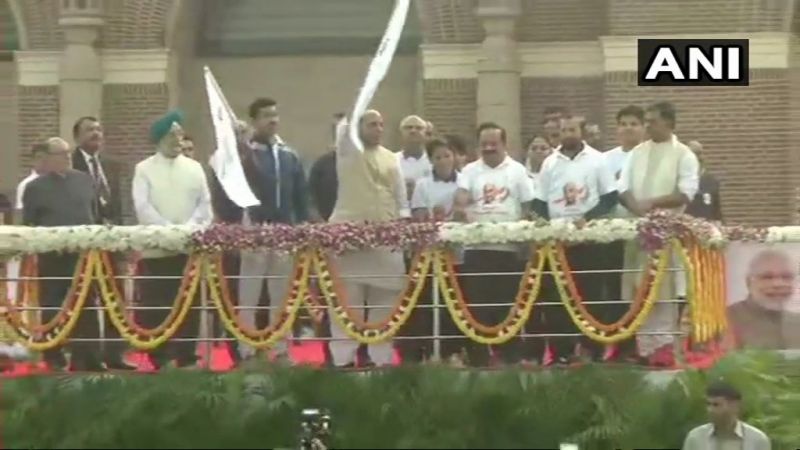 07:20 am: PM Narendra Modi tweets ahead of the unveiling of the statue.

"We bow to the great Sardar Patel, the stalwart who unified India and served the nation tirelessly, on his Jayanti."

We bow to the great Sardar Patel, the stalwart who unified India and served the nation tirelessly, on his Jayanti.

07:15 am: At a special function held at the capital's Patel Chowk, the President and others paid floral tributes at the statue of India's first Home Minister on his 143rd birth anniversary, which is observed as 'Rashtriya Ekta Divas'