The figures were released by the state police headquarters on occasion of World Day Against Trafficking in Persons on July 30.

Hyderabad: Despite the police taking stern action against traffickers, children are continued to be employed as labourers in the state. As many as 5,448 children who were forced to work as labourers were rescued in just two months this year, while the total number of rescued children since 2015, totals 25,834. The police carry out rescue operations twice a year, in January and in July.

The figures were released by the state police headquarters on occasion of World Day Against Trafficking in Persons on July 30. 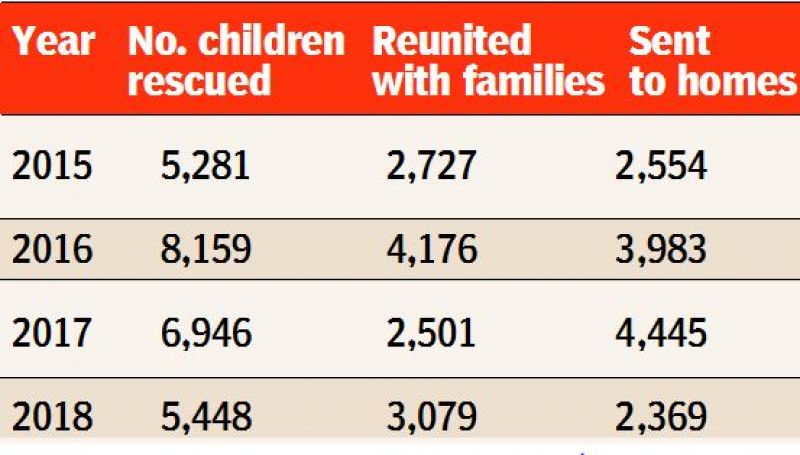 In Rachakonda, about 501 children were rescued by the police during Operation Smile — IV programme from July 6 to July 30. Out of them, 273 boys and 93 girls hail from Telangana, while 135 others including five girls, hail from other states.

Rachakonda police commissioner Mahesh Bhagwat said, “Around 65 boys were rescued from brick kilns located on the city outskirts and 11 cases have been booked against the management and owners for engaging the children at the plant. Three children who went missing from Nacharam and Medipally were also rescued during Operation Muskaan — IV this year while the number of children rescued last year totaled 815.”

Director General of Police, M. Mahendar Reddy on Monday released a first of its kind training manual for the police on victim-centered investigation consisting of laws, raid process, investigation procedure, legal framework and post-rescue procedures in a human trafficking case.

“The manual will be used to train all the front-line officers in the state equipping them with necessary skills to combat human trafficking,” the DGP said.

One woman rescued every three days in Rachakonda

The commissioner said the police always maintained continuous surveillance to rescue trafficked women. As many as 68 places used as brothels were seized and five persons were booked under the Preventive Detention Act for involving in the offences repeatedly.

He added that 549 people, including 341 traffickers and 208 clients, were arrested in as many as 170 cases at various police stations in the commissionerate limits.

US Consulate Consul General Katherine B. Hadda, who was the chief guest at the programme organised by the commissionerate, said, “In many cases, it is difficult for a state to understand the living conditions of residents after they migrate to different places. And likewise, many destination states tend to treat migrant workers as visitors who are not their immediate responsibility. But, in this instance, both the source state and destination state have proactively made it their shared responsibility to engage with non-governmental organisations and employers to address the schooling needs of the children of migrant brick kiln workers.”

According to the Cyberabad police, Telangana and Andhra Pradesh stand second in human trafficking after West Bengal. They are followed by Maharashtra and Tamil Nadu.

“Human trafficking is one of the largest organised crimes across the world after drugs and arms and no country is immune to this. In India, both Telugu states stand second in human trafficking after West Bengal. As many as 950 cases of trafficking for flesh trade were registered in Telangana between 2014 and 2017,” said the Cyberabad police.

527 fishing boats back to shores before Cyclone Jawad

MoS defence: We have secure border, can give reply to enemy