Bengaluru: The Common Entrance Test results were announced on Tuesday, with students from Bengaluru and Mangaluru emerging with flying colours. Incidentally, this is the first year in which medical seats (which will now be allotted through NEET) have been left out of the CET.

Medical education minister Dr Sharan Prakash Patil and Higher Education Minister Basavaraj Rayareddy announced the results in Bengaluru on Tuesday. 1,25,860 students have been awarded engineering seats, out of the 1,80,508 students who appeared for the examination. 96,642 students have received India System of Medicine and Homeopathy rankings. 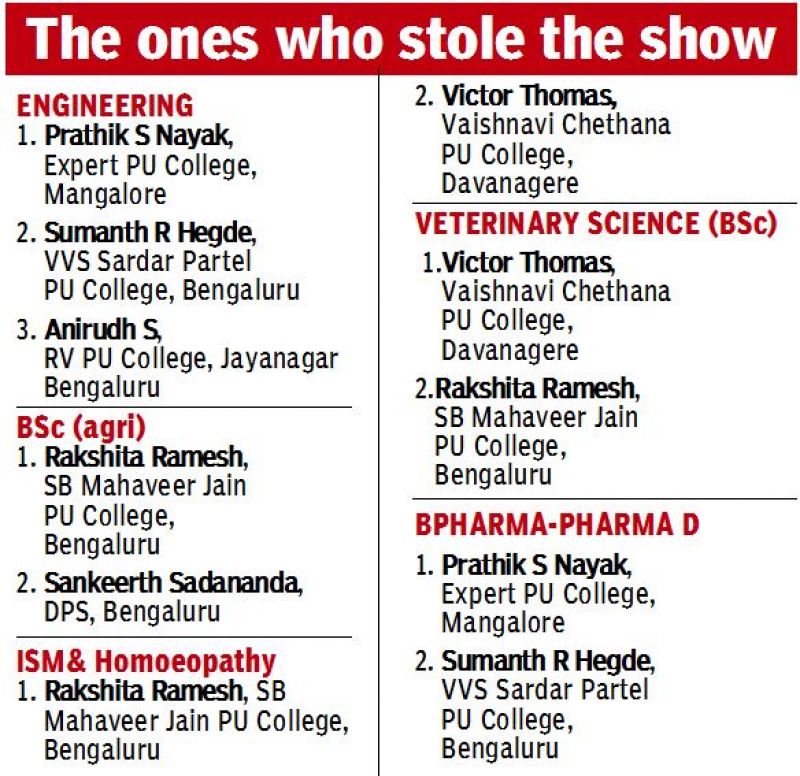 In order to avoid a clash in counselling dates between CET and NEET, the state government has moved the Supreme Court seeking permission to conduct "casual counselling rounds. "COMEDK has also been directed not to hold counselling until the end of the CET seat-allotment process," explained Mr Rayareddy.

Rakshita Ramesh, SB Mahaveer Jain PU College, Bengaluru
Rakshita Ramesh (above), the topper in the ISM and Homeopathy and BSc (agriculture) categories, is thrilled with her results, although the NEET is her first priority. "I want to study medicine at Bengaluru Medical College," said Ramesh, who says her interest in neurosurgery was sparked when her grandmother suffered a stroke and passed away. "Strokes are growing more common and I want to work in this field," she said. Ramesh would help her younger brother, who studied in Class 10, with his schoolwork before she began her own! "I concentrated mainly on NEET and KVPY," she said.

Anirudh S, RV Pu College, Bengaluru
Currently in Mumbai for the Chemistry Olympiad, Anirudh S, who received the third rank in the engineering category, is also waiting for his JEE (Advanced results). "Keeping my concepts clear, lots of practice and staying calm before and during the exams worked in my favour," he said. "Avoiding last minute study and my strong mental abilities were the formula for my success."

Prathika S. Nayak, Expert PU College, Mangaluru
"I am very happy and encouraged by my results," said Nayak, who bagged the top spot in the highly sought-after engineering category and also in BPharma and Pharma D. "This was team work," he joked, adding, "My friends, teachers and family have all been extremely supportive." The aspiring engineer, who wants to study Computer Science at an IIT is waiting for his JEE (Advance) results.

Doc verification
The process will begin on June 5, across 16 helpline centres. ‘A new centre has been set up at Koppal. CBSE / ISC students who have not yet submitted their marks card can also do so. If the result is withheld for want of second PUC or 12th standard marks card / proof of date of birth, the candidate concerned must submit at least a photocopy of the said document to the KEA office,’ explained Mr Rayareddy. Students can email their documents to keaauthority-ka@nic.in or submit them in person

KEA nodal agency:
KEA will work as the nodal agency for the allotment of Medical, Dental and govt quota architecture courses. Students can visit kea.kar.nic.in to enroll in the seat allotment process

VTU facing closure?
Higher Education Minister Basavaraja Rayareddy acknowledged the ongoing crisis in Visvesvaraya Technological University (VTU), assuring reporters that a solution would be found in the next few days. Speaking to the press after the CET results were announced, the minister said that problems surfaced following the installation of a new software. "Corrupt practices by past VCs has resulted in this. We are helpless and can only submit the report to the governor's office. The governor must act," he said. Income tax is a looming issue too, with the central government charging VTU `441crore in tax. "The University is facing closure because of this. It is one reason for the revision of the examination fee," he said. Mr Rayareddy added that another press meet will be held in this week to announce. "We will explain the action initiated to resolve this crisis," he said. On the charges of corruption by the Local Inquiry Committee members, he said he has sought a report on the issue at AMC College of Engineering.