Lucknow: Samajwadi Party (SP) chief Mulayam Singh Yadav on Friday issued a show-cause notice to his son for releasing a parallel list of candidates for the state elections.

A show-cause notice was also issued to leader Ram Gopal Yadav, for speaking against the party line in the media.

Mulayam Singh in the press conference declared that Ram Gopal Yadav had been expelled from the membership of the party for six years. 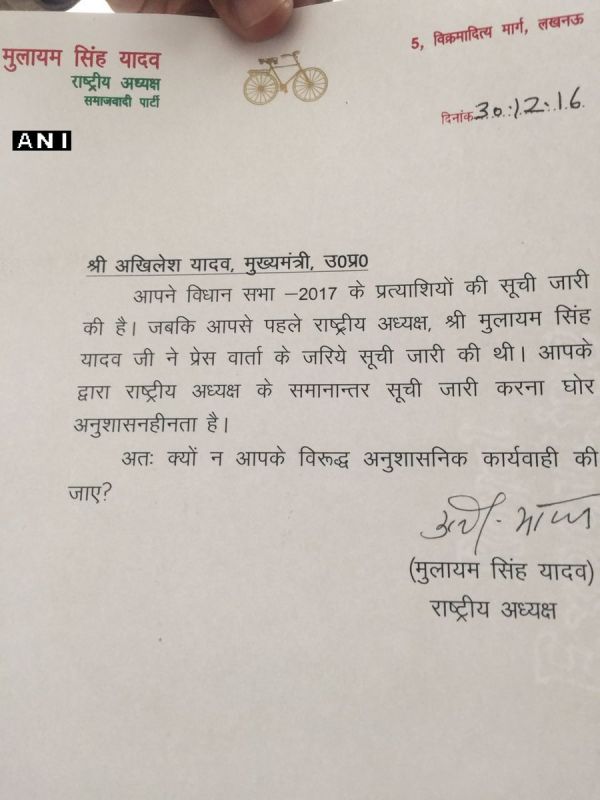 The crisis in the SP reached a flash point late last night after Akhilesh "circulated" his own list of 235 candidates for the Assembly elections, the schedule for which is likely to be announced any day now.

The list, which did not carry any signature, was made available on social media by defiant party MLAs who failed to get a ticket in the official list.

Mulayam Singh Yadav has called a meeting on Saturday of all the candidates allotted tickets amid hectic efforts to stave off a possible split in the ruling party in Uttar Pradesh.

"We have declared list of 325 candidates for the 2017 assembly polls; 78 seats still remain. Name of candidates for rest of the 78 seats will be announced soon," Mulayam said on Wednesday while announcing the list.

Akhilesh's name did not figure in the first list. Mulayam, however, said that his son, being the Chief Minister, can contest from any assembly seat he wishes to

Unhappy with the list released by his father Mulayam on Wednesday, the Chief Minister held a meeting on Thursday with his loyalists, including MLAs, who have been denied tickets. Afterwards, SP MLA Indal Singh said, "Akhilesh is likely to announce his own list of candidates."

These candidates were likely to contest on a separate symbol, other than SP's 'Cycle' symbol, paving the way for a wide split in the party grappling with dissensions and unprecedented feud at a time when the crucial polls were knocking at the door.