‘Will march naked to Parliament if demand not met’: TN farmers in Delhi

'We are only demanding MSP for us. Today, we expect that the government will announce the Right of Loans and profitable price to the farmers,' President of National South Indian River Interlinking Agriculturalists Association from Tamil Nadu, Ayyakannu said. (Photo: ANI)

New Delhi: Farmers from different corners of the country have started congregating at the Ramlila Maidan on the second day of the two-day protest demanding debt relief and better Minimum Support Price (MSP) for crops.

Over 1,000 farmers from Tamil Nadu have reached Delhi in the early hours of Friday carrying skulls of their colleagues who had committed suicide.

The group threatened to march naked if they are not allowed to go to Parliament today.

"We are only demanding Minimum Support Price for us. Today, we expect that the government will announce the Right of Loans and profitable price to the farmers. If they fail to do so, then we (farmers from Tamil Nadu) will march naked to the Parliament," President of National South Indian River Interlinking Agriculturalists Association from Tamil Nadu, Ayyakannu, told news agency ANI. 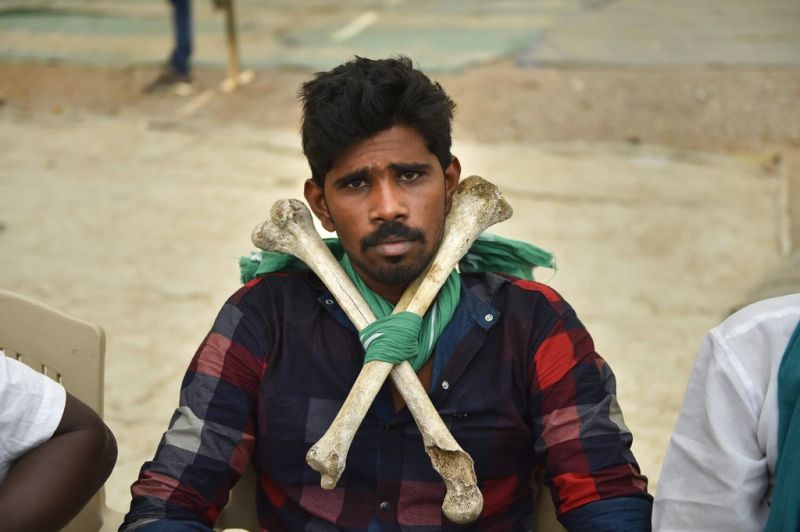 A farmer from Tamil Nadu arrives for a two-day rally to press for demands, including debt relief and remunerative prices for their produce, in New Delhi. (Photo: PTI)

The rally has been organised by the All India Kisan Sangharsh Coordination Committee (AIKSCC) for two days (November 29-30) against the ongoing rural distress. The committee claims to be an umbrella body of 207 organisations of farmers and agricultural workers.

During the past couple of months, the country has witnessed a number of protests by farmers.

On October 2, the birth anniversary of Mahatma Gandhi, farmers from the neighbouring states of Haryana and Punjab were not allowed to launch a protest in Delhi, which later led to a violent confrontation with the state police at the Delhi border.

Leopard dies after getting trapped in snare