The houses in Charminar and Moghalpura from where the IS suspects were arrested.

Hyderabad: In a citywide crackdown, National Investigation Agency officials with the help of the city police on Wednesday busted an ISIS terror module and took 11 suspects in custody.

Sources said that they were allegedly planning terror strikes in Hyderabad and other parts of the country either with bombs or by opening fire randomly at crowded places.

The prime targets for the ISIS module in the city have been identified as Inorbit Mall and the IT zone in Madhapur. In the several-hours-long raid, NIA officials seized target boards used for shooting practice, two pistols, an air gun, explosive substances (urea, acids and Hydrogen Peroxide) and other material used for making indigenous explosive devises (IEDs) besides Rs 15 lakh in cash which the arrested claimed was earned through trade.

ISIS may have sent cash via hawala channels: Cops
Though the arrested claimed that the cash, that was also seized along with other material, was earned through trade, investigators are suspecting that IS handlers might have sent it through hawala.

Read: Cyberabad cops beef up security in IT corridor

NIA has formally arrested five of the 11 suspects after booking them under sections of Unlawful Activities (Prevention) Act (UAPA), Explosive Substance Act, and IPC for waging war against India. 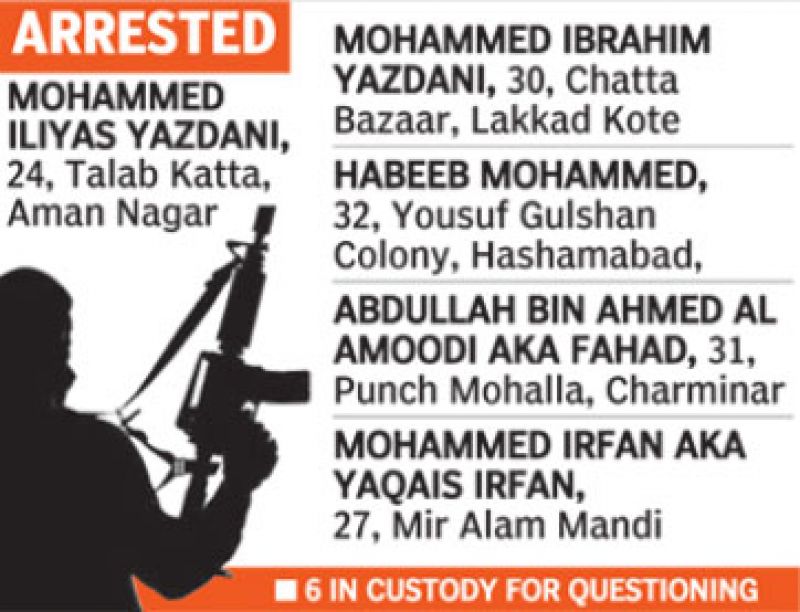 The suspects were apparently in touch with key ISIS recruiter Shafi Armar, a former Indian Mujahideen operative based in Syria, and took orders from him. They had allegedly practised shooting at Bandlaguda on the city’s outskirts and Narsapur in Medak district.

Among the arrested suspects, Mohammed Ibrahim Yazdani, Abdullah Bin Ahmed Al Amoodi aka Fahad, and Mohammed Ilyas Yazdani have been identified as the leaders. They had been in touch with Shafi Armar over the Internet.

Mohammed Ibrahim Yazdani, 30, an engineer from Chatta Bazaar, and his brother Mohammed Iliyas Yazdani, 24, from Aman Nagar, were family friends of Abdullah. The trio had started working together to attract other youngsters to IS.

Sources said that the explosives and arms were seized from the houses of the two brothers in Amannagar and Chatta Bazaar. Apart from these three, the NIA arrested  Mohammed Irfan aka Yaqus, 27, from Zahera Nagar, Mir Alam Mandi, and Habeeb Muhammmed, 32, from Yousuf Gulshan Colony, Hashamabad.

Read: Shafi Armar was presumed dead in US air strike

“The NIA conducted searches at 11 locations in Hyderabad since early Wednesday with the assistance of the Hyderabad Police. It had received information that some youth hailing from Hyderabad and their accomplices had entered into a criminal conspiracy to wage war against the Government of India by collecting weapons and explosive material to commit terrorist acts by targeting public places in various parts of the country,” said a senior official from Telangana state police.

Following Central and state intelligence inputs, at least 10 teams of NIA and city police cordoned off the areas of each suspect’s house and raided the premises.

“NIA has taken these suspects into custody for an inquiry. The material seized include firearms, ammunition, urea, acids, Hydrogen Peroxide and some other chemicals, electronic gadgets and other incriminating material,” said a senior official from TS police.

“It is reliably learnt that the said persons were working at the behest of the handlers of ISIS,” added the official. Investigators are verifying where the accused had procured the material from. The terror cell was planning to carry out pressure bomb attacks using vessels and explosive material, added sources.

Terror arrests from Hyderabad
11.09.2014:
Fifteen students including a girl from Hyderabad were arrested in West Bengal for allegedly trying to cross into Bangladesh to join the ISIS. They were counselled and freed as they did not have criminal history.

15.01.2015:
Salman Mohiuddin, 32, was arrested at the RGI Airport while he was about to board a flight to Dubai. He was planning to go to Syria via Turkey to join the ISIS. He met one Nicole Joseph alias Nikki Joseph alias Asfa Jabeen over FB and as per directions given by her, he decided to join the ISIS.

03.05.2015:
An MS student from US, Hafeez, hailing from Manchiriel, joined the ISIS in US and was killed in an encounter with Syrian Army.

11.09.2015:
Nicky Joseph alias Asfa Jabeen, 38, was from a Hyderabadi family and was married to a Hindu. She was in Dubai and was acting as an alleged recruiter for the IS. She was deported from Abu Dhabi and was caught at RGIA.

26.12.2015:
Three missing youths from Hyderabad, Faruqui Hussaini, Abdul Basit and Mohammad Hussain were arrested by the Maharashtra ATS. The three were found as the same people who tried to cross the border at Kolkata for joining the ISIS in 2014. Police detained them under the Unlawful Activities Act.