A flooded bus stop after heavy downpour in Mangaluru on Tuesday. (Photo: PTI)

Mangaluru: Several parts of coastal Karnataka bore the brunt of powerful tropical cyclone Mekunu on Tuesday. The storm resulted in massive flooding in Mangalur and Udupi. Strong winds uprooted trees and most of the light poles fell off their hinges in several towns and villages.

According to the weather office, coastal Karnataka is likely to receive more rain today.

As heavy rain lashed Mangaluru, 375 kilometres from Bengaluru, and water started stagnating on the streets and entering buildings, some schoolchildren were rushed home on boats escorted by disaster management volunteers. Shopkeepers downed their shutters amid the downpour. Many vehicles tried to wade through the water but were stuck. Drivers ultimately had to leave their cars and walk on. 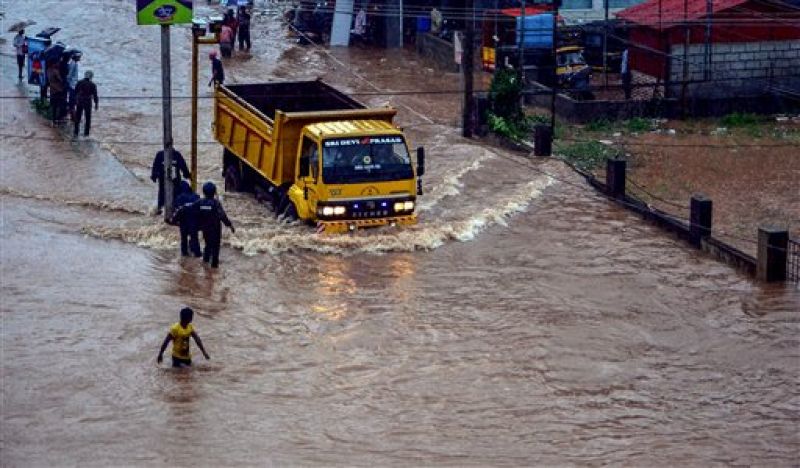 Rescuers at work in a flooded locality after a thunderstorm, in Mangaluru. (Photo: PTI)

The private water forecaster Skymet has predicted that cyclone Mekunu may hit Kerala in a day or two. It has already made landfall in southern Oman and Yemen, carrying winds reaching up to 185 kmph and killing seven people in Yemen.

On Tuesday, teams of the National Disaster Response Force (NDRF) fanned out across Mangaluru to help stranded people reach home safely. The home ministry has told the NDRF to be on standby for bigger relief operations and if needed, more teams will be sent to coastal Karnataka. 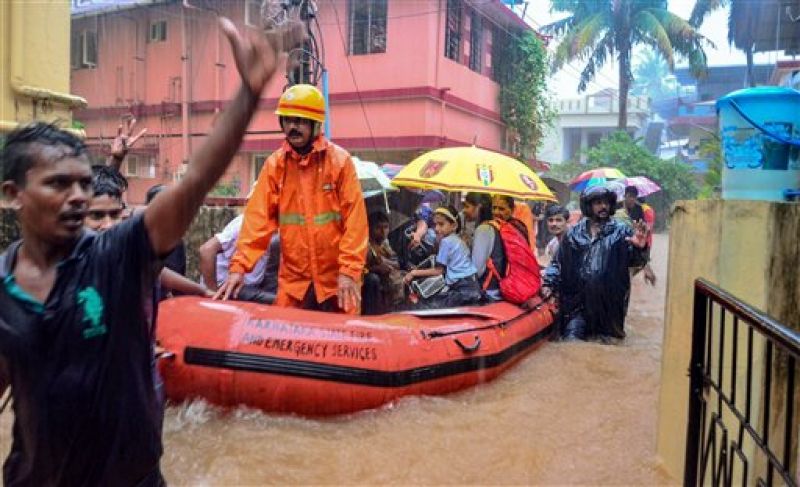 Rescuers shift people to a safer place from a flooded locality, after a thunderstorm, in Mangaluru. (Photo: PTI)

Schools and colleges will remain shut today in Dakshina Kannada and Udupi, the deputy commissioners of both districts have ordered. Students of a Mangaluru school who could not get out on time as the water level rose were taken away on boats by fire service personnel.

Prime Minister Narendra Modi, who is on a five-day three-nation tour of ASEAN members, after reaching Jakarta late on Tuesday evening tweeted that he has asked the authorities to ensure all possible help is provided to the affected areas in Karnataka.

I pray for the safety and wellbeing of all those affected by heavy rains in various parts of Karnataka. Have spoken to officials and asked them to ensure all possible assistance in the affected areas.

Water entered factories at Baikampady industrial area as well. Factory owners said such a situation had not been witnessed in the last few decades. Mangaluru and Bantwal taluks were the worst affected.

In Udupi, traffic was blocked after a banyan tree fell on the road at Udyavar. The strong winds also knocked down electric poles and hoardings. According to reports, around 130 buildings were damaged in Udupi district.

The heavy rain in the coast was due to well-marked low pressure over the south-east Arabian Sea, off the coast of Karnataka and north Kerala, and also due to the onset of monsoon in Kerala, the weather office has said.

He directed the Deputy Commissioner to take assistance from the Coast Guard to rescue people, if such situation arises. The Chief Minister also instructed him to take necessary precautionary steps to mitigate severe damages and prevent loss of lives, said a press release from CMO.