Vijayawada: Slogans of “Go back Naidu, Chandrababu go back, and “down down Naidu,” rang through Undavalli in Amaravati on Thursday even as stones and footwear were hurled at the TD president and former chief minister’s convoy, which was passing through the area.

Police had a tough time in ensuring that the convoy passed through the road blocked by farmers of Rayapudi, Tullur, Uddandarayunipalem, Penumaka, Undavalli and other areas of Amaravati. The former chief minister and other TD leaders were on their way to Amaravati and had taken prior permission to visit the area.

The angry farmers alleged that Telugu Desam leaders had grabbed their assigned lands for meager prices and then went on the sell the same at high prices under the land pooling scheme for establishment of the capital at Amaravati. 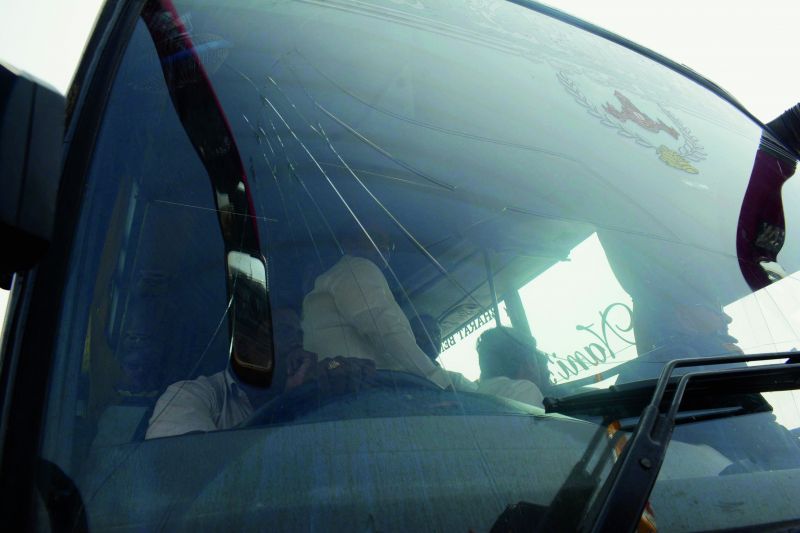 The windscreen of the bus in which TD president N. Chandrababu Naidu was travelling suffers a crack after it was pelted with stones. (Photo: DC)

Farmers erected black flexies and banners. They also carried placards and gathered in large numbers near the Seed Access Road at Undavalli, contending that Naidu had no right to tour Amaravati. As the convoy neared, the farmers tried to barge into the convoy and prevent it from moving forward.

Police resorted to lathi charge at places to ensure that the convoy passed through.

Angry farmers, including Dalits, charged that while Mr Naidu offered a good package to patta lands, he showed scant regard to Dalit farmers and offered them a meagre package under GO 41 to seize their assigned lands.

They claimed that the erstwhile TD government promised to provide free education, interest-free bank loans, jobs, free medical treatment, and developed commercial/residential plots in lieu of their assigned lands. But none of the promises were fulfilled.

At one stage, TD supporters accompanying the convoy almost came to blows with farmers. But the police lathi charged and ensured that the convoy got through the area. Another group of farmers tried to stop Naidu’s convoy at Tullur but police foiled their attempt too.