Adi Festivities: A mix of the ecstatic, bizarre rituals in Tamil land

CHENNAI: The Tamil month of Aadi- the fourth in the annual Tamil calendar and usually coinciding with mid-July to mid-August in the Gregorian calendar- is soaked in festivities beginning with the ‘Dakshinyana Punyakalam’, or astrologically known as the ‘southward’ movement of the Sun.

Strangely, the month of Aadi is strictly not considered auspicious for major events in people’s lives like conducting a wedding in the family or shifting to a new home and so on, but comes alive through a range of festivals, ritualistically associated with temples to various deities. 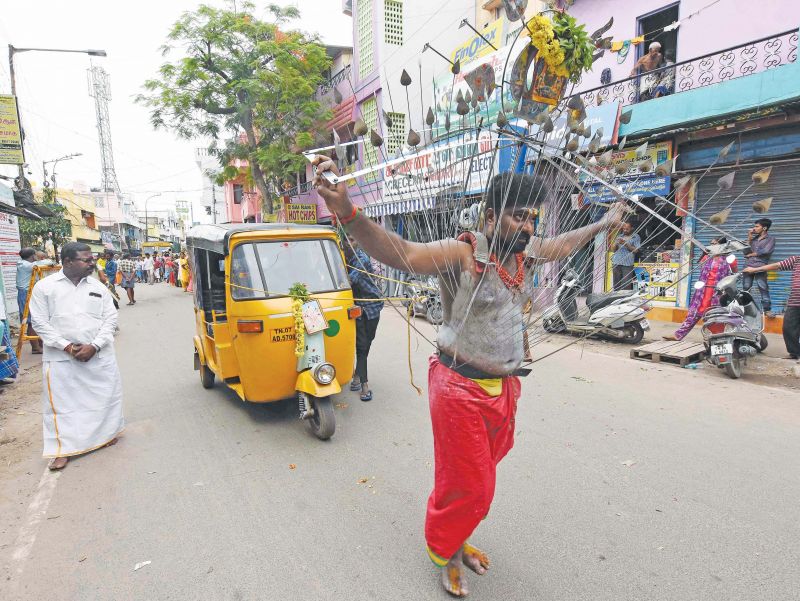 A body pierced devotee in Thulukanathamman temple in Triplicane pulls an auto as part of Aadi festivities. (Photo: DC)

These are notably Amman, Murugan and Vishnu temples in Tamil Nadu, as people seek to appease their deities with acts of self-denials in the hope that the Gods would grant them their mundane wishes. While the ‘Aadi Ammavaasya’ is considered very important in thanking one’s forefathers, the elaborate festivals like on the four Fridays of the Aadi month in Amman temples, the Aadi Kirthigai in Murugan temples (Lord of the Hills in Tamil religious yore) and the ‘Aadi Pooram’ as the Goddess Andal shrine in Srivilliputhur in south Tamil Nadu are important.

Again ‘Aadi Perukku’- the 18th day in this Tamil month is celebrated with a lot of enthusiasm by women along the banks of the river Cauvery, not only to honour the Mother Nature, but also in the hope that the new cropping season would yield a bountiful harvest by the month of ‘Thai (mid-Jan-mid Feb)’.

Apart from performing special ‘poojas’, preparation of sweet rice and so on, the rituals by devotees manifest a whole range of self-inflictions, from the ecstatic to the bizarre.

Carrying of milk pots by women to ‘Amman’ temples is a very common sight in villages, towns and cities of Tamil Nadu and at some stage, one of them goes into a trance and dances on the middle of the road even, saying she is ‘possessed’ by the deity and doling out curative prescriptions to people with illnesses or how to go about fulfilling long-unfulfilled wishes.

There is the practice of fire-walking, on hot coal beds which draws thousands of devotees to ‘Amman’ temples, or circumambulating the shrines carrying hot mud pots with burning coal. 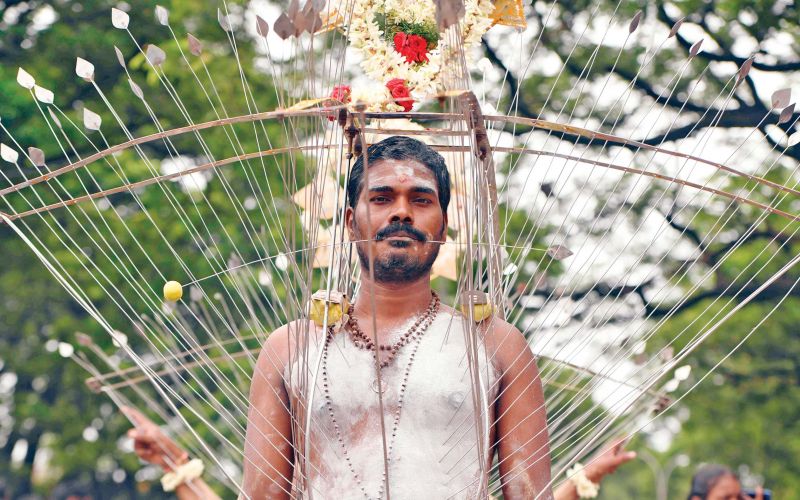 A devotee with his body pierced with metal rods performs a ritual during “Aadi” celebrations in Chennai on Sunday. (Photo: AFP)

Bordering on the bizarre in both ‘Amman’ and ‘Murugan’ temples is the different kinds of ‘body piercing’ done by devotees, in a voluntary infliction of pain.

With hooks and skewers piercing their backs, some pull auto-rickshaws to the temple, while many others in taking ‘Kavadis’ uphill to Murugan temples carry small or large ‘Kavadis’ (a semi-circular arch with supports on either side) with sharp ends of the metal frames piercing their skins.  The idea is self-mortification to appease the Gods and Goddesses without shedding blood. And ‘Aadi’ is full of such rituals.

AIADMK ministers signal a shift away from BJP

No role for third party: MEA after Trump offers to mediate on Kashmir