Hyderabad: While Chief Minister K. Chandrasekhar Rao will take a call on the fate of Eamcet-2 on Friday, official sources revealed that a decision to cancel Eamcet-2 has already been taken following the CID confirming the question paper leak.

The Chief Minister has called a meeting with the education ministers and officials at his camp office on Friday. The CID’s investigation report on the paper leak is expected to be submitted to the government on Friday morning at the location. The report will be discussed in the meeting and the CM will take a decision on cancelling Eamcet and ordering a re-exam.

Special chief secretary of Higher Education, Mr Ranjeev R. Acharya, and principal secretary of Medical and Health, Mr Rajeshwar Tiwari, have been asked to attend the meeting with all the details on the implications of holding the Eamcet again. 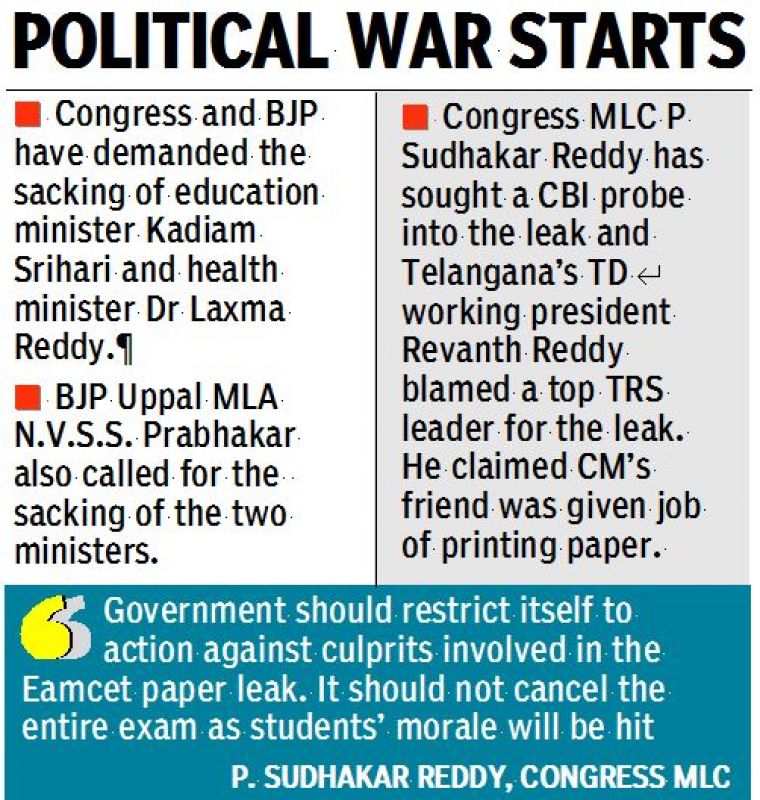 The TS Council of Higher Education and JNTU-Hyderabad, which conduct Eamcet, have apparently readied an exhaustive report to be submitted to the government on the timetable for holding Eamcet-3 and for completion of medical admission counselling within the MCI stipulated deadlines as mandated by the Supreme Court.

TSCHE chairman Mr T. Papi Reddy and newly-appointed JNTU-H V-C Prof. A. Venugopal Reddy will brief the roadmap for conducting Eamet-3. As per the MCI schedule, the first round of counselling should end by June 25, second round by July 27 and third round by September 10. The cut-off date for MBBS admissions is September 17.

Classes should commence from September 1. The due date up to which students can be admitted against vacancies arising is September 30. In this backdrop, the government is left with less than 50 days to conduct the exam, release results and complete the admission process.

Officials have devised the Eamcet-3 schedule to meet the September 10 deadline. If need be, the government is exploring the possibility of seeking a few days’ extension as a special case owing to the paper leak. Meanwhile, it has been revealed that some affected students and their parents are now planning to move the High Court if the government cancels Eamcet-2 and orders a re-exam.

Srihari tells students to relax
Parents and students met Deputy Chief Minister and Education Minister, Kadiam Srihari here on Thursday to discuss future course of action in the wake of the alleged Eamcet leak. Students said they were under severe stress after appearing for two Eamcet exams and were not ready for another.

Students said it was not fair to punish all for the crimes of a few. “Only those identified by the CID must be disqualified and the rest should be allowed to appear for counseling and the rest of the admission process. It is not correct if the government decides to disqualify all the students,” said P. Sreeja, a student from Hanamkonda.

■Give us justice not Eamcet-3, say rankers
■Eamcet papers were leaked, confirms CID