Bengaluru: As heavy rains continued to lash several parts of India, one city was witness to a strange sight - people were seen trying to catch fish with fishing nets on Bengaluru's Ring road.

Water from some of city's lakes flooded streets of the IT-hub and locals were captured fishing on the roads with a huge orange net. A Twitter user posted a picture of the 'unbelievable' sight on the micro-blogging site.

Read: Heavy rain throws life out of gear in Bengaluru 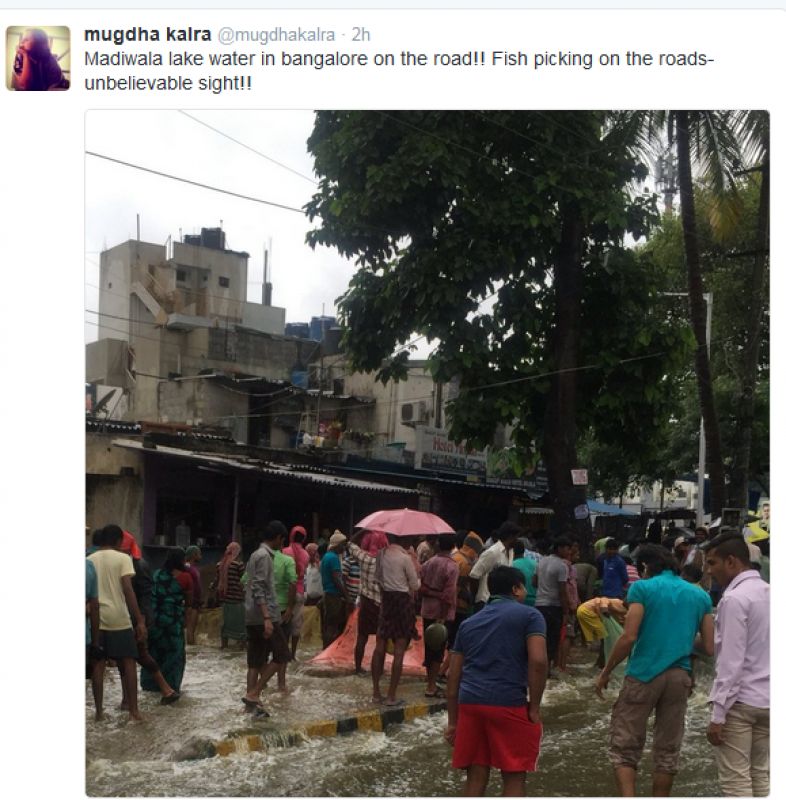 Silk board today, seems like people are actually fishing, 🙄🙄😂😂 Picture and update by @mayurchannagere #bangalore pic.twitter.com/7smgj0ruVR

Heavy-water logging due to the incessant rains led to major traffic jams across the city. Several main roads like the Hosur Main Road, NICE roads junction were flooded due to Thursday's showers.

Dear Gurgaon, Bangalore is also joining you in the quest to become Venice. pic.twitter.com/LiMHVh7pCx

The scenes were compared to Gurgaon, which is also experiencing a similar plight, with crippling road jams that have brought life to a grinding halt for many.

The Delhi-Gurgaon expressway was completely choked and the city Police Commissioner Navdeep Virk had to step out on the streets to take stock of the situation.

Watch: Locals catching fish on the streets of Bengaluru

#WATCH: Locals catch fish on streets as lake overflows in Bengaluru (Karnataka) due to incessant rainshttps://t.co/8TaFhE0Cyb

■Heavy rain throws life out of gear in Bengaluru
■Rains drown Bengaluru, Gurgaon as people struggle to go about their lives