Cry in the wilderness

THIRUVANANTHAPURAM: The ‘Women in Cinema Collective’ has put up a protest tent on the narrow footpath outside the perimeter wall of the imposing structure of the Government Secretariat with its colonial facade. It has been a year since the WCC has pitched its tent but there is no clear sign yet that the powers that be have taken note of its presence. That says more about the male attitudes in society, and not only in the Malayalam film industry.  But the glimmer of hope for the protest which observed its first anniversary today, is the encouragement from many to bash on regardless.

What is significant is that in half the time of the WCC’s existence, women in western cinema, suppressed for long by unimaginably bestial men, had unleashed a storm that has at least symbolically crushed male brutality. The WCC was formed in February, in response to the shockingly brutal attack on a female actor. The Harvey Weinstein scandal broke out later, in October. The powerful producer’s outrageous behaviour that could put even a medieval brute to shame provoked the ‘Me Too’ campaign that swept the world, emboldening women to chuck their fears and point fingers. Innumerable reputations – of even iconic stars, writers, executives – became mud in this torrent of outpouring. And, finally, on May 25, Weinstein was arrested.

The Malayalam film industry has remained shockingly immune. In fact, it witnessed a reverse outpouring. The powerful unions in the film industry, after lying low initially, came out aggressively in support of the star accused of masterminding the attack on the female actor. The WCC put up a spirited fight. The ‘Avalkoppam’ campaign was proof that the new girls of the industry were not willing to go down without a fight. The WCC but spoke in generalities; the fists were raised but fingers were not pointed. Forget shaming a big name, the WCC’s presence has not yet pressured film producers to ensure even basic amenities for women working in the industry. “It is business as usual. Women, especially those working lower down in the hierarchy, continue to be deprived of toilets or proper changing rooms at shooting locations,” said filmmaker Dr Biju.

He also doubts whether producers are concerned about security at locations, an indifference towards which had caused the attack on the female actor in February. However, filmmaker and Chalachithra Academy chairman Kamal said that the February assault had forced producers to put in place a monitoring system at shooting sites. “Earlier, it was a free for all. Now certain restrictions have been imposed on the entry of people inside the shooting area,” Mr Kamal said. “It has to be conceded that the formation of the WCC has infused in the industry a kind of alertness,” he added. 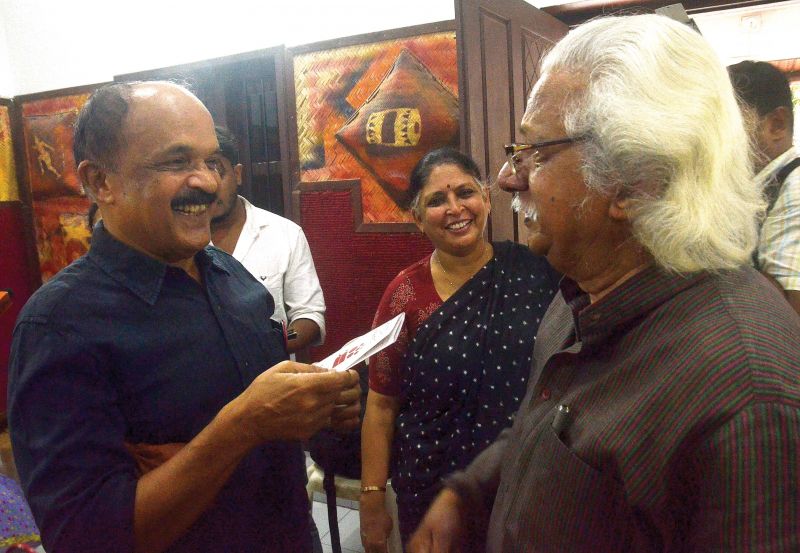 Writer Zacharia, Beena Paul and Adoor Gopalakrishnan during an interaction programme by Women in Cinema collective in Thiruvananthapuram on Monday. (Photo: DC)

However, the WCC’s major demand of ‘equal pay’ has been met with scepticism. “There is income disparity even among women,” said Kamal. “I am not sure whether Vidhu Vincent can command the pay that a star filmmaker like Anjali Menon gets,” he added. Vidhu Vincent said the WCC’s demand was based on ‘screen presence’. “Actors who have the same screen space in a film should have equal pay,” she said. “Parvathy had more screen time than all the three main leads in Take Off (Fahadh Fazil, Kunchacko Boban, and Asif Ali) but took home a package that was lower than all the three,” she said. Kamal said that salaries were determined by the market. “A Sobhana or Manju Warrier will be paid higher for a dance performance than even a more skilled dancer,” he said.

The WCC seems to be so marginalised that even their successes are sought to be snatched from them. The Justice Hema Commission, which was set up to study the conditions of the women in the industry on the basis of a demand made by the WCC, is in a limbo. The Commission has not started functioning even after eight months of its constitution. A month ago, the WCC had complained to the Chief Minister. They were assured that the Commission was right on track. The Chalachithra Acadcemy chairman, however, warned the WCC members on their first anniversary get-together on Monday that the Commission was still more interested in improving its material conditions than anything else.

Strangely, the WCC has not engineered a single subversive event either, say a film with an all-women crew or an all-women cast like the all-black  ‘Black Panther’. They have not even managed to force AMMA, the powerful actor's body, to have a female wing. As the Collective turns one, the best advice that even earnest well wishers offer is “hang on”. “Hold on, persist. Your voice will one day be heard,” said writer Paul Zachariah. Feminist thinker Dr J Devika said: “To continue to be a presence should be your priority.”