Amid controversy surrounding NEET, the CET results were announcd on Saturday.

Bengaluru: The Karnataka Examination Authority finally announced the Common Entrance Test 2016 results for admissions to various professional courses. Bengaluru and Mangaluru students excelled by bagging most of the ranks. 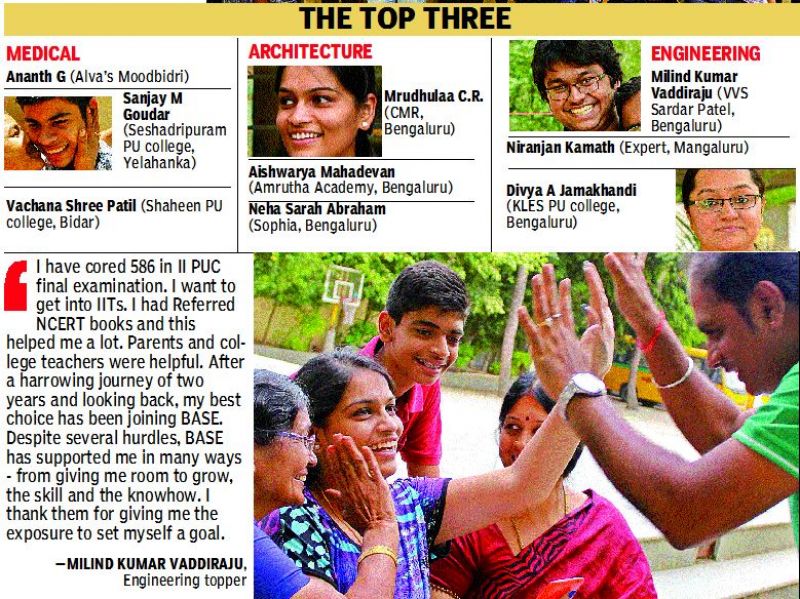 Will meet pvt college representatives: Minister
After releasing the CET rankings 2016 Medical Education Minister Dr Sharan Prakash Patil told reporters that he will soon hold meeting with the representatives of the private medical colleges affiliated to COMEDK. On Friday, private medical colleges association announced that it will not share any seats with state government.

Till last year they were sharing 40 per cent of their total seats with state government. “Seat allotment process will begin only by July 1. So, students and parents need not worry,” he said. He also ensured that extra fee problem will be solved this year.

CBSE: 4,100 get perfect 10 in city
More than 4,100 students from the city have scored perfect 10 CGPA in the CBSE class X board examination results of which was announced at 2 pm on Saturday. According to the data, like previous years pass percentage among girl students was higher than boys.

According to CBSE officials, Karnataka state has shared second place along with Andhra Pradesh in the overall pass percentage in Chennai region with a whooping pass percentage of 99.84 per cent. Puducherry topped the chart with 99.92 per cent.

Toppers and their mantra

I just put in a lot of hard work. The thing about GPA system is that students have to keep working throughout the year. If one gets a good score in one test, he or she might not do well in another. So consistency is very important in GPA system. I did fairly well in all my tests and especially semester exams that have a considerably good share in the final score that we get. I had difficulty in Maths and I gave more importance to that subject. During my free time, I listen to music and also play guitar. I am also into theatre and get my training from a studio. My parents are very supportive.
—Keshab Roy Choudhury National Public School, Indiranagar

I studied throughout the year and maintained consistency and the results are also encouraging. I play chess during my free time and my other hobby is painting. I felt Maths to be difficult compared to other subjects.
—M Sharath Kendriya Vidyalaya, Hebbal

I am extremely happy that I got a 10 CGPA. I studied regularly and also involved in other activities such as playing tennis and piano. The teachers were quite helpful. I was also involved in lot of activities at school like dramatics, quizzes and in charge of our class assembly.
—Prithika Ramaiyer, National Public School Koramangala

It is just hard work. I paid attention to regular classes at school and also tried to solve and answer all the online papers. I was solving two online papers a day. It was very much helpful. I scored well also because I never kept reading the same textbooks again and again. I only referred to the books to correct my faults. My hobbies are reading books and writing.
—Surabhi Jain, NPS, Koramangala