The garbage dumpyard where garbage waste is behind dumped and burnt despite security personnel being present. After a series of protests by residents of Bachupally and adjoining areas to shift the open garbage dumpyard out of the gram panchayat, the collector has reassigned this land for colleges, schools and low-income housing. (Photo: DC)

Hyderabad: There is no relief to the residents of Bachupally even after the Telangana Pollution Control Board (TSPCB) served show cause notices on the three gram panchayats— Bachupally, Pragathinagar and Nizampet, questioning their inaction. The gram panchayats, it is learnt, had asked for time till March 31 to shift the dumpyards to Jawaharnagar.

The gram panchayats have not taken any action on the shifting though the deadline was crossed 26 days ago. Residents allege that they are suffering from health problems due to the noxious fumes from untreated garbage. The open burning of municipal waste is causing serious health problems for residents.

They demand immediate action to stop garbage dumping and burning of waste. If no action is taken within two weeks, the residents would seek legal action. After a series of protests by residents of Bachupally and adjoining areas for shifting the open garbage dumpyard out of Bachupally gram panchayat, the collector reassigned this land for colleges, schools and low-income housing. 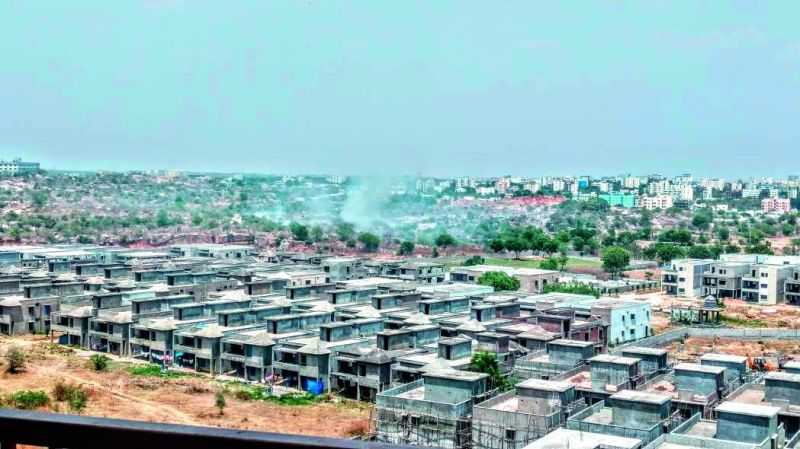 Toxic fumes from the garbage dumpyard blows across residential colonies located near it.

Nanda Kishore, a resident of Bachupally, said, “The deadline for stopping the burning of garbage was March 31, 2017. We will wait for a few more days and then go to court.’’

Veeresh Kasani a resident of Bachupally and an active member who protested against the dumpyard, said, “We have again asked the authorities to clear the dumps. Then they kept security personnel to avoid dumping, but still garbage is being dumped at night. A permanent solution is that we need to dump the waste at Jawaharnagar dump yard at Shamirpet.’’

He adds, “The immediate need is to stop the dump and the burning of waste. Local authorities have kept a fire engine at the site but still it’s not under control. So let’s give some more time, but if they don’t stop even after two weeks, then we will approach court.’’

A senior official from TSPCB said, “We have issued show cause notices to the gram panchayats, after which they asked time till March 31, but it may take some more time as it’s a huge dumpyard and they need a lot of planning to shift tonnes of garbage to the Jawaharnagar dumpyard.’’