Students of state PU colleges, who have applied for CET, are worried they will not be able to appear for the NEET .

With the schedule proposed by the Union government and Medical Council of India (MCI) meeting the court’s approval,  the NEET will be held in two phases, on May 1 and 2 and July 24 . The results will be out on August 17. The state government is expected to hold a series of meetings with all the stakeholders on preparing  students for the testt.

"It is a challenge to prepare state students for NEET in such a short time. But as the PU department  follows the NCERT science syllabus, appearing for the test should  not be a problem for them,"  said  an officer from the state medical education department.

Karnataka Examination Authority (KEA) executive director, DS Ramesh  said  students who have not applied for the AIPMT scheduled on May 1 , did not have to worry as they could apply for  NEET phase 2 , on July 24.

Dr. S.S. Harsoor, director, state medical education department, meanwhile, said it  would hold a meeting of all the stakeholders to take decisions on various issues related to NEET. 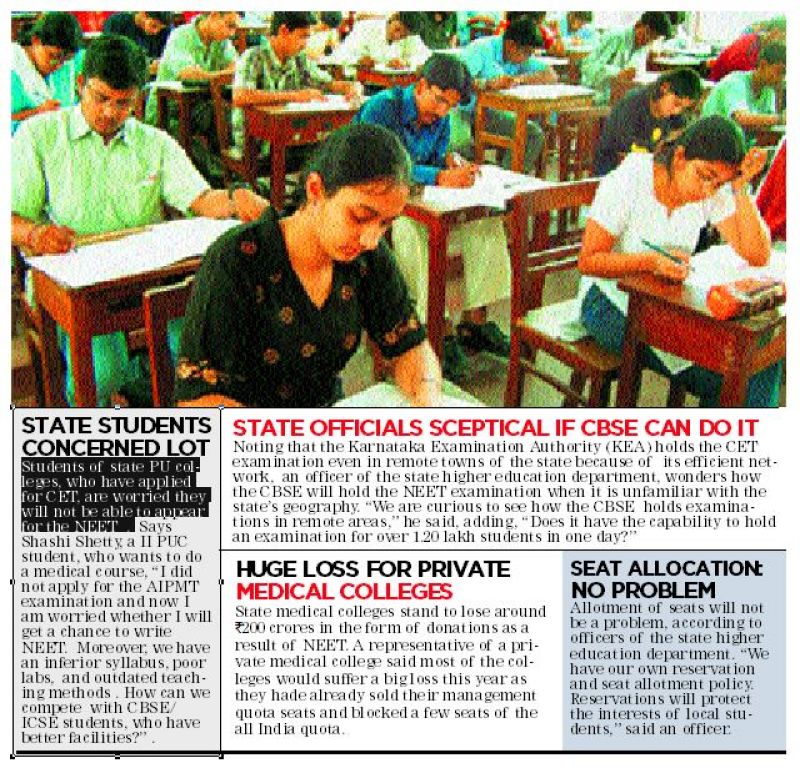 Guest Column: I’m all for it, it will give us better docs, says Dr Prabhudev

It is a welcome move. Going by the Planning Commission of India, the country needs over six lakh doctors every year. But we are producing just 40,000 and even among them few go to rural areas.

The current medical admission process, especially in  private colleges, is suspect for several reasons. Admissions in private medical colleges are riddled with seat blocking and other malpractices.

The quality of doctors produced changes from college to college based on their admission criteria like donations and tests. Most of these doctors know very little. I am sorry to say that MCI failed to look into these issues until now. The NEET is expected to bring radical changes in the system and put an end to all these problems.

In my opinion, NEET should have been introduced a few years ago when Mr. Kapil Sibal was the Union HRD minister. But it wasn't for several reasons. Now the Supreme Court judgement could boost the health sector of the country.

Jammu and Kashmir and Ladakh ahead of Republic Day

Maharashtra schools reopen, govt hopes students will enjoy being back to classrooms