A range of services are going to cost the general public more than before. (Representational Image)

New Delhi: Finance Minister Arun Jaitley presented his third budget on Monday in the Lok Sabha which largely focussed on the rural economy and is being hailed by many as pro-poor. But he also made some announcements that would have a direct impact on the pockets of middle-class families, both in positive and negative ways. Following are ten proposals made by the Government that you need to know about:

1. No change in personal Income Tax slabs: The Finance Minister did not announce any hike in personal income tax, on the contrary, those earning below Rs 5 lakh per annum will be given a relief of 3000 rs. This will benefit at least 2 crore-tax payers across the country.

2.  First time home buyers to benefit: Those looking to buy a house for the first time can now avail an additional deduction of Rs 50000 for properties that cost upto Rs 50 lakh.

3.  Health care for all: Jaitley announced that a new health care scheme would be rolled out that will provide a health cover of 1 lakh rupees to each family in the country. Senior citizens will be given an additional cover of 30000 rs to save them from financial stress during medical emergencies.

4.  Flight and rail ticket prices to go up: With a 0.5% additional cess imposed on all services, flight and railway tickets will cost the general public more than before.

Read: Budget 2016: Cars to become costly as infra cess of up to 4 per cent proposed

5.  Cars set to be expensive: Car prices, including those of mass market small ones, are set to go up as Finance Minister. Arun Jaitley proposed to levy an infrastructure cess of up to 4 per cent on various kinds of vehicles. He proposed a cess of 1 per cent on small petrol, LPG and CNG cars, 2.5 per cent on diesel cars of certain capacity and 4 per cent on other high-powered vehicles and SUVs.

6. Cheer for small businessmen: The government proposed to increase the turnover limit under presumptive taxation scheme under 44 AD of the Income Tax Act to Rs 2 crore from existing limit of Rs 1 crore, which will benefit more than 30 lakh small business people.

7.  Boost for SC/ST, women entrepreneurs: The government has allocated Rs 500 crore to promote entrepreneurship among ST/SCs and women. At least 2.5 lakh entrepreneurs will gain under this scheme.

8.  Smoking to pinch your pocket further: Cigarette prices are set to soar as a 10-15 percent hike in excise duty on Tobacco was proposed by the Finance Minister. However, the prices of bidis will not be affected.

9.  Gold and jewellery to be dearer: It also seeks to impose an excise duty of 1 per cent without input tax credit or 12 per cent with input tax credit, on articles of jewellery excluding silver other than studded with diamond or some other precious stone with a higher exemption and eligibility limit of Rs 6 crore and Rs 12 crore respectively.

10.  Eating out and movies to cost more: You will have to shell out more money from June for dining-out as restaurants will also be affected by the additional cess imposed on paid services. Other things that will cost you more are: watching movies in halls, buying ready-made clothes and mobile bills. 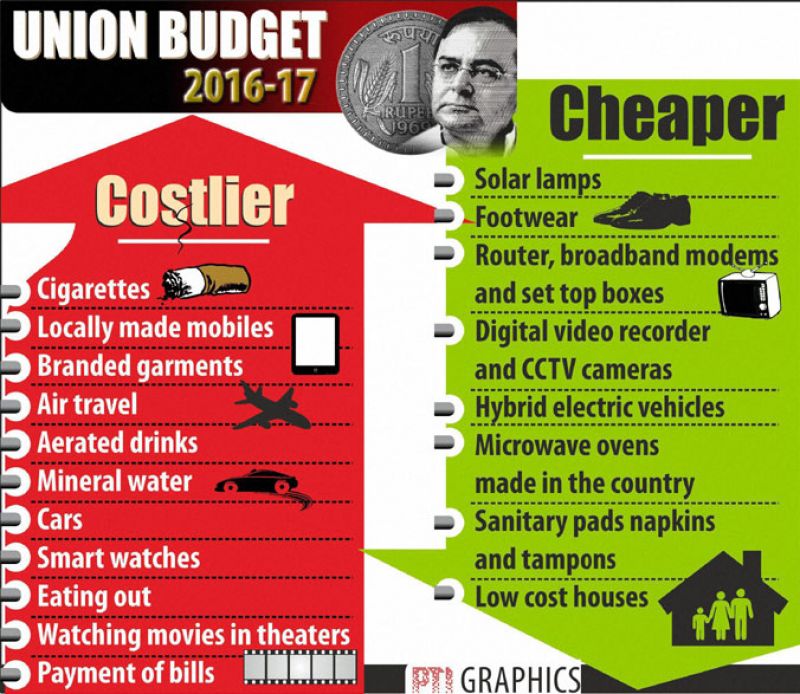 And here is what you pay or not pay: