Top LeT commander Naveed Jutt alias Abu Hanzalla is reported to be among two militants killed in a gunfight with security forces in J&K's central district of Budgam on Wednesday. (Photo: File | PTI)

Srinagar: Top Lashkar-e-Tayyaba (LeT) commander Naveed Jutt alias Abu Hanzalla was with another militant killed in a gunfight with security forces in Jammu and Kashmir’s central district of Budgam on Wednesday.

Three security personnel were injured during the clash, the officials said.

The police said that Jutt was a member of the same group of LeT cadres which also included the 26/11 terror attack convict Ajmal Kasab.

He was involved in a series of attacks on security forces and civilian atrocities including the murder of journalist Shujaat Bukhari, it said.

Jutt was a Pakistani national from Sahiwal (Multan). He had on February 6, 2018 escaped after killing two J&K policemen who were escorting him to a hospital in Srinagar for medical check-up from a City prison and was since known to be active mainly in south Kashmir.

He had been arrested by the Army from Kulgam district of south Kashmir earlier in June 2014 and had been lodged in Srinagar’s high security central prison.

In a statement, the J&K police said that Jutt was part of the same LeT group which also included Mumbai terror attack convict Ajmal Amir Kasab who was hanged to death in Pune's Yerawada Central Jail in November 2012 and that both had received arms training at a madrassa in Pakistan.

Jutt along with his associates sneaked into J&K in October 2012 and “had a long history of terror crime records since.”

The police also said that since Jutt was a Pakistani national, it will follow the procedure so that the concerned authorities in New Delhi take up the matter with Islamabad for handing over his body to the neighbouring country.

The police had in June this year alleged that Jutt was part of an LeT group which killed journalist and ‘Rising Kashmir’ editor Syed Shujaat Bukhari earlier that month.

50-year-old Bukhari was gunned down along with two police guards outside his office in Srinagar’s Mushtaq Press Enclave on June 14 evening.

Two weeks later, J&K police had claimed that the conspiracy to kill him was hatched by LeT militants based in Pakistan and executed by its three cadres including two locals and Pakistani national Jutt in Srinagar.

Inspector General of Police (Kashmir range) S.P. Pani told the media that before targeting Bukhari, a “malicious” campaign was spearheaded against him by the LeT through social media from the neighbouring country.

He had also said that among the conspirators was Sheikh Sajjad Gul, a resident of Srinagar’s Zainakote area, who is now based in Pakistan and that the crime was executed by LeT operatives Azad Ahmed Malik alias Dada alias Zaid, Muzaffar Ahmed Bhat and Muhammad Naveed Jutt alias Abu Hanzalla.

Azad Malik, a resident of Arwani area of Anantnag, was among six militants killed on November 23 in a fierce gunfight with security forces the district’s Bijbehara belt.

The police had constituted a Special Police Investigation Team (SIT) under Deputy Inspector General of Police (Central Kashmir) V K Virdhi to probe the gruesome murder of Bukhari. But it has, so far, not been able to file chargesheet against the accused in the court.

The LeT had strongly denied its involvement in the journalist’s killing and in its counter charge blamed Indian intelligence agencies.

The killing of Jutt and another militant sparked off protests and clashes between stone-throwing youth and security forces at Kuthipora of Budgam, leaving eleven persons including two CRPF jawans injured, reports said.

Later on Wednesday, a short video appeared on social media showing a militant with an assault rifle emerging out of the debris of a private house destroyed in the fire fight unharmed.

The purported video, which has gone viral since, also shows a bearded man who is wearing a black colour pheran (traditional Kashmiri cloak) being helped by a group of youth to come out of the rubble.

He can also be seen being quickly escorted to some unknown place by these youth. 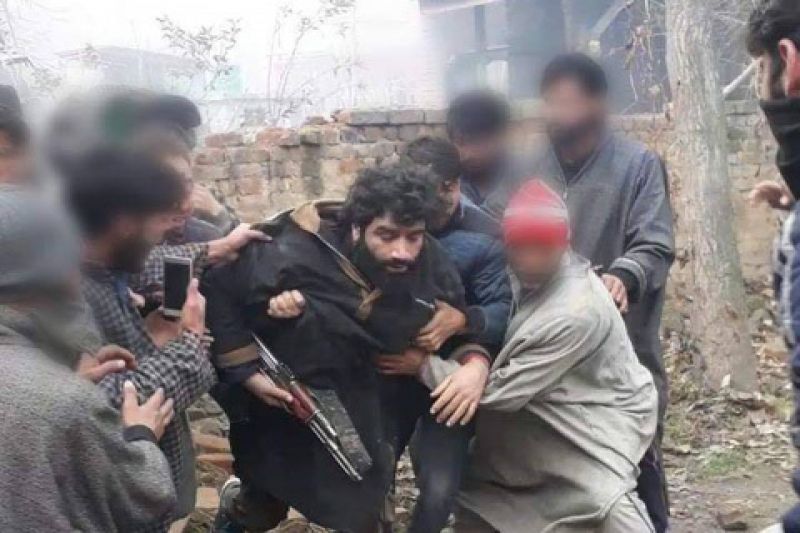 A screengrab from the purported video. (Photo: Greater Kashmir)