Ivanka Trump will deliver the keynote address at the inaugural session, along with Prime Minister Narendra Modi. (Photo: Twitter | @USAmbIndia)

Hyderabad: Ivanka Trump, the daughter of US President Donald Trump and his advisor, arrived in Hyderabad on Tuesday for the Global Entrepreneurship Summit (GES) co-hosted by India and the US.

Ivanka and her team landed at the Shamshabad (Hyderabad) Airport around 3.15 am.

After reaching Hyderabad, Ivanka Trump thanked people for the warm welcome and said she was excited to be in the city for the GES.

Ivanka Trump was invited for the summit earlier in 2017 by Prime Minister Modi during his visit to the US.

Ivanka Trump and Prime Minister Narendra Modi on Tuesday evening addressed the annual summit being held for the first time in South Asia. PM Modi arrived in Hyderabad a little after 1 pm. First on his agenda on Tuesday was the inauguration of the Hyderabad metro rail service.

Addressed party cadres at the airport, Modi said: “Today, the attention of the world is on Hyderabad. This city is hosting a prestigious international summit where industry leaders from the world are joining.”

He added on a political note: “In the southern part of the country, the BJP has not got many opportunities to serve in government. Yet, our karyakartas are always working on the ground with the people. We are proud of the family of BJP karyakartas.”

“We believe in cooperative federalism. There is no question of discriminating against states where we are not in power. We are committed for the overall development of our country,” Modi said.

Though Ivanka has been to India before, this time she is in the country as US President Donald Trump's advisor. The visit is also her maiden solo outing on the international stage. 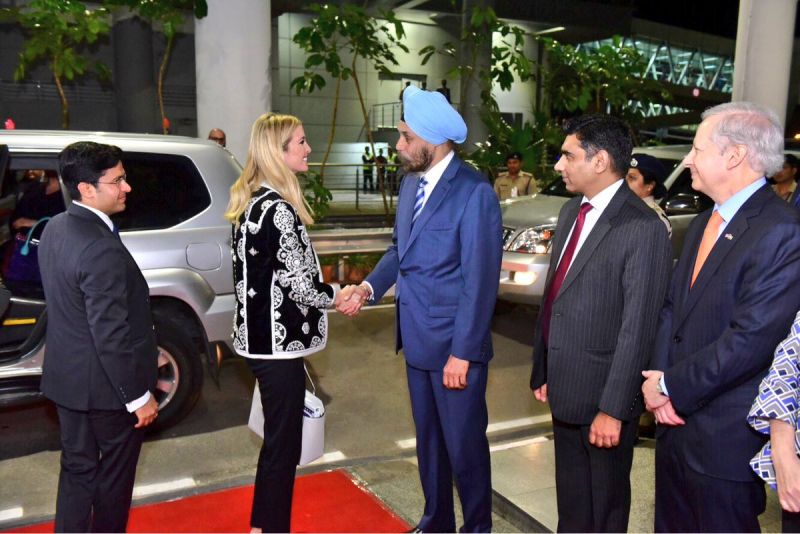 The theme for the three-day summit beginning later on Tuesday is "Women First, Prosperity for All".

This will be the first GES in which women are expected to be majority (52.5 per cent) of the participants. The theme of this year's summit demonstrates the commitment of the US and the Indian government to the principle that when women are economically empowered, their communities and countries thrive, NITI Ayog CEO Amitabh Kant has said.

Ivanka Trump delivered the keynote address at the inaugural session, along with Narendra Modi. She is also scheduled to speak at another session on Wednesday.

The summit will primarily focus on four thematic sectors -- energy and infrastructure; healthcare and life sciences; financial technology and digital economy; and media and entertainment sectors, according to Amitabh Kant.

After the inauguration, Ivanka and Defence Minister Nirmala Sitharaman are slated to participate in a panel discussion on opening up of opportunities for women entrepreneurs, Kant had earlier said.

On Tuesday evening, the Prime Minister hosted a dinner for the US President's daughter at Hyderabad's Falaknuma Palace, which has been decked up for the event.

Police have announced traffic restrictions that have forced many schools to declare a holiday.

On Ivanka Trump's itinerary was the old city as well as the Charminar, the iconic symbol of Hyderabad. She also wanted to shop at the Laad Bazaar or Choodi Bazaar, which is famous for its bangles, semi-precious stones, pearls, jewellery and silverware.

Dictatorship at its peak in Telangana: Bhim Army chief in Delhi