Jamkhandi: A clash befitting the royals is on

Jamkhandi is interestingly the first princely state among nearly 600 to merge with free India.

Once acclaimed as the ‘Kashi of Cyclists and Kusti,’ Jamkhandi,  the gateway of Mumbai-Karnataka, has given birth to many a sporting prodigy of international repute not to mention B.D. Jatti, the Maharaja’s minister, who became chief minister, Vice-President and finally Acting President. From monarchy to democracy, from the multi-hued royal insignias to the tricoloured ones, the transition has been tumultuous in many princely states including Jamkhandi. But the problems and their solutions have remained the same. For instance, one of the demands put forth by then Maharaja Shankar Rao Patwardhan  to merge his state with independent India was the construction of a barrage across River Krishna to irrigate his thirsty villages. And farmers in post-Independence Jamkhandi responded to the need for water by uniting to build the Shrama Bindu Sagar barrage at Chikkapadasalagi village, the first of its kind project in the country. Jamkhandi is now in the news for a different reason a  by-election necessitated by the untimely death of Congress MLA Siddu Nyamagouda a
few months ago. Vittal  Shastri finds out if the constituency will back the late legislator’s son who is the Congress candidate or spring a surprise by backing the BJP in the November 3 Assembly bypoll

A sugarcane growing belt nestled between two rivers the Krishna and Ghataprabha the bustling town of Jamkhandi has enough wealth in its bowels and is interestingly the first princely state among nearly six hundred in the country to merge with free India after then home minister Sardar Vallabhbhai Patel gave a call to them to unite. Before that, it was one of the Maratha states of British India and part of the Bombay presidency.

Then ruler, Gopalrao Patwardhan founded the town in 1881 and was succeeded by Ramachandra Rao Patwardhan who built the iconic palace for which Jamkhandi is pretty well known.

Polls were then different, eighty-six year old former MLA Baburaddi Tungal recalls how only farmers who owned land, had the right to vote and elect a minister in Jamkhandi province before Independence. Those were the days when netas got elected directly by the general public once in three years through the Committee of People’s Representatives.

The times have changed with the kings no longer around and the people of Jamkhandi, like many others sometimes miss their erstwhile rulers though democracy has brought them many benefits.  “The Maharajas provided drinking water to every household from the lake situated atop Jamkhandi hill by installing a pipeline and water purification plant. We used to provide only tea to voters during poll campaigns. But development has taken a back seat after money power came into play in politics and voters have stopped considering the personality of the candidate,” laments  Tungal.

The fortunes of the town are intricately linked to water supply and more so because this is a sugarcane growing region. Besides the construction of  a barrage, Maharaja Shankar Rao Patwardhan had at the time of merger, sought a road link with Maharashtra, the district headquarter status for Jamkhandi and a railway line between Bagalkot and Kudachi to link Jamkhandi to Belagavi.  Ironically, it took nearly seven decades to build a barrage which was completed just few months ago and inaugurated by Siddaramaiah when he was CM. The other demands remain unfulfilled.

Coming to elections, Jamkhandi has always been at the mercy of the caste factor. B.D. Jatti’s meteoric rise he was elected MLA from Jamkhandi for four consecutive terms from 1952 to 1972 is largely attributed to the clout he enjoyed as an influential leader of the Lingayat community. The Congress, riding on Lingayat dominance, has won the Assembly election here ten times, while the BJP and Janata Dal have managed to win two times each. 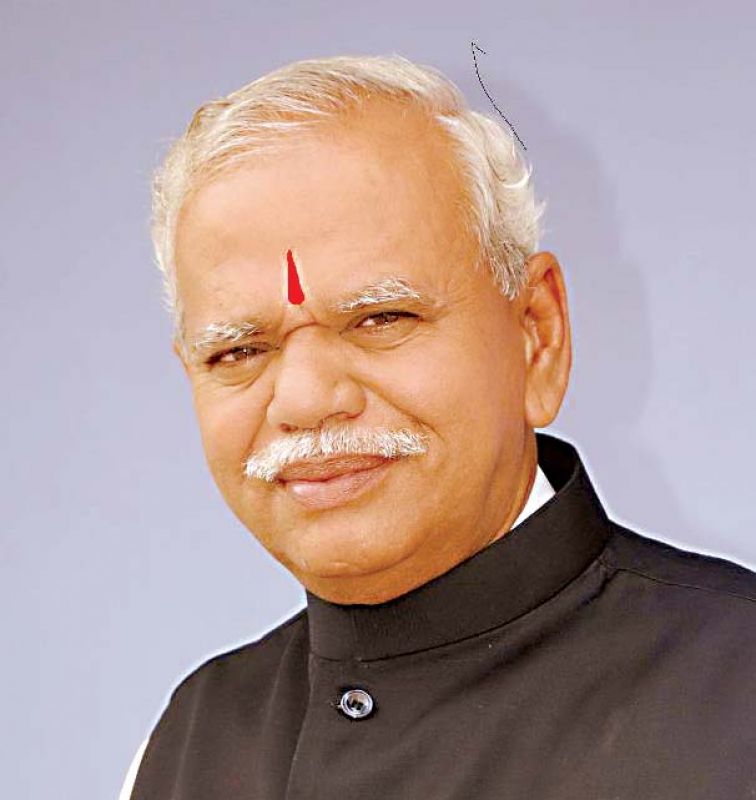 As poll day approaches, caste is back with a vengeance with the Congress and BJP deploying leaders of different castes to keep their vote bank intact. The Lingayats, Muslims, SC/STs and Kurubas constitute a major chunk of voters in the constituency and the BJP, realizing how important the Dalit vote is, has roped in Dalit leaders including Govind Karjol and Arvind Limbavali to woo the community. Prominent Dalit leader B. Sriramulu is busy in his backyard Ballariwhere his sister is the BJP candidate for the Lok Sabha bypoll.

Whether the Dalits back them or not, the Congress is confident that Kuruba voters will back the party to the hilt with former CM Siddaramaiah, who belongs to the community, extensively campaigning in the constituency. The Congress is also banking on the support of the Ganiga sect of Lingayats as its candidate, Anand Nyamagouda belongs to the community.

What is however proving worrisome for the Congress is the Lingayat backlash so evident in the May, 2018 Assembly polls after the party was accused of trying to split the community by using the separate religion tag. The BJP is keen on exploiting the ‘anti-Lingayat’ tag the Congress has earned for itself and is trying to make the best of Water Resources Minister D.K. Shivakumar’s recent admission that it was a blunder on the part of the previous Congress government to interfere in the religion status issue.

Unlike previous polls, both the Congress and BJP have managed to tide over the rebel factor. Sangamesh Nirani,  brother of BJP leader Murugesh Nirani, had posed a serious threat to the party’s prospects in the previous poll but this time,  state BJP chief B.S. Yeddyurappa has convinced him to withdraw from the fray to facilitate party candidate and the choice of the RSS, Shrikant Kulkarni’s  victory.

The fact that the Congress and JD(S) have an alliance going may not help Congress candidate Anand Nyamagouda much as the JD(S) has no presence in the constituency and no representative in the local governing bodies. The erstwhile Janata Dal had won the seat in the 1983 and 1985 elections when Ramakrishna Hegde was CM with G.S. Bagalkot representing Jamkhandi for two consecutive terms. But, the base of the party has since been eroded. Can the sympathy wave, quite visible in the constituency, swing it for the Congress candidate after the tragic death of his father Siddu Nyamagouda who incidentally pioneered the construction of the ‘people barrage’ in Jamkhandi ?  The late MLA took up a herculean task he united people for the construction of the barrage under the umbrella of Krishna River Bank Farmers Association which helped transport water from the Almatti backwaters to  irrigate more than 70,000 acres of agricultural land. The barrage is the main source of drinking water for  villages in Vijayapura and Athani taluks including 32 which were prone to drought every year despite three rivers flowing through Bagalkote.

With sympathy and the larger than life image which his father enjoyed, Anand Nyamagouda obviously has an edge. But poll predictions can go awfully wrong and more so in a constituency dominated by the Lingayats who have always been ardent supporters of the BJP.

Many Congress leaders have also not taken kindly to the ‘dumping’ of a very young candidate Anand Nyamagouda on them which could prove detrimental to his prospects.

There are few sons who have fitted the shoes of their fathers and gone on to build a bigger reputation which is why the victory of  Anand Nyamagouda cannot be taken for granted. Will the BJP win over the Lingayats once again and mar his chances? Only time and the voter in Jamkhandi can provide an answer.

‘I have youth, sympathy on my side’: Anand Nyamagouda, Congress
What are the factors that will work in your favour?
My father’s developmental works will help me win. There is also sympathy in my favour as people are grief-stricken because of his untimely death. I am young and voters prefer to elect youngster rather than elderly leaders.
Your sugar factory like other mills, has not paid crores of rupees in sugarcane dues to farmers. How can you say you will work for farmers?
The pending bills of sugarcane growers has nothing to do with politics, it is purely an industrial problem. We have paid a fair and remunerative price (FRP) fixed by the Central government, we have paid more than other mills whenever the trends in the sugar industry were upbeat.
The BJP has resolved its ‘rebel’ problem with Sangamesh Nirani supporting its candidate Shrikant Kulkarni. Has this made the contest tough for you?
Though Nirani secured around 25,000 votes as the BJP rebel in the previous election, 90 percent of these votes will not go to current candidate Shrikant Kulkarni as he has not taken these voters into confidence. Moreover, most of them are Nirani loyalists and I am confident that at least 75 percent of them will vote for me.
You are banking heavily on Siddaramaiah to get the Kuruba vote. Will the caste factor help you?
I am not fighting the election on caste basis. People of all castes will support me. I enjoy the confidence of the Lingayats as I belong to the community. Other castes including SC/STs, backward castes, minorities and Jains too will favour me. The campaign by Siddaramaiah will  help me as he  launched various Bhagyas and pro-poor schemes when he was CM. The benefits of his schemes have reached every household here.
Jamkhandi was the first princely state to merge with free India after Independence but two demands of the then ruler have not been met even after seven decades...
The survey for constructing a railway line between Bagalkote and Kudachi was taken up when my father was Union minister but it was stopped on the ground that it was economically unviable.  Jamkhandi has witnessed much growth, sugar mills, cement and lime factories have come up. The government has taken up infrastructure development apart from tourism, education and industry initiatives. This will help Jamkhandi secure the status of district headquarters.

Mangaluru airport to have online booking facility for RT-PCR test