Parents perform Aksharabhyasam to their children at Trisakthi peetham on the occasion of Moola Nakshathram in Vijayawada on Wednesday.

Vijayawada: Students made a beeline to the Kanakadurga temple atop Indrakeeladri on the seventh day of Dasara celebrations on Wednesday.

The goddess was worshipped in Saraswathi Devi alankaram this morning on the occasion of Moola Nakshatram which is considered the Janma Nakshatram of the goddess of learning. Students stood in the queue lines from early in the morning to offer prayers to Goddess Saraswati, who would help them prosper in life. 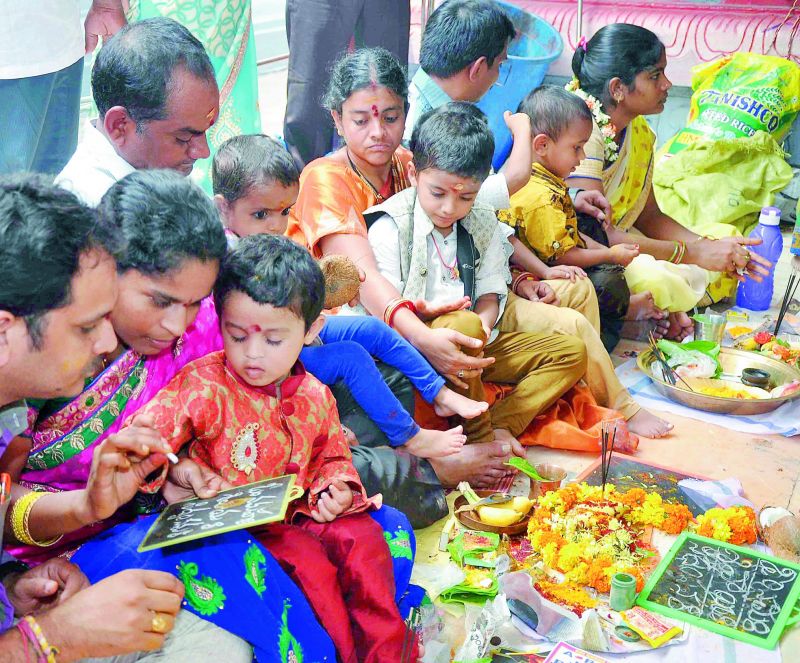 The temple which was closed for the devotees by 10 pm on Tuesday was opened for darshan by 1.30 am on Wednesday.

Thousands of devotees waited in the queue lines from Tuesday night who were allowed for the darshan through five lines. All tickets and arjitha sevas were cancelled considering the heavy rush of devotees.

Elaborate arrangements by the temple authorities yielded positive result and around 1.5 lakh devotees had darshan by 5 pm. Thousands of devotees are still waiting in the queue lines to have darshan of the goddess.

The city police took over the task of supervising the queue lines in the temple. Deputy commissioners Karanti Rana Tata and Gajarao Bhupal monitored the security and queue lines at the temple and guided the officials to ensure smooth movement of the devotees.

The police worked in shift system to control the heavy crowd at the Vinayaka temple centre on the Canal Road where all queue lines originated. However, devotees at Kummaripalem faced trouble in the early hours of Wednesday due to the failure of streetlights.

Officials supplied ORS, buttermilk, glucose to kids and senior citizens waiting in the queue lines and medical camps were set up on the premises of the temple.

Priority to the VIPs and officials continued on the auspicious day too. Their vehicles were allowed up to the temple while those of the common pilgrims were not.

"Police stalled free bus service for senior citizens and the physically challenged at a distance from the temple but allowed the vehicles of police and VIPs and it is not fair. Rules should be equal for all," said K. Gunaratna, a senior citizen from Nellore, waiting in queue line.