J&K unrest: Talks only with whosoever is ready to reject violence, says Mufti

New Delhi: Jammu and Kashmir Chief Minister Mehbooba Mufti on Sunday said that her government was willing to hold talks with only those who were ready to reject violence and help in restoring peace in the Valley, at the same time she said she wasn't averse to involving separatists if they were looking for a peaceful resolution.

At the same time, she said a "conducive atmosphere" needs to be created for a dialogue to take place and the "bunch of people" provoking youth to "gherao and attack" security camps should stop abetting violence.

Mehbooba, who met Prime Minister Narendra Modi here on Saturday to discuss the future course of action, also emphasised that the format of dialogue should be better than in the past when the central governments had nominated interlocutors and set up working groups. 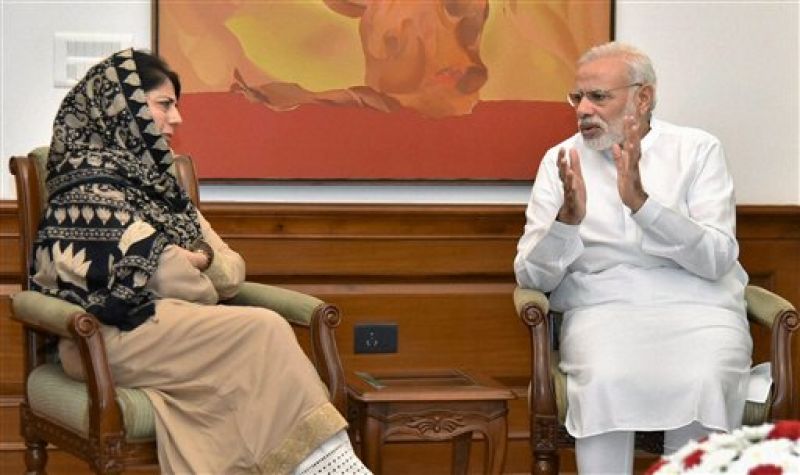 Prime Minister Narendra Modi with Chief Minister of Jammu and Kashmir Mehbooba Mufti at a meeting in New Delhi on Saturday. (Photo: PTI)

She said that "threads" need to be picked up from where these were left by former Prime Minister Atal Bihari Vajpayee, who had made a "very serious effort" by having dialogue both on external front with Pakistan and on internal front with Hurriyat and Hizbul Mujahideen militant outfit.

"What I am concerned about and told the Prime Minister is that people have lost faith in dialogue. So first dialogue as an institution has to be restored," Mehbooba said amid the unrest which has been going on in Kashmir for the last 51 days resulting in the killing of 68 people.

"We need to put people who have very credible backgrounds and can communicate with the other side," she added while noting that Prime Minister Narendra Modi and Home Minister Rajnath Singh have expressed readiness for talks for "some kind of solution to this problem".

Emphasising that "whosoever wants a solution to the Kashmir problem should understand that solution is not going to come in days or months", she said "do we make life so miserable for all that time the solution comes? Do we want our boys to get killed? Do we want them to do something which is going to have retaliation and injuries? That is something for everyone to think."

Asked who all should be engaged in the dialogue, the Chief Minister said the central government should talk to "whosoever is ready to reject violence and not support violence and helps in restoring peace."

On being asked whether talking to Hurriyat will help, she said that dialogue should be held with "everybody who wants peaceful resolution and is ready to contribute in containing the situation."

Suggesting that there should be peace before talks are initiated, she said, "Today there is no alternative to dialogue but for dialogue (to happen), you need to have conducive atmosphere."