Nitish Kumar was sworn in as Chief Minister of Bihar on Thursday. (Photo: File)

Patna: Politics in Bihar is gaining all attention for a month now. Sworn in for the sixth time on Thursday, in a little over 12 hours of his resignation, Bihar Chief Minister Nitish Kumar will face a trust vote in the Assembly on Friday.

The session has commenced from 11 am. 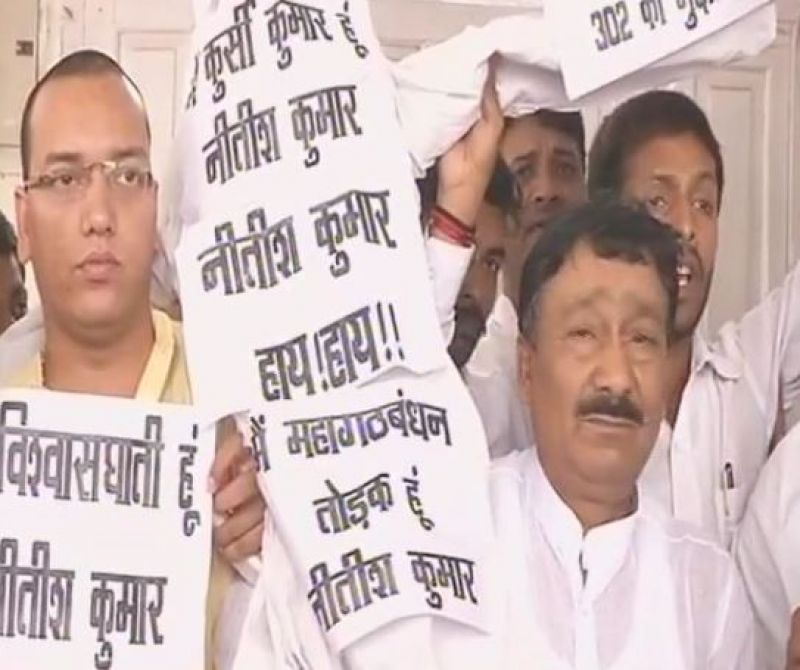 The special session has been convened for the newly formed NDA government to prove majority on the floor of the house, Assembly speaker Vijay Kumar Chaudhary said.

In the 243-member assembly, Nitish Kumar needs the support of 122 members for a majority.

Nitish Kumar has the support of 132 MLAs which include 71 from his party JD(U) besides 53 of Bharatiya Janata Party (BJP), 2 MLAs each from Rashtriya Lok Samta Party (RLSP) and Lok Janshakti Party (LJP), Hindustani Awam Morcha (HAM) 1 and 3 independents.

Keeping in view that RJD, headed by Lalu Prasad Yadav, may create ruckus during the session, the speaker is said to have directed marshals to make proper arrangements “to control the situation if it goes out of hand”, a source said.

Earlier, former Deputy Chief Minister and RJD supremo Lalu Yadav's son Tejaswi Yadav had hinted that his party will not let the house function smoothly as RJD which is the largest party with 80 seats has not been given a chance to form the government in Bihar.

Tejaswi Yadav told reporters in Patna that his party RJD has the support of 27 Congress party MLAs, 2 legislators of CPI (ML) and several independents. He also said a large number of JD(U) legislators were also planning to support the grand secular alliance.

“We deserve a chance to prove majority on the floor of the house, we have enough support to form a government in Bihar. Some of JD(U) MLAs also want to support the grand secular alliance”, Tejaswi Yadav said.

Nitish Kumar had resigned from his post on Wednesday claiming that corruption charges against Lalu Yadav and his son Tejaswi were the main reason behind his decision to leave the Grand Secular Alliance.

RJD Chief Lalu Yadav, who returned from Ranchi Thursday evening, chaired a meeting of legislators and party workers at his residence where it was decided to “oppose each and every move of Nitish Kumar and the BJP”.

Speaking on the issue after the meeting RJD spokesperson Manoj Jha told in Patna that "the party is gearing up to fight a long battle against the communal forces and since Nitish Kumar has broken gathbandhan (alliance) rules our workers will expose him. We are going to start out fight from Friday."

RJD Chief Lalu Yadav raised questions on Nitish Kumar’s sudden decision to quit the alliance. He said the whole “resignation drama was scripted by the BJP”.

“I fail to understand why Nitish Kumar decided to resign without consulting anyone, what was my son’s crime”, The RJD Chief said.

He also hinted that he may challenge the matter in the Supreme Court. RJD sources said Yadav is consulting legal experts and file a case soon.

Some countries adopt terror as policy, some block actions against terrorists: Modi