5 dead, including one on ground, as chartered plane crashes in Mumbai

Mumbai: Five people were killed when a chartered plane crashed into a construction site in a thickly-populated central suburb of Mumbai on Thursday afternoon.

The plane was about to land at the Mumbai airport, when it crashed nearby in Ghatkopar. The black box of the chartered plane was recovered.

Maharashtra Chief Minister Devendra Fadnavis visited the crash site in Ghatkopar to assess the situation. He said, "It is a worrying incident. What were the reasons behind the crash and who is responsible for it needs to be found out." 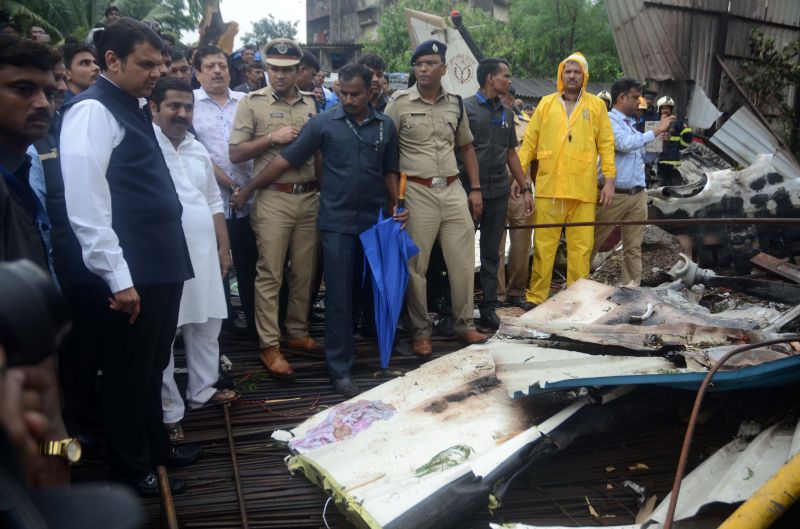 Among those dead were two pilots, two aircraft maintenance engineers, who were also on board, and one person on the ground, the Directorate General of Civil Aviation (DGCA) said.

The small aircraft, which was on a test flight, crashed in Sarvodya Nagar of Ghatkopar area a little after 1 pm.

The aircraft was a Beechcraft King Air C90 turboprop.

A team of DGCA officials rushed to the crash site for a preliminary investigation, the official said. It is expected that the detailed enquiry will be done by the Aircraft Accident Investigation Bureau (AAIB), he added.

Uttar Pradesh Principal Secretary, Information, Avnish Awasthi said the plane had been sold by his state to a Mumbai company, UY Aviation, after it had met with an accident earlier in Allahabad.

"A DGCA team will conduct a preliminary investigation into the crash," said DG Civil Aviation B S Bhullar, adding that the Aircraft Accident Investigation Bureau would also launch a detailed probe.

A video on Twitter showed a burning body near the crash site.

Images tweeted by news agency ANI showed thick flames and black smoke rising from the wreckage. It took over an hour to put out the fire.

#WATCH: A chartered plane crashes near Jagruti building in Ghatkopar where a construction work was going on. #Mumbai pic.twitter.com/ACyGYymydX

Congress in disarray in UP, Priyanka rallies cancelled

PM Modi departs for three-day visit to US