Indo-Pak ties: Whom to talk to in Pakistan, asks Narendra Modi

New Delhi: In the wake of India’s failed NSG membership bid at Seoul last week, Prime Minister Narendra Modi on Monday told a TV channel that there had been “no mishandling” of the issue and that dialogue with China on India’s membership to NSG would continue.

Speaking on Indo-Pak ties, the Prime Minister, describing peace as the “supreme objective”, said that overtures for friendship would not be at the cost of national interest.

In a barely-veiled reference to the Pakistan Army, the Prime Minister, when asked about where he would draw the Lakshman Rekha vis-a-vis Pakistan, said, “To whom do we talk to decide about the ‘Lakshman Rekha’… the elected government or with other actors?” 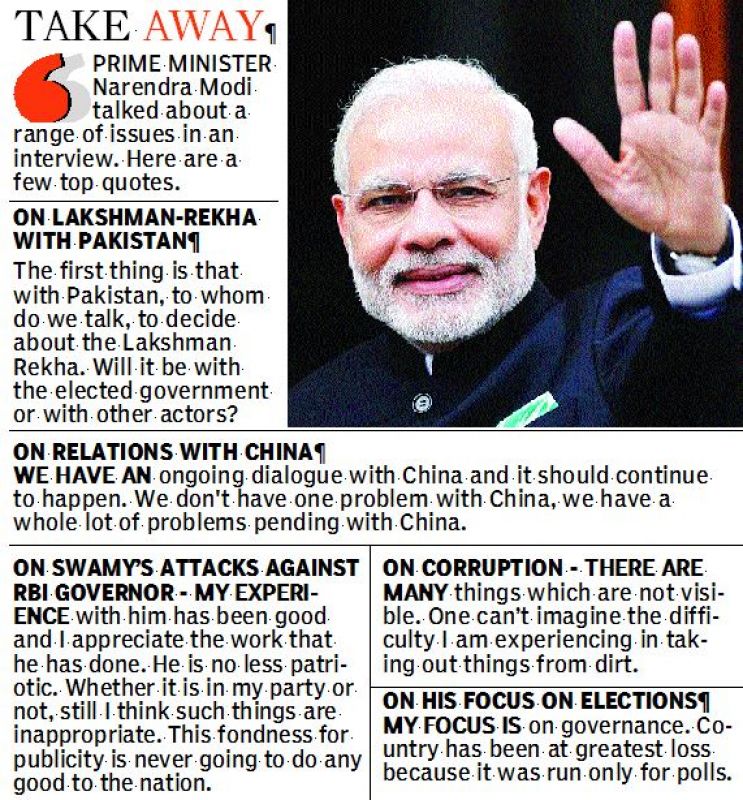 Mr Modi added that while the world is praising India, Pakistan is finding it           difficult to respond to India’s peace efforts. “If we had become an obstacle, then we would have had to explain to the world... The world knows our intentions. Like on the issue of terrorism, the world never bought India’s theory on terrorism.

“We do not have one problem with China, we have a whole lot of problems pending with China… Slowly and steadily efforts are on to find solutions to them one-by-one,” he said. The PM also said he treated ties with US and Russia with “equal respect”.