They joined the BJP at the party's headquarters here in the presence of BJP general secretary Kailash Vijaywargiya and Mukul Roy. (Photo: ANI | Twitter)

TMC's Tusharkanti Bhattacharya and CPI(M)'s Debendra Nath Roy were the other MLAs from the state who joined the saffron party along with several councillors, BJP leader Anil Baluni said.

Subhrangshu Roy was suspended by the TMC for his "anti-party" activities after the Lok Sabha results were announced.

"I am joining the BJP after being inspired by Modi ji," said Subhrangshu, who was recently suspended from TMC for six years for anti-party activities.

Senior party leaders, including West Bengal party in-charge Kailash Vijayvargiya and Mukul Roy, were present at the party headquarters for the occasion. 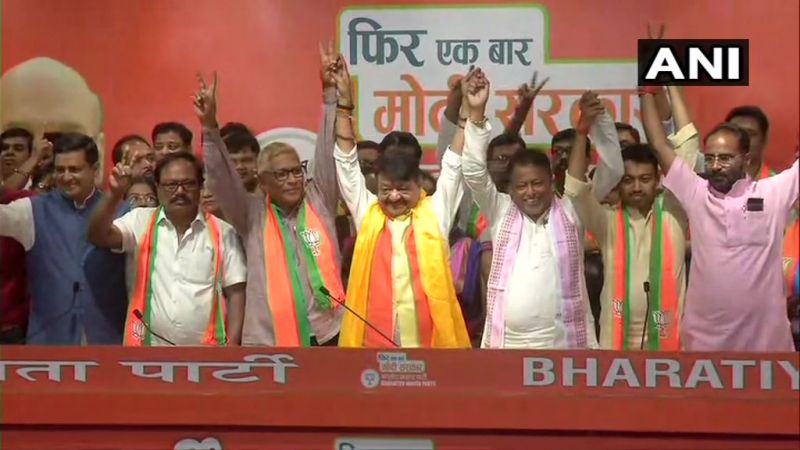 "Like the elections were held in seven phases in West Bengal, joining in BJP will also happen in seven phases. Today was just the first phase," Vijayvargiya asserted.

Before the announcement, he had said that "such joining will continue in future as well".

With most of the councillors switching their political affiliation, three municipalities -- Kanchrapara, Halishahar, and Naihati -- will be now controlled by the BJP. Currently, TMC controls these urban bodies.

A Zila Parishad member from Purba Bardhaman district and some village heads have also chosen to work for BJP.

Addressing the media on the occasion, Mukul Roy said, "There are some more people who are ready to join the party. You will see a line of MLAs joining BJP starting June 1."

"Like the elections were held in seven phases in West Bengal, joinings in BJP will also happen in seven phases. It was the first phase today," added Vijayvargiya.

"The people who are feeling suffocation in TMC due to Mamata Banerjee's dictatorship want to come to the party but we would not let everyone come in. Only leaders who fit in BJP will be inducted in the party," he mentioned.

Vijayvargiya also said Chief Minister Mamata Banerjee-led government may have to "struggle for its existence" in the coming days.

"We extend our wishes to Mamata ji that she retains the Chief Minister post till 2021 but if she herself cuts short her period, only she will be responsible for the outcome. We want to make our government in the state in 2021. But if her people continue to leave her, we can do anything," he added.

The BJP broke into the TMC citadel winning 18 Lok Sabha seats, 16 more than it bagged in the 2014 general elections, while TMC bagged 22 out of the 42 Lok Sabha seats in the state. Congress managed to win just two seats, while the Left parties drew a blank.

With inputs from ANI.