Bengaluru: A pavement paved with trash

The footpath near the ASC Centre at Ejipura filled with garbage. (Photo:DC)

Bengaluru: The footpath from Ejipura towards Domlur, which passes through the army residential quarters, is not only laden with garbage, but at certain stretches it is either broken or non-existent. The illegal dumping of garbage and construction debris on the footpath forces pedestrians to use the busy road and risk their lives. Though the BBMP had assured that CCTV cameras will be installed to track those dumping garbage, nothing has been done so far. The road near the Army JCO residential quarters from Outer Ring Road is also in a bad shape.

The election is over but the pending projects promised a year ago by the then government are far from over. The garbage on the footpath near the ASC Centre at Ejipura is not only an eyesore, but raises a question regarding the effectiveness of the BBMP in waste management.

“The stretch of footpath from Ejipura towards Domlur passing through the army residential quarters are not only laden with garbage, but the footpath has itself disappeared at certain stretches or broken at regular intervals. Where are the cameras which the government had promised to install in the wards?” wondered Priyaranjan, a local resident. 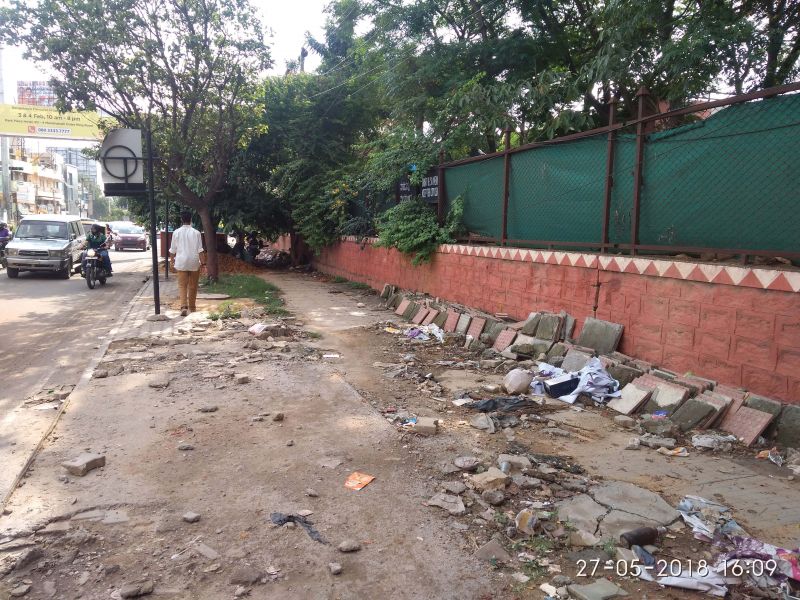 A stretch of the footpath that is broken. (Photo:DC)

The illegal dumping of construction debris under the transformer and on the walkways has compelled the pedestrians to use the busy street. DC has also learnt that roads in the ward are also in a dilapidated condition.There have been accidents due to poor lighting and iron bars poking out of the footpath. However, these incidents failed to wake up the BBMP.

Ujjwal Gurung, a resident of Koramangala, traverses through Ejipura daily to reach his office in Indiranagar.  He said he has not come across violators throwing garbage on the footpath, but he once met with an accident due to iron bars poking out of the footpath. “The construction debris and the fine particles of sand are slippery and in the night one barely pays attention as the area is choked with traffic. Last year, after getting out of the cab, I chose to walk towards Sony junction but slipped on the footpath. It is indeed dangerous,” he added.

With poor lighting the footpaths are not safe. The dust from the government construction projects diffuses into the air causing irritation in the eyes of the commuters. The BBMP which is on a construction spree maintains that the pending projects will soon see the light of the day and got delayed due to the election and change of government.

Suhas, a resident of Ejipura lamented, “The corporator is not at all reachable. He rarely takes our calls and the area has water shortage plus one can list the civic issues that the residents are facing for the past many years. Since the election is now over, hope the government acts or else we will have to vote out the corporator in the next BBMP election.”

Illegal dumping of garbage has become a menace near Army quarters at Ejipura. Are you aware of this problem?
We have been taking a lot of measures to curb illegal dumping of garbage. During night hours people throw away garbage. We have recommended CCTV cameras to be set up and take serious action against the offenders, who are doing like this despite repeated reminders.

The road near the Army JCO residential quarters from Outer Ring Road is also in a bad shape?
There was dispute over the ownership of the road between BBMP and Defence authorities. Now the issue has been resolved.

If the property issue is settled then why the road is not yet asphalted?
We have levelled the road and had put gravel too. But BWSSB wanted to lay water pipeline on the road. So we are waiting for the water board to lay the pipes. They have assured to complete the process soon so that work can be started.

Byelection in Atmakur on June 23

Daily flight from Kadapa to Delhi