The book addresses issues that have been plaguing the island for years.

Bengaluru: About 20 years ago a work related trip led Pankaj Sekhsaria to the Andaman and Nicobar islands. He soon realised that these tiny islands had much more than what met the eye. 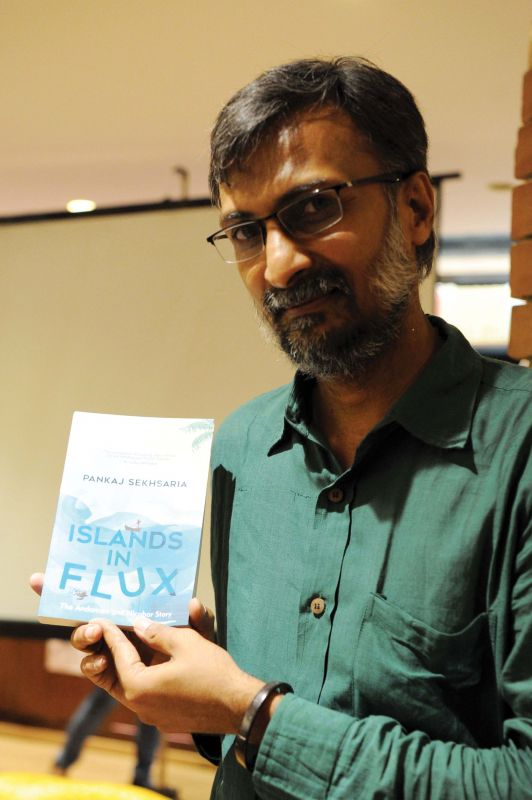 Pankaj Sekhsaria with his novel Island in Flux

He decided to write his first novel, in 2014, a fiction on his experience on the Islands but it just wasn’t enough. “My debut novel explores the island through fiction, but after two decades of knowing the state and constantly writing, researching and just watching, I felt there needs to be a concise book of whatever I have collected,” Pankaj said.

His latest work Island in Flux, published by Harper Collins, provides insight and perspective related to the environment, wildlife conservation, development and the island’s indigenous communities. “At first glance people generally think of a few things when they think of these Islands – Cellular jail, the 2004 tsunami and tourism. The other important complexities of the ecology, geography, its geology remain unknown. Its ground realities and its fragility are not spoken of or even noticed. The book asks the question why,” he explained.

The book addresses issues that have been plaguing the island for years. For example, there have been constant talks of renaming the islands over the years. “Personally, I don’t understand what purpose it serves to the Island itself,” he said with a hint of displeasure in his voice.

The indigenous population of the islands, the Jarawas have been living on the islands for over 40,000 years. “They existed before the British colonization, before they were a part of India but why isn’t that recognised? These islands already have names in the local language, if we really want to rename, why can’t their heritage be at the forefront?” he wondered.

Even in terms of development, the Island is at risk. “I am concerned by the way things are moving,” he says, “The unstable geology of the islands don’t seem to concern the tourism development. Relaxation on High Tide Zones is asked for, but if a tsunami befalls, they are only going to pile up more compensations; pending since 2004. This book is my way of showing this flux.”

Ex-PM Manmohan Singh admitted to AIIMS with weakness after fever