The summit is being seen as an effort by India and China to rebuild trust and improve ties that were hit by the 73-day-long Doklam standoff last year. (Photo: Twitter/@MEAIndia)

The menu card designed for the private lunch hosted for PM Modi had colours of the Indian flag, along with the picture of national bird peacock.

Earlier in the day, Modi and Xi walked along a sidewalk on the shores of the picturesque East Lake here and later sailed in the same boat for "peace, prosperity and development" in a relaxed and friendly atmosphere. 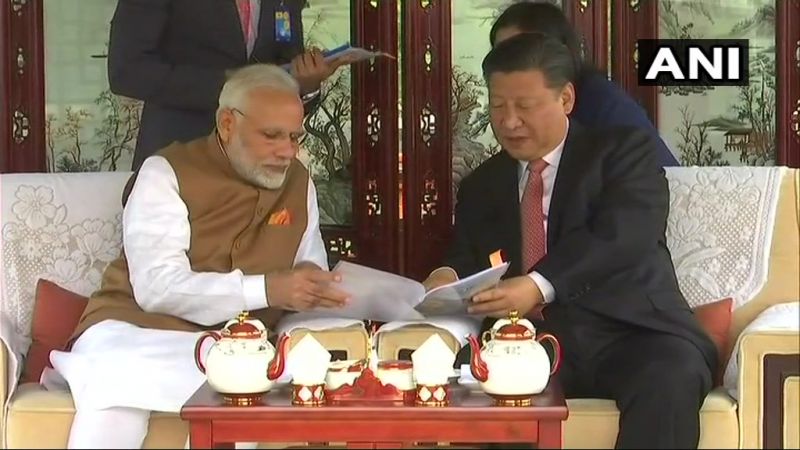 Modi and Xi on Saturday began their last round of one-on-one talks on the second day of a two-day informal summit.

Prime Minister Narendra Modi on Saturday said he held "extensive and fruitful" talks with Chinese President Xi Jinping during their first round of two-day informal summit in Wuhan on Friday.

"I am very pleased to meet with President Xi Jinping in Wuhan. We conducted extensive and fruitful talks and exchanged opinions on strengthening India-China relations and other international issues," Modi said in a post in the popular Chinese social media Weibo, where he has 1,83,112 followers.

"Thank you, President Xi Jinping, for the wonderful gesture of personally accompanying me in the Hubei Provincial Museum. The Museum is home to great facets of Chinese history and culture," he said.

Billed as 'heart-to-heart', the informal summit aimed at evolving consensus between the two leaders to look for solutions to some of the most contentious issues including the border dispute bedevilling the two countries.

The summit is being seen as an effort by India and China to rebuild trust and improve ties that were hit by the 73-day-long Doklam standoff last year.

Attempting to bridge the differences between the two countries, Prime Minister Modi has also offered to host the next informal summit with Xi Jinping in India next year.

The two leaders began their informal meetings way back in 2014 when Xi was hosted by Modi at the Sabarmati Ashram of Mahatma Gandhi in Gujarat. They have met and interacted with each other in about a dozen international meetings since then.

BJP targets Congress, Gupkar Alliance over their stance on Article 370

WHO to set up centre for traditional medicine in India