After Kapus, Andhra Pradesh govt to help BC students

Visakhapatnam: A move which is being seen to placate the anti-Kapu reservation forces, the state government has now introduced a foreign education sponsorship scheme for the students of Backward Classes- NTR Videshi Vidyadharana Overseas Scholarships.

After eligible Kapu youth in the state, students from BCs can now approach the state government for a financial grant of Rs 10 lakh to study abroad.

Around 1,000 students from BCs can avail the Rs 10 lakh assistance to pursue higher education in foreign countries through the recently introduced scheme. Recently, the state government had released Rs 52 crore to meet the expenditure of the newly introduced scheme.

People belonging to the Backward Classes have been opposing Kapus demand to include them in BCs list citing that Kapus will eat away their reservation benefits. 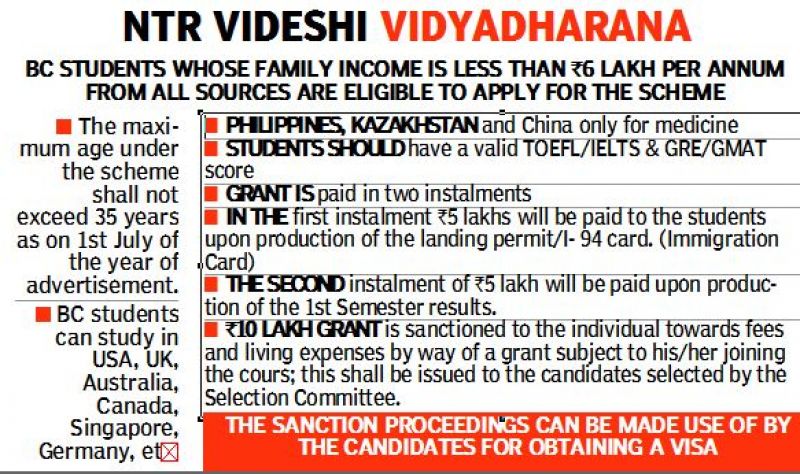 “While we welcome such a scheme for the benefit of students from the BCs and appreciate it, this is nothing but appeasement as we are strongly objecting inclusion of Kapus in the  BCs list.  At the same time,  the government should ensure that the eligible and deserving students get the benefits of the scheme,”  said All India BC Development Front Federation, state president, V.S. Divakar Pakki.

“The post-liberalised economy has thrown vast opportunities and challenges in India and abroad with respect to education and jobs. Students from the BC community are often handicapped because of their extreme backwardness and social stigma to access the benefit of pursuing education abroad. The proposal to introduce the NTR Videshi Vidyadh-arana was examined by the government and financial assistance would be extended to BC students to purse studies abroad under the BC Sub-Plan 2016-17. NTR Videshi Vidyadharana will be sanctioned to 1,000 students every year,” said principal secretary to the government, G. Anantha Ramu in GO No. 29.