Bengaluru: If the man behind journalist Gauri Lankesh's murder had not been on the lookout and had not seen her taking a different route home, the hired assassin would have missed her completely and Gauri Lankesh would probably have still been alive today!

Instead, Deccan Chronicle has learnt that the lookout, who was working in tandem with the bike-borne shooter, spotted Ms Lankesh heading home early and to his shock, taking a completely new route back. It meant, she would have arrive earlier than they had envisaged, giving her enough time to get in the house, and to safety.

Even as the now 100-member-strong Special Investigation Team (SIT) is spreading its vast web of human, technology (humint) and monetary resources to identify Gauri’s killers, two things have reportedly become clear; that it was an assassin for hire and secondly, there was more than one person working on the plan to kill Gauri outside her house on September 5.

“An assassin was hired to do the job. On September 5, the assassin was in touch with someone on the phone, who was tracking Gauri’s movements,” he said.
According to sources, Gauri’s assassin was allegedly alerted on the phone by someone regarding the route she had taken that fateful evening and the time that she was likely to arrive at her house. 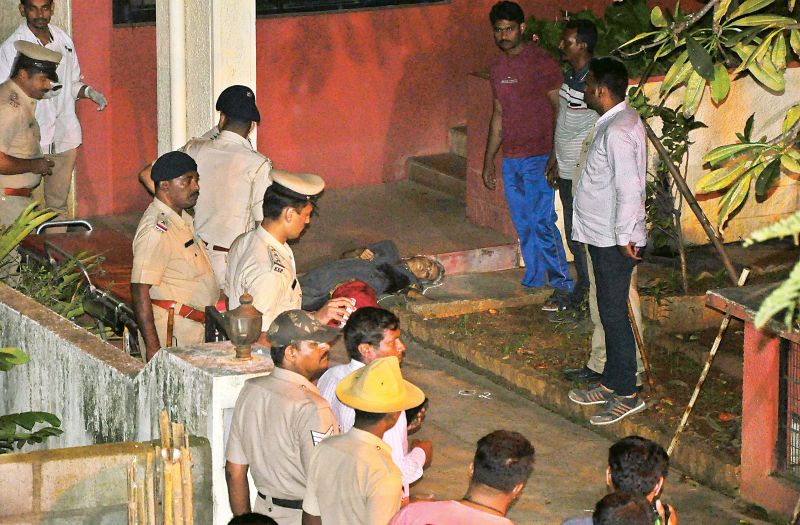 Policemen at Gauri Lankesh’s house after she was shot dead. (Photo: DC)

‘Gauri killer was in touch with another man’

“How did the bike-borne killer know that Gauri would take that particular road to her house and not the other one, which she usually used to take? He would have missed his target if he had taken the other road to her house. He knew with certainty that she will take that particular road and this information was allegedly shared with him by a second person. The criminal was in touch with someone else, who was tracking Gauri that evening. The job was done in less than five minutes. The other significant lead is that the assassin may not be the plotter. For the SIT it is important to get the killer but that alone may not be enough to get to the person, who plotted her murder,” said the officer.

The Gauri murder case is being compared with the other three murder cases; of rationalist Narendra Dabholkar, CPI leader Govind Pansare in Maharashtra and Kannada litterateur M.M. Kalburgi in Dharwad because of several striking similarities such as, the commonality of targets (all of them were liberals), the use of bike-borne assailants, thirdly, the ballistic reports, which have confirmed that in all the four cases the perpetrators had used 7.65mm bullets to finish their targets and lastly, the location.

Dabholkar and Pansare were murdered, very close to their homes, when they were out on a morning walk. Kalburgi was shot at point blank range inside his house and Gauri, was similarly, killed just outside her home. The difference between the various killings is that while the first three murders took place in the morning, Gauri was killed at 8pm at night.

“There is a fourth similarity. In the earlier three cases, the targets were static. In Gauri's case, the target was on the move. In Gauri’s case they had conducted a recce of the house to make sure of the location of the target, " the source said.
Squashing speculation that the number plate would lead to the killer, the source also said: “The number plate on the motorbike of the assassin may be fake, and may not throw up a strong lead.”

On why the government had announced a reward of Rs 10 lakh for credible information leading to the arrest of the accused in Gauri murder case, another officer said: “Money plays a significant role in solving complex criminal cases. The investigating team has to spend a lot of money to follow leads, Very often leads go dry and the amount spent on the chase has to be written off. Credible Intelligence and information is bought at phenomenal price. The bigger the case and hotter the pursuit, bigger is the price for credible information.”