BENGALURU: An international tribunal in The Hague has ruled against the Union government on cancellation of a contract between Antrix Corporation, the corporate arm of Indian Space Research Organisation (Isro), and Devas Multimedia Pvt Ltd, for lease of S-band spectrum onboard two satellites, but the space agency not only sought to play down the ramifications of such a ruling but also indicated a legal recourse against it.

The Permanent Court of Arbitration (PCA) at The Hague, on Tuesday, ruled that the government’s actions in 2011 amounted to expropriation and that in annulling the Isro-Devas contract, the government has breached treaty commitments to accord fair and equitable treatment to Devas’s foreign investors.

Incidentally, this tribunal’s decision is the second such arbitration outcome in the Antrix-Devas controversy. Last year, the International Chamber of Commerce (ICC)’s arbitration body, International Court of Arbitration, asked Antrix Corporation to cough up damages of $672 million to Devas Multimedia Pvt Ltd for “unlawfully” terminating the deal on grounds of national security. Devas Multimedia Pvt Lrd has since moved the Delhi High Court for recovery of damages. 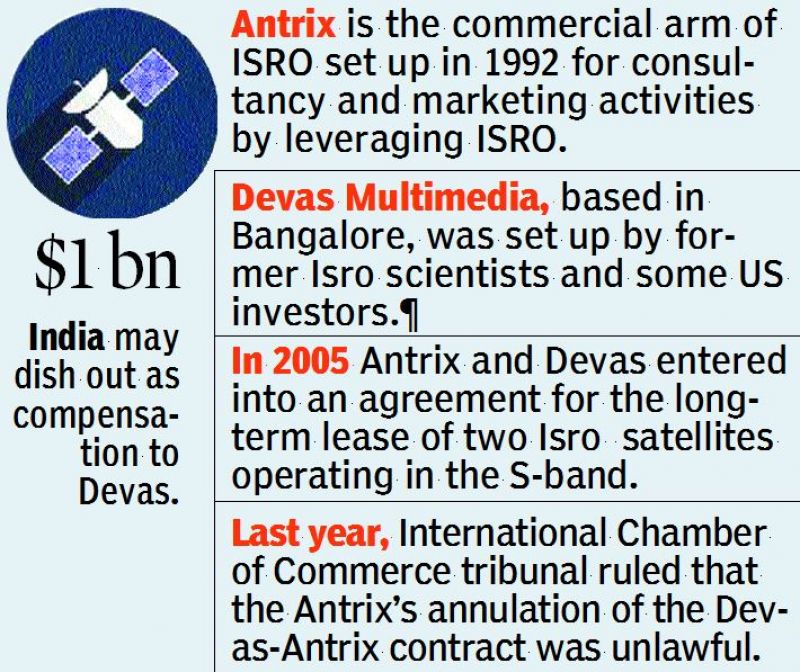 The Department of Space, however, maintained that the precise quantum of compensation was yet to be determined but shall be limited to 40 per cent of the value of investment.

Will take legal recourse, says Department of Space
“The award of the tribunal is being examined and legal recourse, as deemed fit, will be taken. We also remain committed to pursue our larger national interests including sovereign strategic security interests in this matter,” said a release of Department of Space while maintaining that the government had cancelled the contract by invoking essential security interests through a “well reasoned, valid and proper CCS (cabinet committee on security) decision”.

Soon after cancellation of the contract, the Union government had barred former chairman of Isro, Gopalan Madhavan Nair, and four other top space scientists from holding any position in government organisations.

Such action came in the aftermath of a report submitted by a committee headed by former Chief Vigilance Commissioner Pratyush Sinha that Mr Nair had not informed the Union Cabinet about the contract signed with Devas Multimedia Pvt Ltd for lease of S-band transponders. Officers of the Enforcement Directorate (ED) and the CBI are investigating the contract.

Places of worship set to reopen on Monday

Places of worship set to reopen on Monday