As the Chief Minister Edappadi K. Palanisami is scheduled to meet Prime Minister Narendra Modi on Monday to seek his help to get the President’s assent to the act which exempts the students of the State from Neet, the shocking details of the 2016 exam results came to light with an RTI reply. 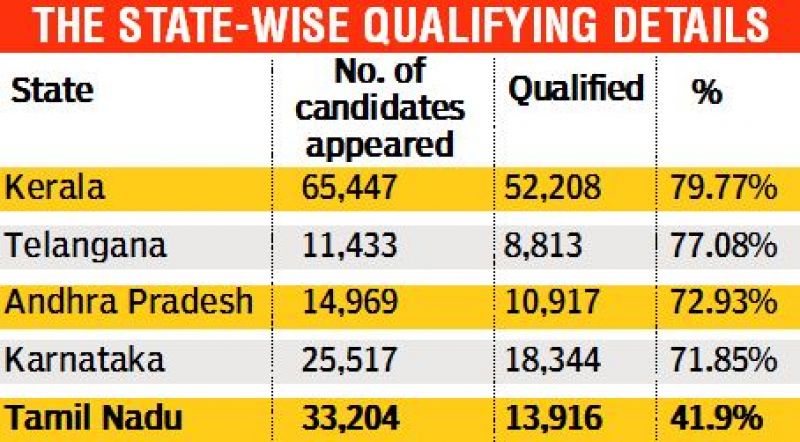 In replying to an RTI query on the Neet 2016 results, S.Dharini Arun, deputy secretary of CBSE, which conducted the common medical entrance test in 2016, said that of 33,204 candidates from the state who appeared for the exam only 13,916 candidates (41.9%) have qualified for studying MBBS and BDS courses.
This is the lowest percentage as compared to all other southern states.

The neighbouring state Kerala has topped the qualifying percentage with 80% of them having qualified to study medicine last year. From the state, 65,447 candidates have appeared for the exam and 52,208 (79.77%) qualified.

However, when asked for the board wise breakup of the qualified candidates, the CBSE in its reply said that it is not maintained by the board. It also forwarded another query related to the details of the students admitted in 15% all India quota in MBBS and BDS to Medical Council of India.

“Neet exam requires separate preparation. Our classroom coaching will be of no help to the students who prepare for the common medical entrance test,” said P.Swaminathan, secretary, SRV schools in Namakkal and Tiruchi districts.

Prince Gajendrababu, gen. secretary, State Platform for Common Schools System said, “Only students who have got money and time to spend for coaching classes will be able to qualify. That's why the performance of the Tamil Nadu students is poor.”

“In Kerala, AP and Telangana, the Neet coaching is a big market. There are more coaching centres and importance is being given to competitive exams. But centres charge exorbitant fees. Students without money cannot join these programmes even if they have aspirations, attitude and aptitude skills,” he said. He further said, “The high profile schools in TN now have entered an agreement with the coaching centres for Neet and JEE. The eligible and poor students will opt out of the race.”

“The students were not trained for entrance exams as there was no entrance exam from 2007 in the state. And  Neet was suddenly imposed on them,” said Dr G.R. Ravindranath, Doctors' Association for Social Equality.

While batting for exemption of TN students, he said that the students should be encouraged to participate in the national level exams. “Of 2 lakh seats in various central govt institutions, there are not even one percent representation from the state.”

How the students got admitted to medical courses in 2016? CBSE has also provided All India Rank to candidates. Admitting agencies drew a merit list based on All India Rank for MBBS and BDS seats falling under their jurisdiction. Last year, 15% All India quota seats and seats in deemed universities and private medical colleges were filled through Neet exam. The state government controlled seats were allowed to be filled based on the current admission procedures.