Alwal: The GHMC’s age-old method of laying new roads on damaged roads has resulted in severe inconvenience for a few colonies in Temple Alwal that have been inundated due to the recent rains.

Even though flood water is receding in a few colonies, there is no respite for the nearly 700 families in these two colonies. “Around 60 families living on the ground floor are seriously affected,” Mr Reddy said. He added that the road was laid six months ago on top of the earlier CC road. “This affected the slope between colonies on either side of the road,” he said.

The Nacharam main road has been cut off for more than three days due to water overflowing from Patel cheruvu. A small bridge in Errakunta over the nala was destroyed on Sunday for the third time, hampering movement of people.

Local politician T. Ramachandra said, “Due to the two sluices remaining blocked, excess water from Patel cheruvu flows with high pressure through the single open nala. As it has been heavily raining since the past few days, the pressure has increased manifold and water has spilled outside, cutting off the road. If the two sluices could have been opened, then excess water would have drained.”

He said, “There is a need to remove even the water hyacinth which covers the entire lake, which needs to be desilted. This will also help in increasing the water containing capacity of the lake.”

Mr M. Sandeep, a resident of Errakunta, said, “People do not dare stay outside after dark due to the mosquitoes. No medical camp has been set up in our area since the flooding. There is stagnant water at some places.” 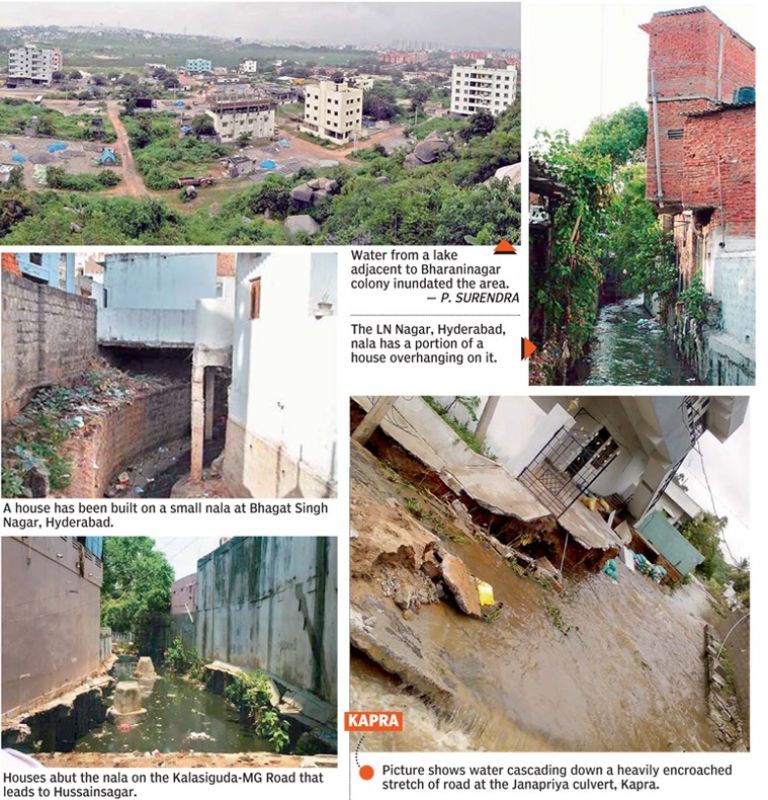 Moula Ali: Flood from the hill

Water flowing from the three hills at Moula Ali gushed into the homes of residents on Sunday.  Such was the force of the water that it damaged the road and drinking water pipelines at many places. Compound walls of many small homes collapsed. Mr Mohammed Salim, a flower vendor, said, “The water came down the hills and collected in those homes that are at a lower level. However, it was pumped out and has not stagnated in our area.” Ms Fatima Bi, a home maker, said, “We are worried about drinking water as the pipelines have broken.”

As the water levels in cellars at a few apartments in Nizampet, Balajinagar and Bandari Layout came down, citizens who vacated their flats have begun returning to their houses. Except 25 apartments at Bandari Layout and Nizampet, flat owners of all the other apartments got a little relief on Sunday.

On the insistence of the police and GHMC officials, about 95 per cent of residents have vacated their flats. A few localities are still inundated in Nizamabad and officials and NGOs have supplied food and other material to the public at low-lying areas at Dharaninagar with the help of boats.

A column of Army is still on stand by at Nizampet and they along with other officials diverted water at Turka Cheruvu by strengthening the bund with sand bags. Minister P. Mahender Reddy who visited Nizampet, Kukatpally and surrounding localities directed officials to focus on communicable diseases. Fire officials are still clearing water.

Over 400 families living in RK Towers, Vamsy Homes and other apartments and buildings in Mayur Marg are suffering due to lack of a proper drainage system. The heavy rains since last Tuesday  made the lives of residents of these apartments and the adjoining slum, Allam Thota Bavi, miserable.

At least five commissioners of MCH and later GHMC have visited Mayur Marg in the last 16 years. Even ministers and MLAs have visited but the flooding problem has not been solved. “A star hotel was constructed recently at the entrance of Mayur Marg and its drainage has been connected to the existing line without laying a new line,” said Ms J. Shama who had unsuccessfully contested as a corporator from Begumpet division that covers Mayur Marg too.