Villagers at Kadikambatti village at Kotagiri stage a demonstration to protest the allotment of land near the village to shift race course there. Land near Kadaikambatti village which is proposed as alternative site for Ooty race course. (Photo: DC)

Ooty: The decision taken by the Nilgiris administration to provide an alternate site at Kadaikambatti village limits in Kotagiri, 50 km from this hill town, for the relocation of the Ooty race course which is run by Madras Race Club(MRC), is drawing flak as the villagers there have begun to protest the decision. 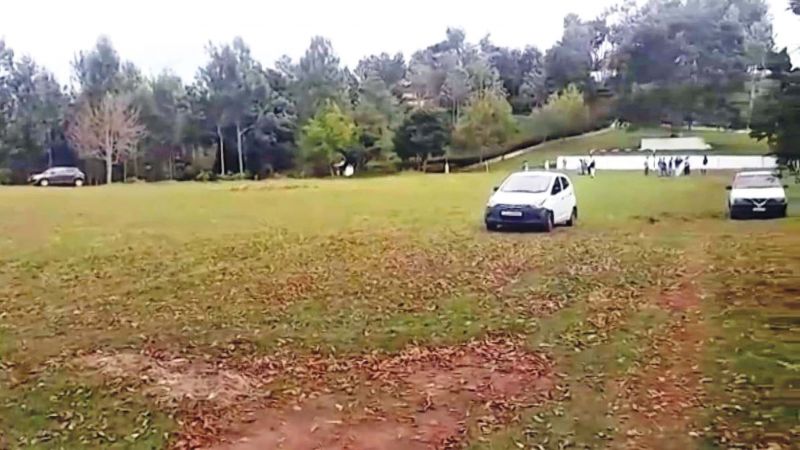 Land near Kadaikambatti village which is proposed as alternative site for Ooty race course. (Photo: DC)

The villagers in Kadakmabatti had been organizing protest demonstration in the village over the race course issue since Saturday.  Mr. Hala Gowder, the village head there said that Kadaikambatti area is an ancient Badaga village where in culture and tradition takes the first priority.

“The attempt to set up race course, as horse racing is a sort of gambling, would spoil the age old culture and tradition in the area that would lead to undesirable consequences in the future.  This proposal should be scrapped at once,” he added.

Meanwhile, Mr D. Venugopal, director of Nilgiri Documentation Centre, based at Kotagiri, said that the suggestion of the Nilgiris district administration to allot an alternative  site for the MRC to conduct  horse racing at the Kadaikambatti limits in Nedugula panchayat of Kotagiri is highly regrettable, misleading and insensitive.

“Nedugula panchayat at the eastern extremities of Nilgiris is a Badaga habitation and an agricultural area and holds the most sacred spot of the Badaga community. It is insensitive of the district administration to suggest a place nearby for a gambling sport without any regard for the sentiments of Badaga community which is the backbone of commerce and farming in Nilgiris,” he noted.

Railway proposals: Pay user fees to get on or get off a train

President puts his stamp on fast and furious farm bills