Chandigarh: Thirty-six people lost their lives in Haryana after Dera Sacha Sauda followers went on a rampage following the conviction of their sect chief Gurmeet Ram Rahim Singh by a Central Bureau of Investigation (CBI) court here in a rape case, the Punjab and Haryana High Court was informed on Saturday. The quantum of sentence will be announced on August 28.

Haryana DGP B S Sandhu said that Ram Rahim Singh would not be produced in the Panchkula court while the sentence will be pronounced through video-conferencing.

"Our efforts remain to make it possible through video-conferencing; if judge is required then everything will take place in Sonaria Jail," DGP said.

Baldev Raj Mahajan, Advocate General, Haryana, submitted in the court that there were 32 casualties in the state, of which twenty-eight were in Panchkula alone.

He said that one of the 28 dead had been identified while the remaining were still unidentified.

As many as 524 people were arrested in Panchkula, 24 vehicles seized, five pistols with 79 rounds and two rifles with 52 rounds were recovered, he said.

"Eight FIRs have been registered in Panchkula," Mahajan informed the court.

A special hearing was held in the High court here on Saturday for monitoring the law and order situation in the region and other related issues following the violence which broke out on Friday after the conviction of Dera Sacha Sauda chief Singh by a CBI court. 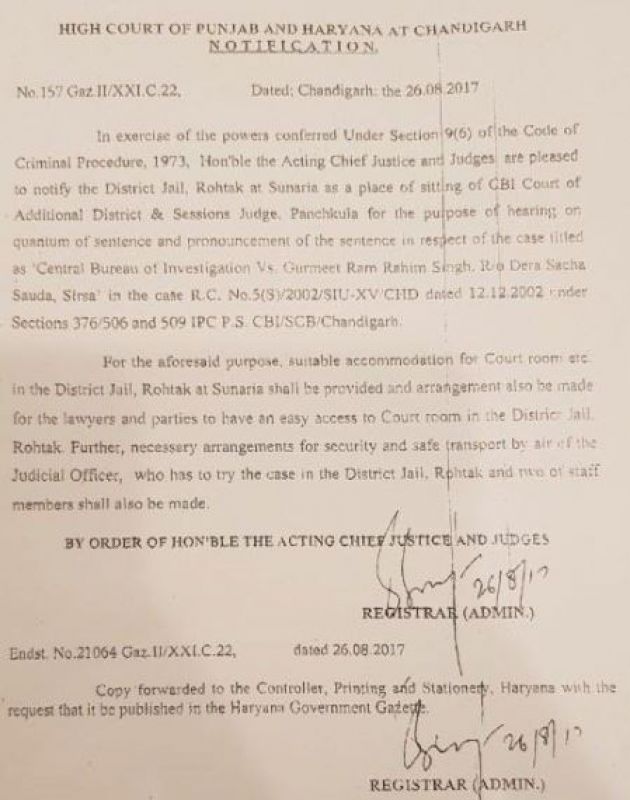 The Punjab and Haryana High Court rapped the Haryana government for the violence saying, "you let Panchkula burn for political benefits".

The high court asked the state government to provide details of Ram Rahim Singh's movable and immovable properties in Punjab and Haryana before the next hearing on August 29, reported ANI.

The High Court bench has been during the past few days hearing a Public Interest Litigation (PIL) filed by a Panchkula resident, who raised law and order concerns stating that over 1.5 lakh people had entered the district despite prohibitory orders.

Atul Nanda, Advocate General, Punjab, submitted the status report with regard to law and order situation in Punjab.

The report mentioned that there have been as many as 51 incidents in Punjab and 39 FIRs were registered. Besides, 19 miscreants have been arrested including Gurdev Singh, a state level office bearer of Dera Sacha Sauda.

There has been no casualty although there has been damage to public and private property for which assessment would be carried out, Nanda said.

■Wary of violence, Army nears Dera HQ in Sirsa ahead of Rahim sentencing

'What UPA? There is no UPA now': Mamata Banerjee