In state-level performance in water resource management, Telangana state is eighth out of 17 states.

Hyderabad: Hyderabad has been listed among the 21 cities including Bengaluru, Chennai and Delhi that will run out of groundwater by 2020, according to the Composite Groundwater Management report released by Niti Aayog.

With the water resource management score in Telangana state hovering over the 50 per cent mark, a medium level score, there needs to be replenishment of groundwater. AP has scored 68, which is a high score.

Groundwater levels are falling because the extraction rates are higher than recharge rates.

Mr Srikanth Ramakrishna, a rural water supply worker, said, “As the report stated, nearly 63 per cent of irrigation still makes use of groundwater. This needs to change.”

He said efforts to raise awareness about rainwater harvesting were futile. Making use of recycled water was also a good option, but borewells, the easy choice, is opted for, he said. Mr Ramakrishna said the capacity to treat waste water is much less than the amounted. 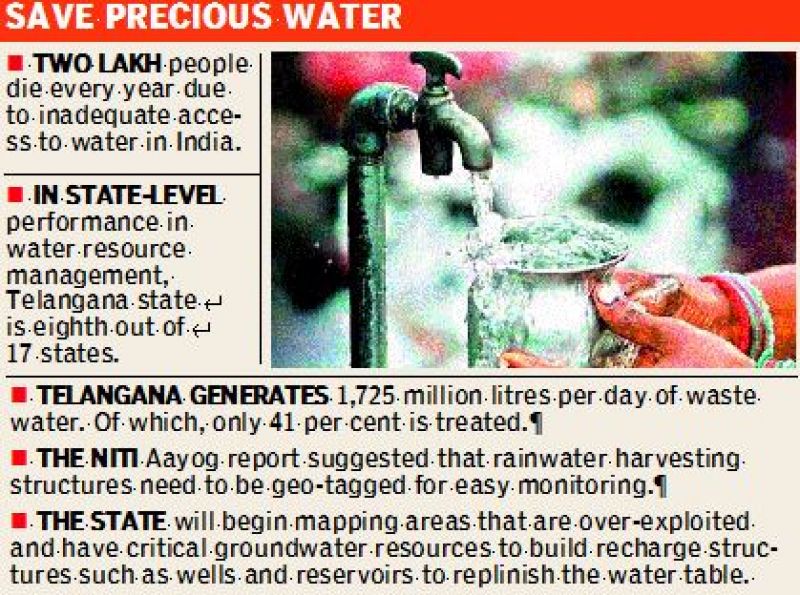 The Niti Aayog report states that only 41 per cent of waste water generated in the city can be treated.

The state will begin mapping areas that are over-exploited and have critical groundwater resources to build recharge structures such as wells and reservoirs to replenish the water table.

“Increase of concretisation and asphalt is a major cause as rainwater cannot perlocate into the ground. Instead of finishing the existing source, we should work on increasing groundwater levels,” Mr Ramakrishna said.

The report suggested that rainwater harvesting structures need to be geo-tagged for easy monitoring. The report stated that if a levy is imposed on electricity used to extract groundwater, users would be more careful.

Water efficiency in the agriculture sector needs to be improved as farmers use nearly five times more water to produce the same crops as done by Americans, Chinese and Israeli farmers.

A senior official at the Pollution Control Board said, “Groundwater turns useless if it is polluted, which was seen in Jeedimetla recently. Two pipelines were seen with chemicals oozing out. If the chemicals seep into the groundwater, it can adversely affect the health of residents.”