Plaster from walls of the historic Darulshifa hospital peeled off while some portions collapsed. (Image: DC)

Hyderabad: The Darulshifa hospital, dating back to the Qutb Shahi era, is craving for the attention of the authorities. The building is in a dilapidated condition. It also houses the famous Alawa-E-Sartooq (ashoorkhana). The Shia community leaders have demanded that it be repaired immediately.

The Darulshifa hospital has the facility for inpatients and outpatients. The hospital, according to historians had a bed strength of 300. The massive two-storeyed structure is spread over a vast area but unfortunately is ill-maintained.

“I had brought the condition of the building to the notice of the GHMC and the Archeology Department. Not much is being done to preserve it as wild vegetation is constantly growing from the walls and roof,” complained Mr Mir Diyanath Ali Khan, a local resident and regular visitor to the place. 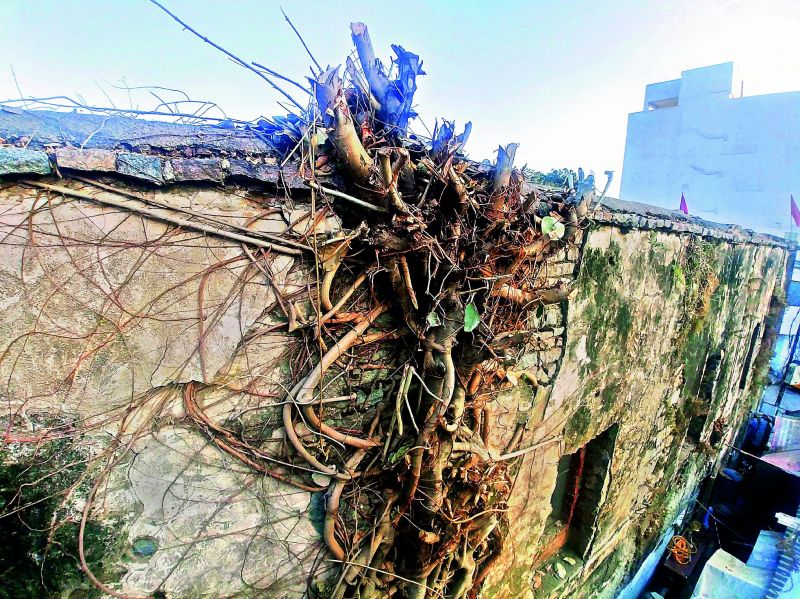 Wild vegetation growing from the walls and roof.

Damage is also visible on both the interior and exterior walls of the building apparently due to wear and tear.

Hamed Hussain Jaffery, a Shia community leader said that apart from the building, one important ‘Alam’ (standard) is installed in a portion of the hospital. The standard contains the ‘Tauq’ (shackle) that was placed around the neck of Imam Zain al Abideen when he was taken into prison by the army of Yazeed after the battle of Karbala. Haji Aga Mohsin Khorasani, advisor to Abdullah Qutub Shah, the Qutb Shahi ruler, brought the relic to the city. The relic was later installed in the Darulshifa with the belief that the patients would recover due its presence, he explained.

Former MLC Altaf Hyder Razvi said that actually, the building was delisted from the protected monuments list recently. “I had brought senior officials of various government departments to visit it. Even Deputy Chief Minister Mohammed Mahmood Ali visited the premises,” he said.

It is learnt, that there is a court case regarding the property and hence it is reportedly delaying the renovations.

Telangana treated me like a pampered child: CJI Ramana

KCR keeps audience in Siddipet in splits with humorous