The deities inside the sanctum.

Hyderabad: The afternoon silence in this little village is broken by the screaming of school children instructing the auto driver uncle to stop opposite the temple of Sri Kasi Veshweshwara temple. 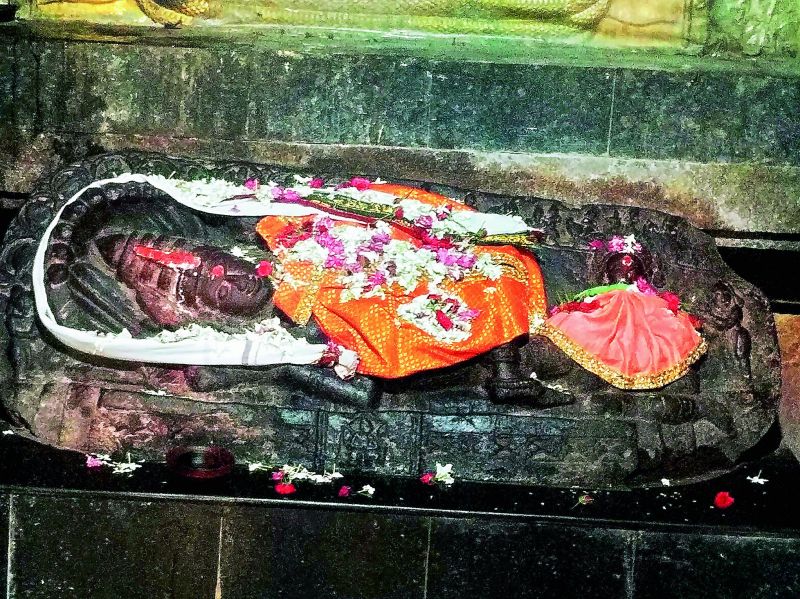 This is their favourite halt on the way home. Inside the temple though, there’s quietude. A few men are sitting in the shade taking shelter from the heat, while the old priest takes a little nap close to the sanctum. The temple and its surrounding structures are being clad in stone tiles and there is gravel and dust all around. Yet, despite the summer heat one can always see several devotees visiting the temple.

Huge steps make it difficult to reach the first mandapam, because there is no support. Luckily there are only three steps to climb and descend though it is still an effort. In fact, the entire temple seems to be an arrangement of measured stones, placed just so. It is a tough climb to the main temple, which is just opposite the mandapam where a huge Nandi sits in watchful attention.

The first mandapam has the rather large Nandi, the vehicle and good friend of Lord Shiva. Earlier, there was a statue of Lord Hanuman too, who was there because of the presence of the temple of Sri Rama (in the form of Anantha Padmanabha Swamy) and Lord Krishna. But now, because of the renovation, Lord Hanuman has been kept outside, under a tree in a supine fashion. He will probably be reinstalled soon. Both the Nandi and the Hanuman are the kshetrapalikas for the temple.

The priest, Madipati Shivaya Swamy and his wife Nagamani look after the temple and their knowledge about the temple history is also what they have heard over a period of time. Plus their own experience which has firmly established their faith in the temple.

Nagamani is the story teller here and she recalls that when one of her three sons died, her husband too had fallen sick but even after a year of treatment at the hospital, he was not cured. Once when they were returning from the hospital, they decided to rest at the temple. Miraculously he recovered and then he and his wife vowed that they would look after the temple.

Madipati Shivaya Swamy has been the temple priest for nearly 50 years now, but both return home to their two sons in the village every evening. Nagamani says that this temple belongs to the Kakatiya period. This temple was probably built in the 11th century and according to one story, it was built by Ontimitta Obalayya, the Army commander of the Kakatiya king, Prataparudra.

The architecture of this temple is really outstanding. This temple is also quite close to the 11th century Ramalingeshvara temple at Nandi Kandi, which is five kms away from here. It is also similar in design. And that was built during the Chalukya period.

In fact, the temple is also a gentle reminder of the 1,000 pillar temple in Warangal. While the pillars at this temple are similar, they do not have the adornment of the Nandi Kandi temple. Here the star shaped pillars decorate the temple and stand guard to the three garbhagrihams within.

At the centre of the inner mandapam is the tortoise with a beautiful black and white parquet design in stone. This is a Trikutaalayam, for the Garbhalayam has three idols, including that of, Kashi Vishweshwara, Ananta Padmanabha Swamy and Venugopala Swamy. The three gopurams of this temple have a stepped pyramid look, giving it an ancient look.

This temple is crowded on Shivaratri, Rama Navami and other main festivals. And it is a Hari Hara Kshetram since both Lord Shiva and Lord Vishnu exist under one roof. Sri Venugopala Swamy temple is located on the north side of the temple, where he stands with Rukmini and Satyabhama and with a shanka and chakra. Legend is that this temple was constructed on the banks of the stream flowing from Kasi and if you threw a coin, you could hear a sound of it dropping in water. Now the Koneru is dry and dusty.

Sri Kasi Vishweshwara Temple is in the south. Brass covers the stone lingam which is on a granite pillar. The huge Nandi, at the entrance, in fact faces the Anantha Padmanabha Swamy idol at the temple. There is also a smaller Nandi in front of the Shiva lingam inside. In fact there is a small Shiva lingam inside the Anantha Padmanabha Swamy sanctum with a very small Nandi, where the Lord does Abhishekam to the Shiva Linga.

According to legend, Lord Vishnu and Lakshmi knew that during the Rama avatar, Lord Rama would have to deal with a rakshasha and hence he is worshipping Lord Shiva for strength and support. There are other idols too and some of them are chipped, as are some of the pillars.

None of the people in the vicinity of the temple are aware of the history of the temple existing in their village. In fact, the only person who knew anything about the temple used to be Gajendra, a police official, who is now transferred.

There is a small Pallaki for the Lord to be carried around during festivals and it looks brand new. While the old couple looking after the temple feel blessed that they have the opportunity to serve the Lord, their one grandson Shiva Sharanam is also training to be a priest at Komaravally.

Little birds come and sit at the rim of the koneru though there is no water and villagers throng this temple during festivals, because they can worship all three Lords together.