Bandh stops Bengaluru... but for a day

Bengaluru: The public faced a lot of inconvenience on Thursday due to the Karnataka bandh, called by pro-Kannada activists demanding resolution of Mahadayi river water dispute between Goa and Karnataka.

Though the bandh was largely peaceful, people coming to the city from other places were stranded at the Kempegowda bus stand, City Railway station, Yeshwanthapur railway station and other places, as there were no buses.

With regard to Mahadayi, firstly all political parties and governments must stop politicising the issue. Every Kannadiga has a right over the water flowing from Kalasa-Banduri, and that we should be allowed to use it, which is rightfully ours. Every political party should bear in mind that once they come to power, it is no more just a mere political party, but the one which tirelessly works for the overall benefit and uplift of its people. If a party claims that it will solve the issue citing that it is in power at Centre and at the state government level, then it is a big lie. This is a common man’s fight for his rights, and I kindly request all not to politicise this issue. Let us all stand united supporting the common man, and I stand with them for the rightful cause. Further, I urge all political leaders to keep aside their political agenda, and stay away from indulging in begging for vote politics and stand united, pressing for action, for what rightfully is ours - Mahadayi. This is not an unsolvable issue, as it can be dealt with in one voice
- Prakash Raj, Award-winning actor

The only available mode of transport was the autorickshaws, but they were charging exorbitant rates. The traffic flow on city roads was thinner than usual, comprising mainly private vehicles and few cabs. The bandh also hit daily wage workers, who lost their day’s earnings as they could not reach their workplaces.

"I take multiple buses to Yelahanka, Naga wara, Shivajinagar and other places in the city every day, as I supply medical goods to pharmacies. I have been sitting at Shivajinagar bus stand since 4 pm, waiting for buses to start plying , so I can go to Majestic and then take another bus to Prakashnagar, " said Gopal Sait, who managed to hitch a ride from kind strangers in the morning. 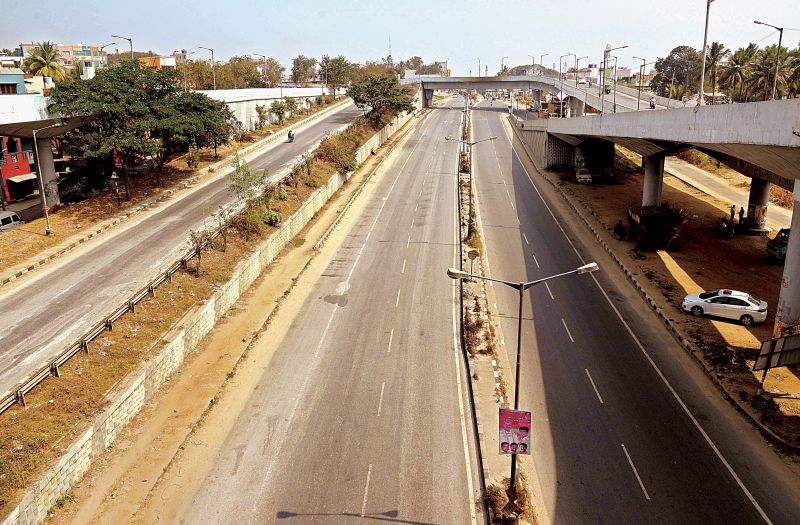 “Calling for a bandh by pro-Kannada organisations is okay, but authorities need to maintain essential services. What happens to a daily wage coolie or worker who earns Rs 200 a day and pays commission too? How will they feed their family and pay their rent?” Sait questioned.

Those stranded at Majestic were furious at BMTC’s sudden decision not to ply buses. They wanted to know, why the corporation did not inform them a day earlier. Most shops, business establishments, malls and offices in the city were shut. However, some shops located within residential areas remained open. With BMTC and KSRTC buses pulling off the roads, the Kempegowda bus stand bore a deserted look. The city returned to normal by post noon, after the BMTC and KSRTC resumed services and malls, hotels and other establishments too reopened for daily business. 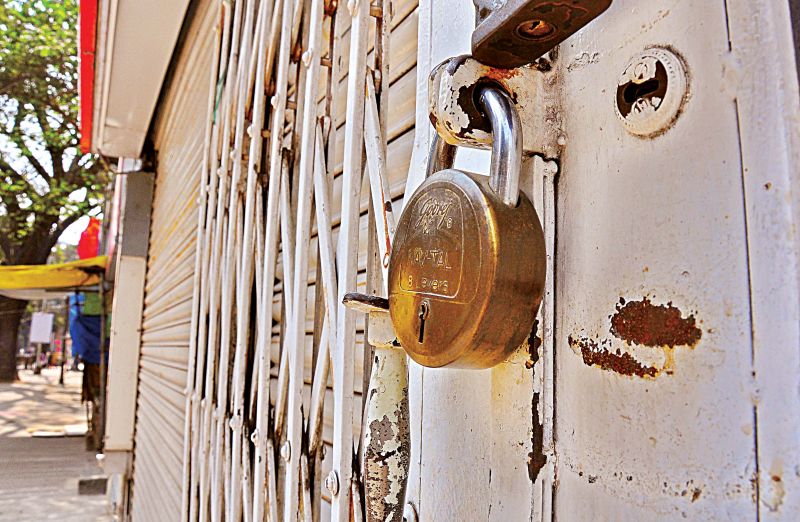 PIL against bandhs filed
A parents’ association based in Rajajinagar - Shraddha Parents Association, has filed a PIL in High Court against frequent bandhs. They stated that frequent bandhs, with the latest one being called within a period of 10 days from Thursday, was against the basic rights of the citizens and results in huge difficulties to the day-to-day activities of citizens. The petitioners wanted bandhs to be declared unconstitutional and action be taken, along with pressing for compensation from bandh organisers. The head of Kannada Chaluvali Vatal Paksha, Vatal Nagaraj has also been made a respondent in the PIL.

Prime Minister should break his silence and address our problems. It should be noted that all of us here are Kannadigas and we do not represent any political party
-Sa. Ra. Govindu, President, Karnataka Film Chamber of Commerce

KRV men protest at Manyata
Praveen Shetty faction of Karnataka Rakshana Vedike (KRV) staged a dharna in front of Manyata Tech park on Thursday morning during the Karnataka bandh. They alleged that a few IT employees were working behind the locked up doors. Shetty told reporters that IT companies have been enjoying the benefits extended by the state and state government like electricity, power and many other sops. The least that they can do is to extend their solidarity when the issue of water and border dispute arises.

They demanded police to get the offices vacated to make the bandh a total success. Subsequently, they managed to send a few people away and lock up one of the gates of the Manyata Tech park. Later, the faction took out a rally from Mekhri Circle to Raj Bhavan. Prominent leaders of the faction were detained at High Grounds police station. Protesters who gathered at majestic bus stand hurled stones at the buses to create fear among the people.

Centre should intervene, say pro-Kannada leaders
Amidst tight security, Kannada Chaluvali Vatal Paksha President Vatal Nagaraj and of Karnataka Film Chamber of Commerce President Sa Ra Govindu along with other pro- Kannada organisations took a out a rally from Town Hall to Freedom Park demanding the central government intervention to resolve Mahadayi river water dispute. They also burnt the central government in effigy and raised slogans against ministers for their callous attitude. Addressing the gathering, Nagaraj said that everyone supported the bandh, except BJP, and it is unfortunate. He added, “Our neighbouring states are giving us a tough time, but we have to stay united and face them. The Prime Minister has to intervene, failing which, we will continue our protest.” He further mentioned, “We will stop paying tax to the government and will raise black flags against all Central ministers. On February 4, we will hold a rally and intensify our protest. Let the police do what they want, but we will go ahead.” In his address Govindu said, “Modi should break his silence and address our problems. It should be noted that all of us here are Kannadigas and we do not represent any political party.” 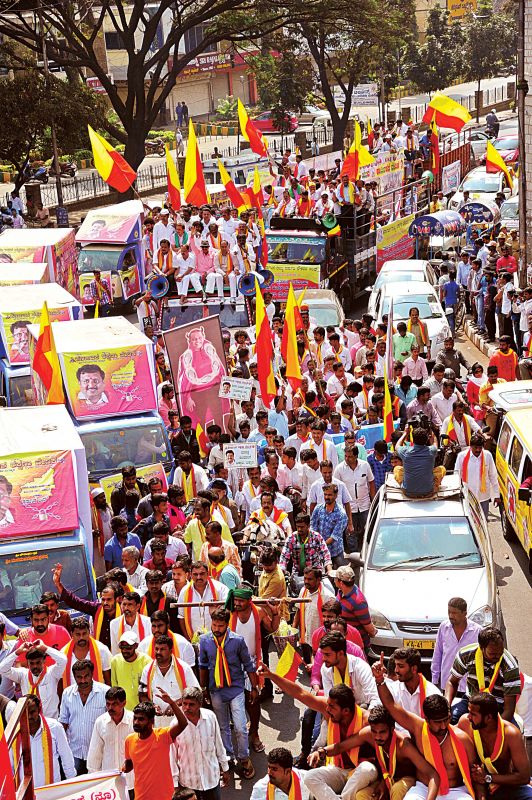 Cabbie Offers free rides
While buses stopped plying in the city because of bandh and auto drivers were fleecing passengers, a Good Samaritan cab driver was found providing free rides to senior citizens and pregnant women stranded due to bandh.The cab driver, Sabapathi, helped people stranded at Majestic bus stand and could ill-afford an auto, as most drivers were demand Rs 200 for a kilometre.Sabapathi has reportedly provided such free rides during earlier bandhs also. Whenever there is bandh he would help needy passengers.

I think bandhs have become a very popular way of raising issues, but
unfortunately they do impact the economy and people don't realise this. The cause probably is understandable, but it would be good if we could have bandhs on Sundays or holidays. Because it disrupts the
day-to-day functioning. In a country where we are looking at job creation and employment, we should ensure that these bandhs do not become an everyday affair.
— Kiran Mazumdar Shaw, CMD, Biocon

Metro turns out to be a lifesaver for Bengalureans
Metro turned out to be a lifesaver for commuters during the bandh on Thursday. However, owing to the low patronage, most entrances of metro stations had their main shutters down.
“At 8 am, a few people gathered to protest in front of Majestic Metro station, but they dispersed after intervention by civil police. So far no other incidents were reported. In the morning, we were running trains on both lines at constant interval of 10 minutes,” said Vasanth Rao, CPRO of BMRCL. "On January 25, from 5 am to 1 pm the ridership figures were lower, when  compared with normal working days. On January 18, it was 1,48,308 on the Purple line and on Thursday it was only 69,394," Rao pointed out. From 5 to 6 pm we operated metro trains at a frequency of 8 minutes as the crowd was building up. Police cars were stationed outside a few station entrances. 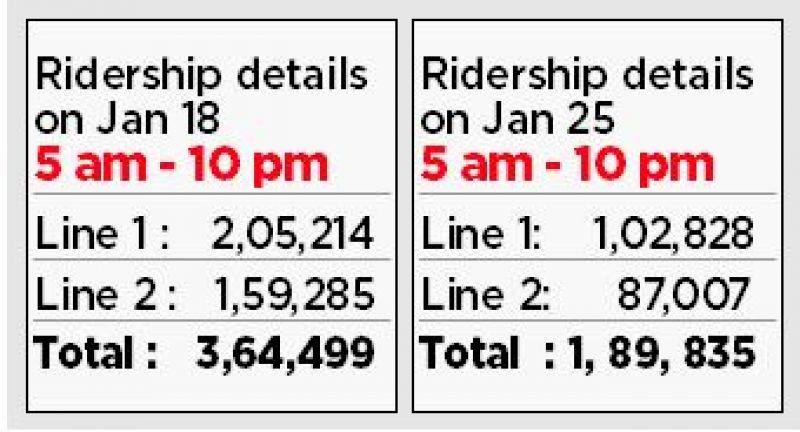 Rail roko foiled
A few protestors from various pro-Kannada outfit tried to stage a rail roko, but were detained before they could enter the City railway station.
However some women activists of these organisations managed to enter the station and protested in front of train. They were soon detained by the Railway Police office, along with the local police, an officer said.Over hundred protestors were detained and later released from various parts of the city. 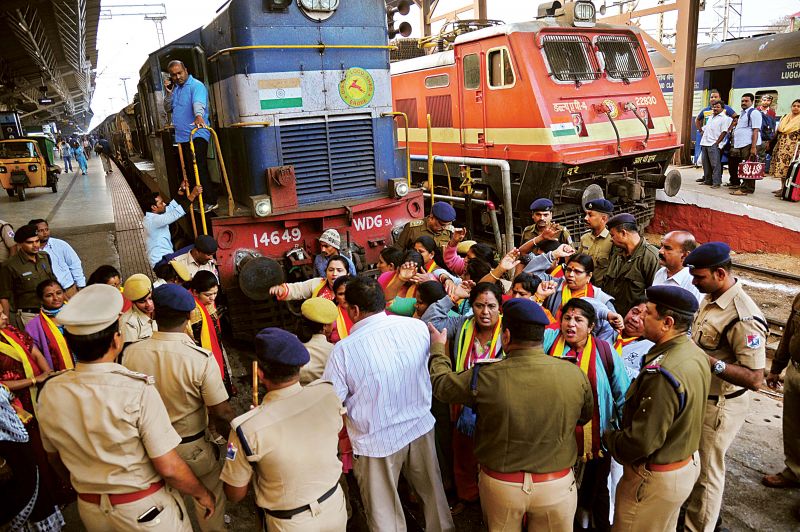