The core city area has a total of 20,000 eateries, including those that don’t have a trade licence from GHMC. (Representational image)

Hyderabad: Over 6,000 hotels, restaurants and tiffin centres, most of them under the purview of GHMC, have escaped the whip as the corporation has decided not to keep a check on hygiene.

GHMC’s approach contrasts that of the Secunderabad Cantonment Board that is on a spree sealing eateries that do not meet hygiene norms. The last inspection carried out by GHMC was in September this year, with no hotel sealed. Hotel Taj Mahal and a few more were fined for disposing of their waste into drains.

The core city area has a total of 20,000 eateries, including those that don’t have a trade licence from GHMC. Mr Omair Alam, a resident of Tolichowki who filed a complaint with the GHMC said, “A tiffin centre named Hyderabad Tiffins sells breakfast in the morning. They make dosas and idlis under very unhygienic cooking conditions. I approached GHMC to send food inspectors, but till date, nobody has turned up.’’ 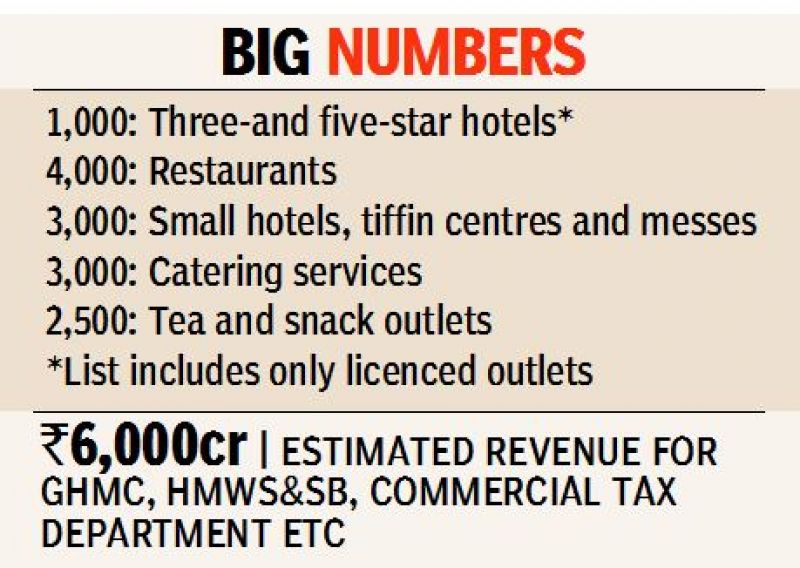 Student Akshay Methraskar, who filed an online complaint on the GHMC website said, “I have witnessed many outdated and unhygienic food standards being practiced by hotels serving afternoon meals. I can name around 10 of them that follow poor hygiene, which may lead to health hazards. The GHMC should make it mandatory for them to follow basic food standards.’’

According to GHMC records, Hyderabad scored a 30 per cent increase in the number of food joints since 2012 excluding pushcart outlets. When contacted a senior officer with the health and sanitation wing, said, “Each of the 30 circles has an assistant medical health officer, under whom the food inspector works. The inspector visits hotels and imposes fines if they are found violating norms.”

Contrary to the claim of regular inspections, the records show that the last check was carried out on September 28. Apart from Hotel Taj Mahal, Grand Bawarchi at Charminar was fined on that day. Surprise visits were conducted at 379 food outlets, including tiffin centers, hostels, dhabas and restaurants, on a single day. The corporation collected Rs 1.5 lakh through fines.

Andhra Pradesh to survey door-to-door for fever from today