National Security Adviser Ajit Doval’s office is actively monitoring the content on social media and “a very big effort” is going on to counter anti-India propaganda in the cyber space. (Photo: PTI)

New Delhi: Hundreds of fake Twitter handles and Facebook pages have been created from Pakistan since August 5 when the Indian government announced abrogation of Article 370, scrapping the special status to Jammu and Kashmir. The Pakistani troll army has taken over the social media, peddling fake videos and content to influence the international audience, human right groups and general people, which are literally keeping Indian intelligence and cyber security teams on toes.

National Security Adviser Ajit Doval’s office is actively monitoring the content on social media and “a very big effort” is going on to counter anti-India propaganda in the cyber space.

Fake Twitter handles masquerading that of retired Indian Army officers and serving Indian Army Chief too have been created for the agenda and security officials said a concerted effort is going on from Pakistan where thousands of accounts, many of which had ceded long back have suddenly got active. Many have Indian names as well.

“Several fake accounts with Indian names are being made on social media. These accounts are posting inflammatory content. It was observed that such things are being done from the Pakistan side, and a campaign is being undertaken against India on social media,” said Mr Brijesh Singh, special inspector general of police, Maharashtra cyber security division.

“Fake videos are being circulated and photos are being used out of context to show as if a genocide is taking place in Kashmir. The verified accounts in Pakistan are also sharing such fake news,” he added.

Other security officers said that though they have identified several Pakistani handles peddling fake content, Twitter has not taken them down citing their laws. “We have been talking to Twitter and insisted that this is weaponsiation of communication. Twitter knows which IPs these tweets are coming from in Pakistan yet Twitter is permitting that and has responded to us saying they will examine the request in light of company policy,” said a senior police official.

Officials added that Pakistan has engaged people in call centers and is using several people to push the propaganda showing Kashmiris in miserable conditions due to atrocities by Indian security forces. “Elaborate Tweetdecks have been created to cause Twitter storm. They maintain ways to escape from Twitter scrutiny too, amplifiers are used, they don’t repeat tweets, do not retweet within 5 minutes since Twitter has ways to check these people,” said an official. 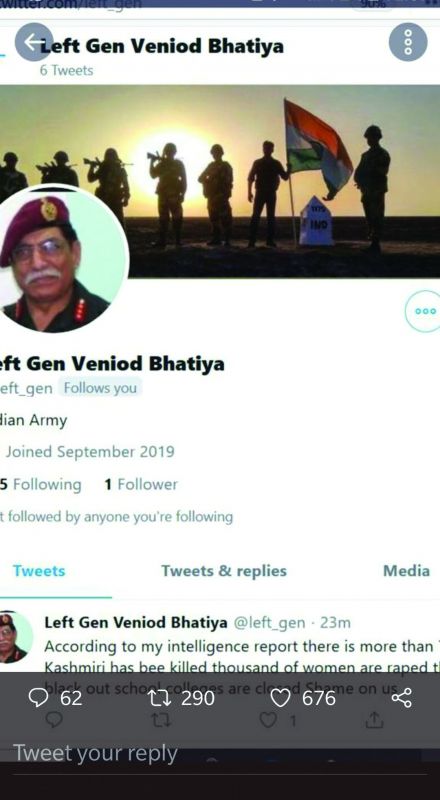 The intelligence units of the Indian armed forces too are actively countering Pak propaganda. The military community regularly monitors their own for spying and genuine errors by their personnel.

One official added that many Indians are also falling to this #Kashmir propaganda. On Tuesday a picture was on Twitter that showed young boys sitting on ground in front of Indian soldiers. “A brigadier says, The boys of #Kashmir break so quickly, we make their bodies sing, on the rack, till no song is left to sing – Agha Shahid Ali,” said a Twitter handle using #KashmirSiege #StandWithKashmir #humanrights.

This was immediately countered by JK police officer Imtiyaz Hussain, “An old pic and a fiction of a poet is being used here to spread the propaganda. The police officers are counselling the minor boys having been involved in stone pelting in year 2010. This one is a typical example of agitprop, the soviet era propaganda.”

Interestingly, a fake Twitter account of former director general of military operations Lt. Gen. Vinod Bhatia was created in September with only one follower that said, “According to my intelligence report there is more than 700 Kashmiri that killed thousands of women were raped there is completely blackout, school colleges are closed. Shame on Us.”

Indian security officials said they were anticipating this. “It is a matter of concern but not a grave situation. We had anticipated all this and were geared up to rise to the occasion and we can absorb much more. Though Pak side has swarmed social media with fake stuff, their quality is highly poor given the quantity and they have become a laughing stock,” said an official from armed forces while talking about such fake handles. He added compared to previous times, size of fake content is huge this time.

“While we observe all and request some to be taken down there are handles which we know are fake but we let it stay for a while to observe them,” said Col Aman Anand, spokesperson of the Indian Army. “They (Pakistanis) have taken lots of videos of violence from several places as violent videos are the most effective way to influence minds. When you put out images and videos of violence they numb people and they cannot think rationally,” said fake news buster Mr Pratik Sinha of Alt News. Some videos are from films, some other parts of the world and many digitally edited to create impact. “The number of such videos are usually between 10 to 40. But the issue is not their numbers but their virality,” Mr Sinha added.

In security terms, such kind of activities are referred as hybrid warfare where an opponent uses unconventional tactics including cyber attacks and spreading misinformation against opponent.