On August 9, the hills surrouding Javali and Mudigere taluk came crashing down, the heavy rain triggering massive landslides. With all access roads cut off, the villagers were stranded, with no resources apart from what they had at a hand. Heroes rose to the occasion, groups of young men transporting people to safety with their limited resources, providing food to the homeless. Volunteers cut across party lines, caste and religion - all life was deemed valuable. Well-equipped rescue teams hung on by a thread at perilous moments but these locals, who lacked equipment, training and resources, rushed into help without a moment's hesitation. Now, the danger has passed but the people are faced with the mammoth task of rebuilding what they have lost, writes Vinay Madhav

Nammudugru, Banakal Cricketers, Mudigere Rockers turn saviours
Tragedy can sometimes bring out the best in human spirit. As floods and landslides devastated  Kodagu and other parts of the Western Ghats these monsoons, some bravehearts risked their lives to go to the rescue of people stranded in the waterlogged villages and dangerous hilly terrain.

On August 9  as the hills came crashing down on houses in  Javali, Mudigere taluk, cutting off access roads and outside help, groups of young men rushed to rescue those trapped under the debris. They did what they could with their limited resources, transporting people to safety using any mode of transport available and  providing food to the homeless. 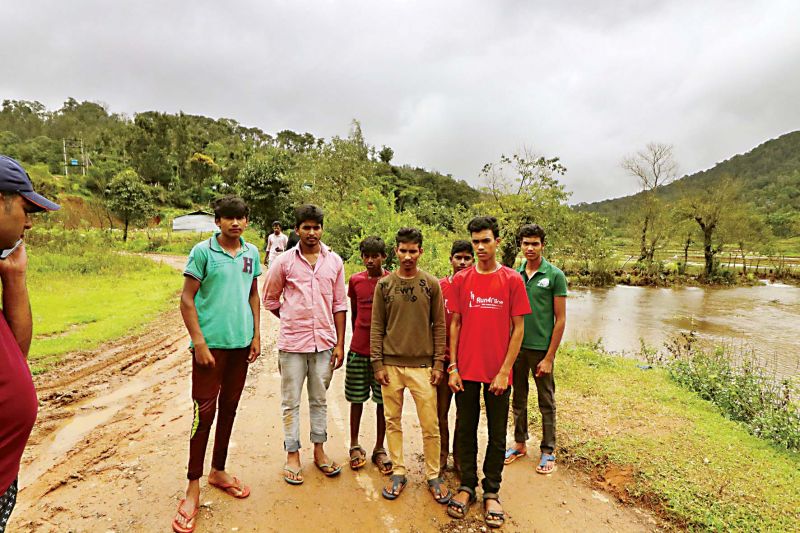 “When I first heard the news, we rushed to Kottigehara and realised  there were no access roads to Javali. I called Praneshanna (MLC M K Pranesh) and said that we needed to clear the roads. Soon all the available excavators in Mudigere were brought in and in some areas, access roads were provided within half -a- day,’’ recalled Jagadeep, a Sangh Parivar member from Mudigere, adding that people cutting across party lines, caste and religion took part in the rescue effort.
“A group called Nammudugru in Mudigere did outstanding work , Banakal cricketers provided food and essentials for one camp and another group, Mudigere Rockers provided food for another,’’ he said.

A similar story unfolded in Malemane nearby, where five of the six houses, belonging to one family were washed away, along with two small temples. In two of the houses were four women and a small boy, and as the rain refused to let -up, one of the  houses started to collapse.  Hearing their screams, a local, Mahesh and four other boys  waded into chest deep water towards the two houses. By the time they could reach them, one more was washed away and the women from there took shelter in the last house standing. 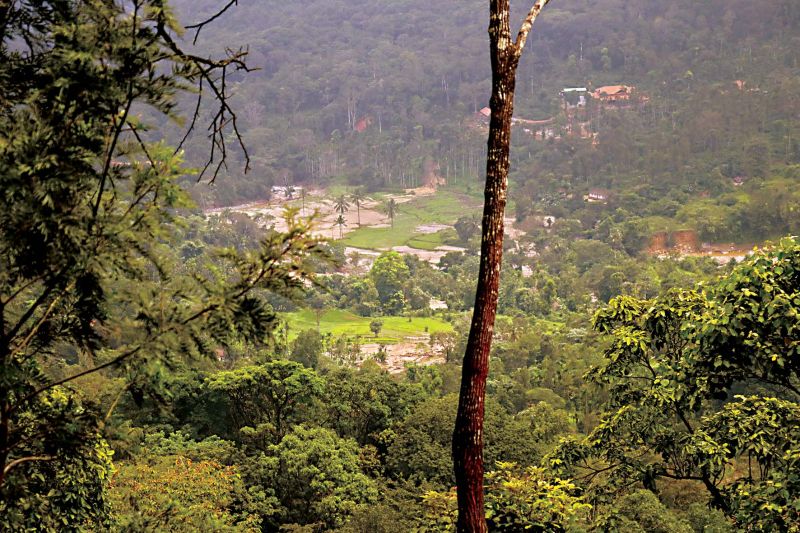 A view of the devastation caused by landslides in Mudigere (DC)

They  took the child first, promising to return, but could not as they could see nothing in the dark and the water  was rising. They waited till the morning, tied some ropes to a nearby arecanut trees and managed to reach the house. The water was touching the roof, but the  boys rescued all four women.

“Till the water came down, we did not realise the danger we were in. Rocks and huge trees were also coming down on us and we didn’t know .  Look at that car, nothing has happened to it. Even in this house, there’s water and silt in all rooms, but not in the pooja room.  God is great sir,” they  said.

“We don’t complain that district administration did not react immediately as it is very difficult for anyone to reach  this remote area. But  we don’t know what is in store for those who have lost their farmland. I don’t think government compensation will be any good as some are left with only the cloth they are wearing,’’ said Parikshit, another volunteer.

A local coffee planter, Ashwath, whose sister and mother were among the four women rescued by Mahesh and his group of bravehearts, is left with only his jeep and has no idea about the state of his 12 acre coffee estate.

“My estate is on other side of the hills, where there are heavy landslides too. There is no way we can get there for at least a week. Going by what I have been told, I doubt if anything is left there,’’ he said gloomily.

The situation is no different in Madhu Gundi, Durgadahalli or Balige, where the hills of Sunkasale, Ballalarayana Durga and Hirebail have come sliding down on the three villages, submerging houses, coffee estates and paddy fields. Tragically , a local coffee planter, Gopala Gowda was buried under silt, even as his older son watched from a distance. The body was recovered eight days later.

With the rains having since abated, the worst appears to be over, but the problems are aplenty ahead. While many roads are being cleared, some  connecting Kottigehara and Kalasa are still blocked and the damage still being assessed. Although the government compensation could be around `13,000 per acre, cultivating an acre of coffee plantation costs at least Rs 10 lakh. And the locals point out that nothing can be cultivated on the land covered with mud and debris of the hills for at least the next ten years.

It may be a herculean task to rebuild people’s lives here, but for the time being things are being taken care of as  the rescue material is pouring in with various organisations sending truckloads of rice, sweaters, shoes and blankets. Most of the beneficiaries are reportedly not locals, however, but outsiders who came here in search of work during the rain.”Everyone knows what’s happening. Most of the locals are not standing in these lines. Some have stocked over 50 kgs of rice, 10 sweaters and blankets,’’ said a local leader.

It’s not only the people who are suffering, however, but also the fish industry, which has been badly  hit due to the closure of the Charmadi ghat, which has cut off fish supply from Mangaluru to Kottigehara, Kalasa, Mudigere, Beluru and Chikkamagaluru. The fish that comes via the Shiradi ghat, is pricey and hardly affordable for many in this devastated land.

Mobile use while driving on the rise, worries traffic police