Onam feast was prepared in schools, colleges, convention halls, mosques and churches which are serving as relief camps in various districts. (Photo: ANI/Twitter)

Thiruvananthapuram: The 82-year-old Kumari just stared on as other inmates tried to lay a floral carpet on the courtyard of a flood relief camp in Alappuzha district.

"I had never ever imagined that we would not celebrate another Onam at that house in the same way," says the homemaker, overcome with memories from last year's celebrations with her family.

"Today is Thiru Onam, but we are in this relief camp. Unprecedented rains and floods have flattened our home." Kumari is among the over 8 lakh people who were displaced by the deadly floods and are now living in thousands of relief camps across the state after losing the savings of their lifetime.

The devastating deluge, which has so far claimed 265 lives, has taken the sheen out of the state's most awaited harvest festival, Thiru Onam, which falls today.

But, Onam feast was prepared in schools, colleges, convention halls, mosques and churches which are serving as relief camps in various districts. Floral carpets were also laid at the camps to soothe the worried minds of flood-hit people. 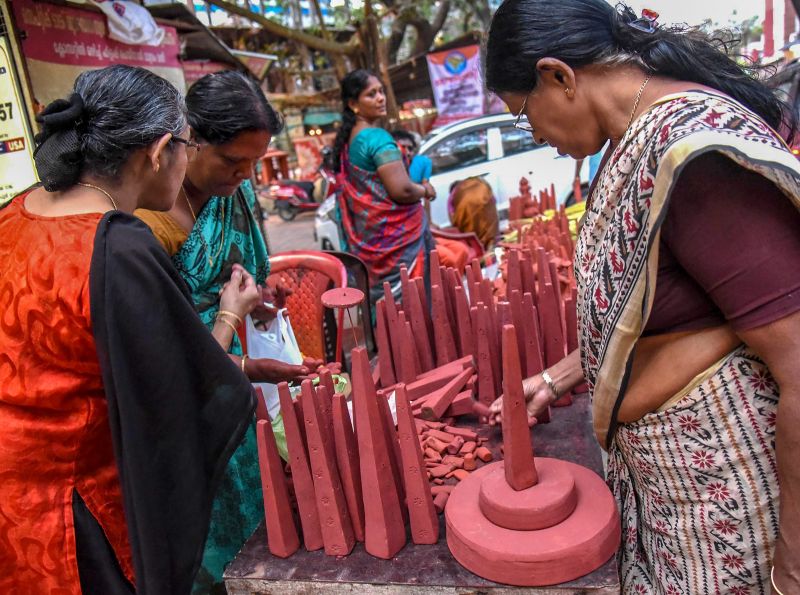 A vendor selling 'Thrikkakara Appan', the most important of Onam celebration at Kochi. (Photo: PTI)

In worst-hit Alappuzha district, Onam was celebrated at a mosque, which has been turned into a relief camp. The doors of the mosque were opened to accommodate people of all religions on August 18, a mosque committee official said.

"As we saw several houses destroyed, people being displaced, we opened our hall used for offering 'namaz' (prayers). This is in true sense religious harmony. The floods have brought people of all religions together," he said.

Bakrid was celebrated here last week and in the same spirit, Onam was being observed today and the feast was prepared by the people in the camp.

"Delicacies like aviyal, sambhar, payasam,.. all have been prepared," the mosque committee official said.

In Chengannur, a relief camp inmate said the Onam festivity may be a low key affair this time, but we will overcome and definitely celebrate next year in our homes. Young Nandana, who returned to her home from a camp in Kochi, is busy drying her textbooks and notes as the sun came out this morning.

"There is no pookalam due to floods," she said. Many in the camps, sang 'Onam pattu' (songs), laid out flower carpets and prepared 'sadya' (feast) in an effort to bring some joy into their lives mauled by the unprecedented rains and floods, the worst the state has faced in a century. Women were busy cutting vegetables and men unhesitatingly pitched in to help, to prepare the feast in many camps. In the Aluva UC College camp, children and Muslim women joined in making the 'pookalam.' 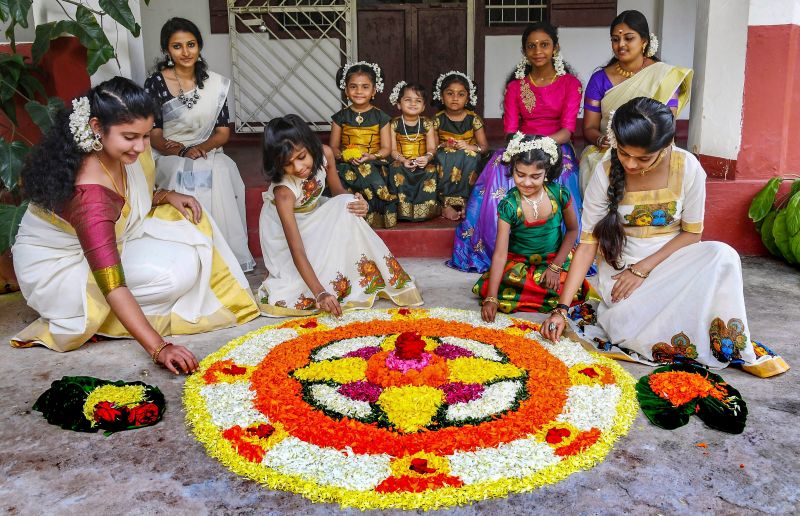 In the famous Thrikakkara temple at Kochi, dedicated to Vamana, the incarnation of Lord Vishnu, the usual Onam sadya was not held this year.

Onam is celebrated with great pomp across the state, but this time around festivities are the last thing on people's minds as they come to grips with the devastation. The usual celebrations like laying floral carpets and preparing feasts were comparatively subdued in urban areas also.

The state government has also cancelled Onam celebrations. The Kerala Tourism's decision to organise Champions Boat League on the lines of Indian Premier League (IPL) from this year starting with Nehru Trophy boat race also took a beating due to the flooding.

Pulikali (Tiger Dance), which is held in Thrissur with artisans donning tiger masks and dancing to the rhythm of traditional percussion instruments on August 28, has also been cancelled.

Onam commemorates the return of mythical demon king Mahabali to see his beloved subjects at the beginning of 'Chingam', the first month of the Malayalam Calendar.

Dalit, Rythu bandhu put all other welfare schemes under cloud in Telangana